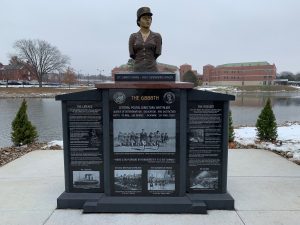 Historian Kevin M. Hymel attended the dedication of the 6888th Central Postal Directory Battalion monument at Fort Leavenworth, Kansas, on November 30. The 6888th was the only all-female, all-black unit to serve overseas during World War II.

Five members of the 6888th attended the dedication ceremony. The monument, which is located in Buffalo Soldiers Monument Park on the military installation, features the bust of Major Charity Adams Earley, commanding officer of the battalion. It also features the names of approximately 850 women who served in the battalion.

Back in 2009, Kevin wrote an article on the unit, interviewing three veterans for the story that appeared in On Point, the newsletter for the Army Historical Foundation. Kevin brings guests on the In Patton’s Footsteps Tour to the grave of one of the women of the 6888th, who is buried at the American Cemetery in Normandy.

Read Kevin’s article on this fascinating WWII unit below. He also has another article coming out on the 6888th, the story of Cpl. Lena Derriecott, one of the five surviving members, in the next issue of WWII History magazine. It will be on newsstands January 8, 2019.

The 6888th Central Postal Directory Battalion was a unique U.S. Army unit and it had the distinction of being the only all-African American, all-female unit sent overseas during World War II. The women kept mail flowing to nearly seven million soldiers in the European Theater of Operations (ETO).

Almost immediately after leaving the United States in early 1945, the women who would eventually make up the 6888th were introduced to the rigors of war. During the trip across the Atlantic Ocean German U-boats forced the convoy of troop ships to change course. The event had a chilling effect on the women. “Darn tootin’ I got scared,” recalled Mary Ragland. “Especially when you can’t see land all around” she added. Once the women arrived in England on 14 February 1945, they had another scare. As they disembarked from their ship, a German V1 rocket, also known as a “Buzz Bomb” for the sound of its engine, dove into the area. As the noise of the engine filled the air, the women ran for cover. No one was killed, but the event served as a harsh reminder that even behind the lines, soldiers were at risk at all times.

The 6888th was organized on 4 March 1945 at Birmingham, England, and pitched mail at a facility there until after the end of the war in Europe in May. With approximately 850 officers and enlisted personnel, this Women’s Army Corps (WAC) unit was organized into four postal directory companies—A, B, C, and D—and a Headquarters company, which handled all administrative and service support duties.

Major Charity Adams commanded the battalion. She had joined the Women’s Army Auxiliary Corps (WAAC—the predecessor to the WAC) in 1942 and became the first African American woman to receive an Army commission. She ended the war as a lieutenant colonel and as the highest ranking black woman in the Army.

The women of the 6888th were discouraged when they discovered warehouses crammed from floor to ceiling with mail and packages that had not been delivered for at least two years. Rats the size of cats had broken into some of the Christmas care packages for front line soldiers and eaten their contents. The women went to work, organizing a system that would break the bottleneck of undelivered mail.