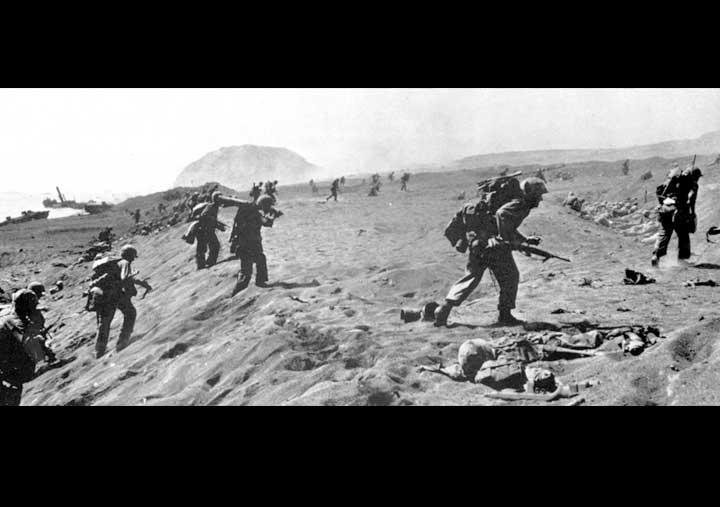 We wanted to share the following story we found on War History Online about Iwo Jima, “8 Things You Need To Know About The Iwo Jima Landings,” by Andrew Knighton.

If you don’t already know about the website War History Online,”the place for military history news and views,” you should check it out. Their guest bloggers cover wars from the ancient wars between Persia and Greece to World War II to present day conflicts. There are a trove of fascinating stories, many of them little known, and lots of wartime photos and more recent videos.

8 Things You Need To Know About The Iwo Jima Landings

The Battle of Iwo Jima was more than just another strategic island fight in the US military’s struggle with Imperial Japan during World War Two. It was a key stepping stone for the planned invasion of Japan. It was a battle with heavy losses, great heroism, and eventual controversy. And it became immortalised in one of the most famous movies in military history.

By the start of 1945, the American military were planning an invasion of Japan, intended to take that country out of the Second World War. In preparation, they began bombing campaigns against the Japanese mainland, softening it up ready for the attack. Everyone knew that it would be a brutal struggle – the Japanese were fighting tenaciously for every inch of ground, and would be even more determined in defending their homeland. But with the Manhattan Project still a closely guarded secret, to most people it looked like the only way to win the war.

Taking off from the Mariana Islands, B-29 Superfortresses took 3000 mile round trips to bomb Japan. It was a long journey, tough on the pilots, planes and fuel supplies. Flying so far from base, the Superfortresses lacked fighter protection, making them vulnerable to Japanese defenders. But there was an answer.

Iwo Jima, regarded by the Japanese as an unsinkable aircraft carrier, lay only 760 miles from Japan. The Japanese were using its fighter base and radar to take out the American bombers. Capturing it would be a double victory for the Americans – taking out those defences, and putting their own fighters close enough to support US bombers on raids over Japan.Preparing the Defences

Five miles long and two-and-a-half miles wide at its broadest, Iwo Jima was the best-defended spot in Japan’s Pacific empire. Its tough defences were manned by 21,000 soldiers led by Lieutenant-General Kuribayashi Tadamichi. Delays in launching the invasion gave General Kuribayashi time to reinforce the defences, despite bomber attacks.

Before setting foot on the island, the Americans spent days softening up their target. Air strikes, rockets, napalm and the shells of naval guns pounded the defensive positions. Some bunkers and caves were destroyed, but the Japanese remained well dug in and determined. They had been preparing for this moment for nearly a year. They would not be easily broken.

On the night of 18 February 1945, Admiral Raymond A. Spruance, overall commander of the invasion, arrived at Iwo Jima along with Task Force 58, a vast carrier fleet.

As 19 February began, landing craft headed toward the beaches under a clear, bright sky. There would be no helpful gloom or fog to help the marines and soldiers hide from enemy guns.

The first troops, mostly marines hit land at one minute to nine, welcomed by desultory fire from rifles and mortars. Crossing the beaches, they hit fifteen-foot slopes of ash that had been spewed out by the island’s volcanic mountains. This soft black mass was tough to cross, forcing men to abandon equipment to continue their advance. It was impossible to dig foxholes in ash, the upside being that it absorbed some enemy shrapnel.

The slow rate of fire from the defenders made the Americans think they would face little opposition from a broken Japanese force. They could not have been more wrong. Kuribayashi held back his men’s fire for an hour while the beaches became rammed full of troops and equipment. Then he unleashed the full fury of guns, mortars and artillery. Just after ten in the morning, a deadly barrage began.

Our Iwo Jima Tour is a Transformative Experience!

Travel with our expert historians to the islands where the battles raged during the War in the Pacific. You will learn about the American and Japanese strategies and experience the emotion of climbing Mt. Suribachi, site of the iconic raising of the flag image that will forever be etched in our minds as we remember Iwo Jima, “Uncommon valor was a common virtue.”