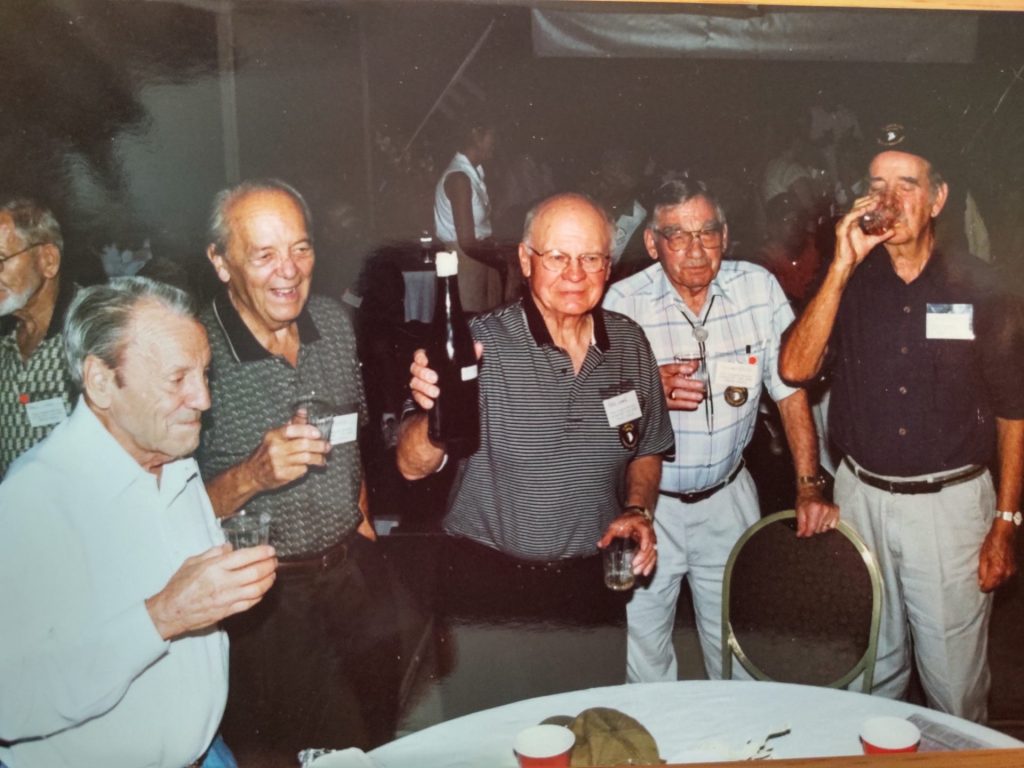 George Luz, Jr., the son of Easy Company member, George Luz, Sr., has been attending Band of Brothers reunions since 1965. Today, he shares his memories of these yearly events that brought together the men of Easy Company, and later their families, every year since 1946.

Band of Brothers Reunions: A Toast to the Fallen, A Forging of Bonds

Well, it all began in the summer of 1942 at the training camp in Toccoa, Georgia with a bunch of recruits from across the country—from New York to California, Illinois and Louisiana. All they knew was that the Japanese had bombed Pearl Harbor and they were ready to defend the country. They started with 160 soldiers and officers. They trained for about 18 months before jumping into Normandy. Their Rendezvous with Destiny began.

About 366 men went through Easy Company during the war. Forty-nine were KIA and the majority were wounded, many more than once. D-Day+464 their mission was complete, but their journey together would continue. In 1946 in Indianapolis, Indiana, their post war bond would carry on as the entire 101st Airborne Division kicked off their 1st reunion.

They continued to reunite every year in cities like Pittsburg, Los Angeles, New Orleans, Las Vegas and all across the nation, fostering their relationships made during the most difficult time of their young lives. They would toast the fallen and cherish the bonds they shared and reminisce about the funny stories that they had experienced. My sister Lana and I were lucky that our Mom and Dad included us in all these reunions starting in 1965 in Ft. Campbell, Kentucky.

During the 1981 Reunion in San Diego, Buck Compton and his wife Donna invited his E-Company buddy’s wives and family up to Whispering Palms Country Club for a kick off dinner. Throughout these reunions the wives and girlfriends played an integral role in understanding the significance of these reunions along with building a lifetime of memories. I flew in from Denver and was able to meet Buck’s daughters, Tracy and Syndee, Walter Gordon’s two daughters Linda and Bebe, and Don and Irene Malarkey’s young daughter, Marianne.  We were able to witness this reunion for what it truly was: these men were a family and a family like no other.

It was at the reunion in 1988 in New Orleans at the Monteleone Hotel that Stephen Ambrose and Ron Drez made the initial connection with my dad and the other men of Easy Company. Four years later, Stephen Ambrose celebrated the launch of his book, “Band of Brothers,” on June 5, 1992 at the Eisenhower Center at the University of New Orleans in New Orleans. The story of the men of Easy Company, like many others, was being told.

In the book, “Anatomy of a Paratrooper,” by Robert J Rader, he said, “These Reunions are becoming increasingly harder to attend. These aches and pains are manifesting themselves in these old abused beat up bodies. It’s funny a lot of these old troopers suck up that gut only at reunion time their wives say. It is on the way home from one of these reunions they say never again! This is a cue for the wife to start preparing for the next reunion, only death could keep these old farts from getting together again.”

I go back and read some of the pre- and post-reunion letters my Mom and Dad received from their E Co. family with such an appreciation of the love that they shared not only during the reunions, but throughout the entire year. When my Dad was tragically killed on October 15, 1998, I took stock of myself. At his funeral I promised him that I would be the best that I could be and I would do everything he would have done regarding his buddies and reunions moving forward. I went into his top drawer, got his roster and sent out Christmas cards to all the guys on the list, reconnecting with the men and their wives.

Around that same time, behind the scenes, Tom Hanks and Stephen Spielberg purchased the rights to two of Stephen Ambrose’s books, one of which was the “Band of Brothers,” and began the task of telling their story once again, this time on TV. At that time, it was the largest casting call in Hollywood history. It took three years and more than 100 million dollars to produce. The actual filming took around nine months. The production was headquartered at the Hatfield Aerodrome, which was an old British aerospace factory that had been converted into a massive, 1100-acre backlot.

On June 6, 2001 the Premier/Reunion of the HBO miniseries, Band of Brothers, was held on Utah Beach in Normandy France. HBO brought in around 50 Easy Company Vets and wives or guests. It also invited the family members to take part in every event and provided accommodations during that time.

There are so many memorable moments during that week, but I think the one that stands out for me is the train ride from Gare Saint – Lazare train station in Paris to Carentan. Just imagine for a moment all my dad’s buddies and their wives and families, the actors and all the wonderful people from HBO, visiting, talking, laughing, remembering old stories from past reunions and where we were that day. When we arrived in Carentan we were greeted by large group of school kids waving American flags, a hero’s welcome for these brave men who took part in liberating the France. Then we boarded buses to Utah Beach for the premier. It is a week that I will never forget!

In 2003 in Phoenix, Johnny Martin’s son Billy and his wife Jill put together a wonderful reunion in Arizona. Billy put me in charge of picking up the Vets. It was two days of back and forth to the airport—anything I could do for my Dad’s buddies and the privilege of spending quality time with them. Around 2012 in Kansas City, Paul Rogers and his longtime girlfriend Shirley hosted a reunion. At this time the men decided it would be a good time to pass the torch to the next generation to continue what they began so long ago back in Camp Toccoa. Gordon’s, Carson’s, Roe’s, Hanson’s, Malarkey’s and Guarnere’s kids or grandkids played host to the next six reunions. Scotty Gordon and his wife Barbara once again hosted this year’s reunion in no other place than the Big Easy, New Orleans, the 73rd annual reunion.

16 Million men and women served our country during WWII and it wasn’t unique that the 101st Airborne had reunions. It was quite common for these brave men and women to get together every year. Several years ago, I was invited and had the honor to attend the 29th Infantry Division’s reunion in Massachusetts. The 29th Division joined with the 1st Division to assault Omaha Beach on D-Day. It reminded me that every unit had a Major Winters, Wild Bill, Doc Roe, Shifty Powers, Buck Compton and so on and so on.

For most of us, enough time has passed to go a bit deeper with our loved ones about what they experienced during the war, but there is still time to learn more from those who remain!