Band of Brothers® Tour: "This Trip Will Stay With Me Forever" | Stephen Ambrose Historical Tours 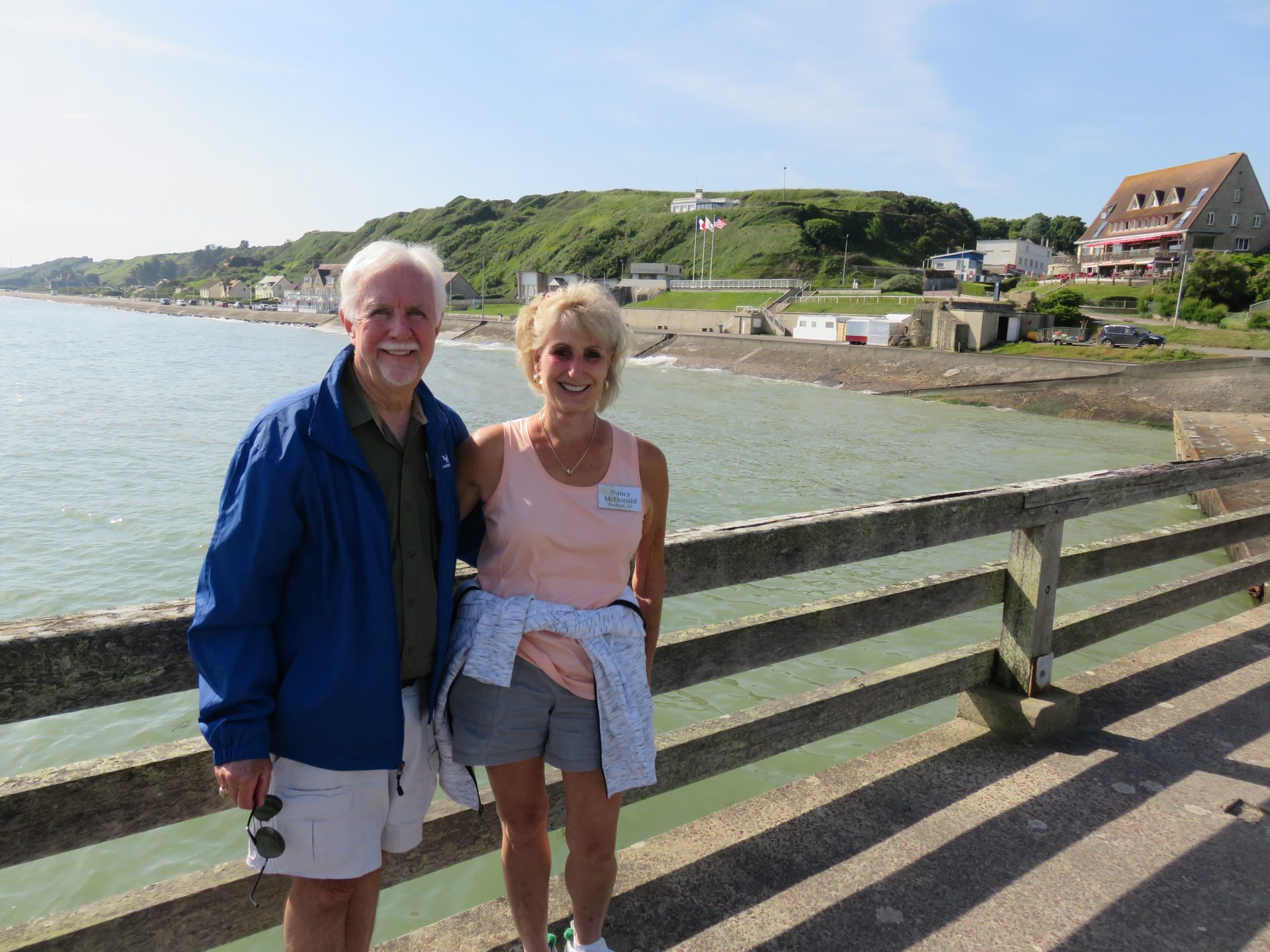 We are delighted to share this tour review from guest Nancy McDonald about the wonderful time she and her husband, Larry, had on our Band of Brothers® Tour. She is such a terrific writer that you’ll feel like you are traveling along with her as the tour winds its way from Aldbourne, England, to Normandy, Bastogne and Zell Em See.

Thank you, Nancy, for taking the time to share your experience with all of us!

Review of the Band of Brothers® Tour

Larry and I have been fortunate enough to be able to travel all over the world in the last 26 years, from the Polar Ice Cap to Antarctica, and out of 45-50 trips, this was by far the best ever. Usually after about 2, 2 ½ weeks we start missing home and our kitties, but this trip ended much too soon and it is one that will stay with me forever.

To start, the group of travelers were all so knowledgeable on the subject of WWII and Band of Brothers and this was a tour we all wanted to be on. We knew this was not just a town walking/shopping for souvenirs type tour, but an in-depth history tour. We all got along fabulously and at each group dinner, you got to know someone else a little bit better. (Every other tour we have been on there is always that ONE person who annoys the group – we didn’t have one.) A wonderful blend of people from all over the USA.

So, what made this tour so special? We all knew what we were going to see, the places we would visit, but what we weren’t expecting was our HISTORIAN (and I put that in capitals for a reason), Jonathan Carroll. By far, the most incredible guide/man/historian/bundle of energy I have ever met. You could tell how much he loved history by how he explained every detail of an operation and his knowledge of WWII. We have been on WWII tours with “experts” and they just told you what you could read in a book. Jonathan’s knowledge on the subject is astonishing. I could write paragraphs about each site, but nobody wants to read everything, so I will stick with the highlights for me. He kept us going, except for bus days we averaged between 12,000 and 16,000 steps – I gained no weight and ate like a pig.

We started at Aldbourne where Easy Company trained. In addition to pointing out the sights, Jonathan always had a personal story, like where Dick Winters went to calm his mind and reflect. To look out over Aldbourne and stand where an incredible leader stood was humbling to say the least.

We were touring in the morning before we took the ferry across the English Channel and we didn’t realize how long the ferry crossing would be, so by the time we docked it was around 10:00 PM and we were tired. Jonathan wasn’t done with us yet, though. (I thought to myself, “doesn’t this guy know we are senior citizens and we didn’t get our naps today and we need sleep?”)

He took us then to Pegasus Bridge so we could experience what the soldiers experienced when their gliders “landed,” the quiet, the only sound insects and German soldiers on the bridge. Going there at that time of night made you realize how incredible it was that this part of the D-Day invasion was accomplished. Taking us there at that time of night made me realize this was no ordinary “tour guide.” A stroke of genius.

We had been to Omaha Beach and the cemetery twice before, but for the first time I learned what a monumental feat this was. I began to learn (like a light bulb going off in my head) how all the different pieces of the puzzle had to come together in order for the invasion to succeed. At the cemetery Jonathan read something about some of the men who died that day and it brought tears to my eyes thinking of these young men (children) who gave their lives for freedom and it made you think about what they missed, getting married, having children, things like maybe one of their children would have discovered the cure for cancer. He also read us the letter written by Thomas Meehan, Easy Company’s leader who died on D-Day. What insight that man had. Thousands and thousands of graves, each one with a story, many filled with fear as they got off the amphibious boats, but vowing to protect their brothers. By reading us some of their stories made it more personal.

In addition to reading stories of individual soldiers, he must have stayed up all night researching the names of people in our group and directing them to the grave of someone who might have been a relative.

Going to Brecourt Manor and seeing exactly where Easy Company “silenced” the German artillery was amazing. We walked the path they took as Jonathan described each man’s part in the operation and where the guns were placed and how they were captured. It really makes it more real to walk their path, rather than watching it on TV, and the bravery of these men is inspiring.

We moved on to Saint Mere-Eglise and St. Catherine’s Church where Dick Winters went up into the steeple and spotted the German tanks coming. To see a mannequin of a paratrooper hanging from the steeple of a church brought home the many possibilities of in some cases, living or dying was a matter of chance based on where and how you landed.

We learned in detail Operation Market Garden, but the highlight for me was the fight at the Crossroads. Again, walking the path, climbing up the dikes, hiking over fields where the fight occurred makes it real. Jonathan led a group of volunteers of the group in the mad dash across the field so they could see what it was like, minus 60 pounds of gear.

We moved on to Bastogne, the Battle of the Bulge where my adopted father fought, and then the small villages of Foy, Recogne, Cobru. What hell those men went through. Hiking through the forest, seeing the foxholes where Easy dug in, all the time Jonathan telling us personal stories about individual men, their injuries, the death of buddies and through all of that Dick Winters and his officers kept the men focused on their goal. I understand now why my adopted father never wanted to talk about it.

In addition to the American Cemetery at Omaha, we also went to several others including the cemetery in Luxembourg where Patton is buried. Again, Jonathan had researched names in the group and directed them to the grave of a possible relative. Since I was adopted and don’t know my real name, for the first time in my 68 years I felt a loss and an emptiness. Did my father and uncles serve? Were they buried here? I felt like the kid not picked for a team as I watched the group go to their graves. So, instead I spent a lot of time at the graves of men who were never identified and just listed as a “brave soldier.” That was my connection.  We both had no family. At every grave I saw where the soldier couldn’t be identified, I said, “Thank you.”

I knew nothing about the Maginot line so I found that very interesting.

We had been to a concentration camp before in Stutthoff, Poland and it was a lot more graphic than the camp at Dachau. Once again, I struggled trying to understand man’s inhumanity to man. It is very scary to me to think something like this could happen again. I will never understand how somebody could do this to another human being. I guess I am NOT a sociopath!

Going to Berchtesgarden and seeing Hitler’s Eagle’s Nest was a high point for us. We have seen so many documentaries about it, it was unnerving to stand where this sick person stood.

We ended at Zell Am See where Jonathan and a group of our tour people “re-enacted” Easy Company’s jump to celebrate the anniversary of their jump into Normandy. I am proud of Kristine who was the only woman in our group to do the jump.

I could go on and on about the sights, the museums, the cemeteries, but the best thing about our tour was Jonathan. His descriptions of battles made you feel like you were (almost) a part of it. His knowledge is never-ending and his love and enthusiasm on the subject of Easy Company was contagious. He put the pieces together on how this operation was planned, made it personal by telling stories about each individual man, making connections of possible family members to people in our group and how this Band of Brothers stood out with the leadership of Dick Winters; local farm boys, college kids, blue collar kids who came together to fight evil, each man doing his best to protect the guy next to him. Under the leadership of Dick Winters you knew how Easy Company became a “Band of Brothers.” This tour showed the true meaning of perseverance in the face of fear, integrity, bravery, leadership, commitment and how Dick Winters instilled these in his men. What a man. I am humbled by this experience and it will stay with me until my last day.

Jonathan, from the bottom of my heart, thank you. You are amazing. I will go on any tour you lead.