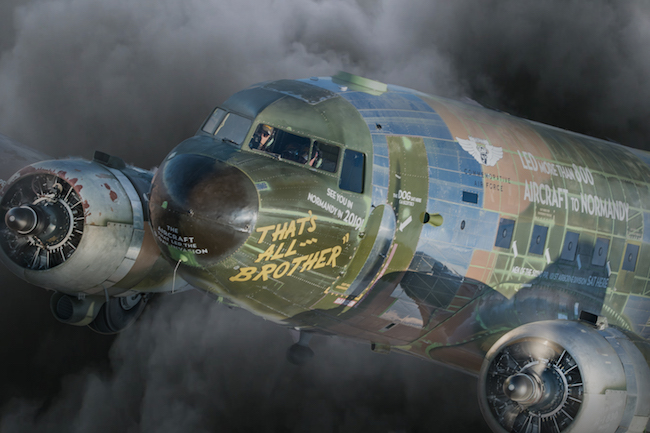 75 years ago, under the cover of darkness, over 800 aerial transport aircraft flew over Normandy, France as part of the D-Day Invasion. Dropping thousands of paratroopers and towing gliders, these aircraft participated in the mission that turned the tide in favor of the Allies in the war against tyranny.

Today, two of those aircraft are owned and operated by the Commemorative Air Force (CAF)—the famed C-47 known as That’s All, Brother and the C-53 D-Day Doll. Just four years ago, That’s All, Brother was discovered in an airplane boneyard in Oshkosh, Wisconsin – almost lost to history forever. Thanks to the donations of thousands of supporters, the CAF obtained this historic artifact and a major restoration of That’s All, Brother was recently completed. She has once again returned to the skies. D-Day Doll has her own storied history, participating in three missions on D-Day, and also serving in Operation Market Garden, Operation Varsity and the Siege of Bastogne. She became a part of the CAF fleet in 2001.

Both aircraft are used by the CAF today as tools to help fulfill the organization’s mission to educate, inspire and honor through flight and living history experiences.

In just a few short months, these two D-Day veteran aircraft will return to Europe to honor and remember all those who served and sacrificed during World War II. That’s All, Brother and D-Day Doll,  along with 20+ other aircraft from the U.S. and Europe, will cross the English Channel on June 5 to reenact that original channel crossing and paratrooper jump into Normandy—recalling the sacrifice made by so many in the fight for freedom. With the 75th anniversary upon us, it will most probably be the very last large commemoration of this historic day.

Stephen Ambrose Historical Tours is honored to have been selected by the CAF to provide a tour for a group of 70 CAF supporters/members who will be attending the 75th anniversary activities in England and France.

To learn more about That’s All, Brother, D-Day Doll, and the CAF, click here>>