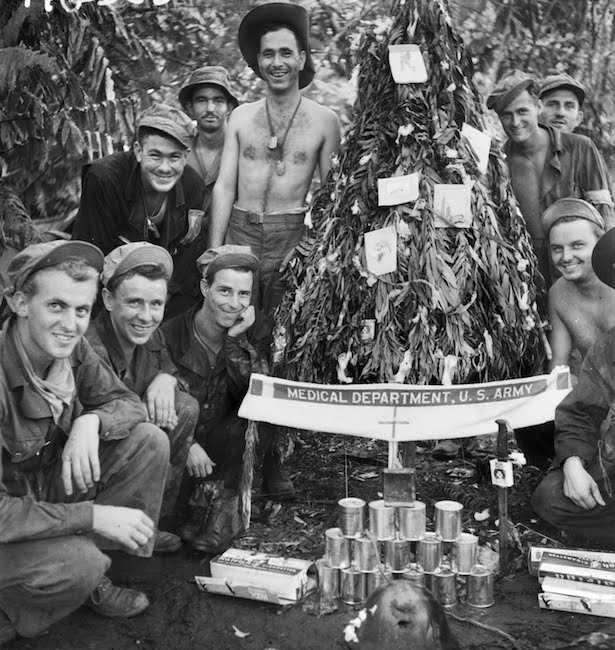 Christmas during wartime, just as in life, shines with a different glow than that in more peaceful years. Luxuries are often non-existent and even basics are scarce but soldiers and civilians find ways to celebrate. This week on History with Mark Bielski, Mark looks at the holidays in difficult times from the crowning of William the Conqueror in 1066 to USO Shows for American soldiers.

Pour yourself an eggnog, settle into your easy chair and listen to Christmas During Wartime!

Listen to Christmas During Wartime>>

Photo: Members of the U.S. Army Medical Department gather around a makeshift Christmas tree in Buna, Papua New Guinea in 1942.

About History with Mark Bielski

On the History with Mark Bielski Podcast, tune in to hear our director and historian, Mark Bielski, discuss history from ancient to modern times with experts in their fields of study, with special attention to the Civil War and WWII. He and his guests leave the textbooks behind and delve into the characters, backstories and often the intrigues that drove events throughout history.

The Story Behind My Podcast

Standing on the sacred sands of Omaha Beach during a recent summer, I was speaking about the 1944 D-Day invasion to a group. When I finished my talk, a college student began to add details about the enemy defenses. I was amazed. How did he become so interested in and informed about a war that was fought before he was born? A year later, it happened again. I was leading a tour of a Civil War battlefield, when a young man traveling with his grandfather thrilled the group with his descriptions of commanders on both sides.

Who knew there were so many budding historians?

We know that learning from our past ensures a better future. So, as an historian it is important for me to inform a younger audience, that as evidenced by these two young men, is not always given the credit due them.

Thus was born the History with Mark Bielski Podcast, a leave-the-textbooks-behind, more conversational discussion of history for a tech-savvy generation that still appeals to us “oldsters.” We all know there was a war and who was president, but what about the spies, the intrigues, the deceptions and the backstories? What about learning about the occasional farcical or comedic decisions made by serious figures and their sometime tragic results?

By telling the untold tales of our past, my guests and I are committed to making history come alive for future generations.

Listen to History with Mark Bielski>>