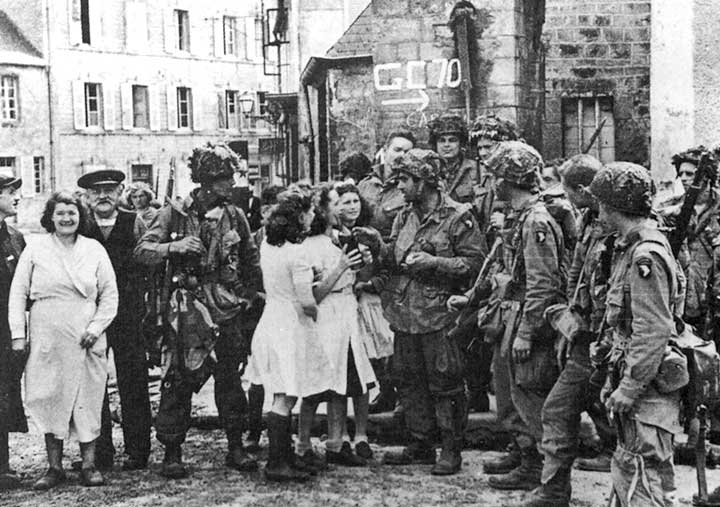 Warfare History Network has published historian Kevin Hymel’s article, “Vierville Civilians Recall Allied Pre-Invasion Bombings.” Around 3 AM on June 6, Vierville-sur-Mer locals awoke to the sound of U.S. Liberator bombers preparing the beach for the largest invasion in history. Kevin’s article is an account of the Normandy invasion from the perspective of the people who lived there.

The townspeople of Vierville-sur-Mer awoke around 3 am on June 6, 1944, to the sound of bombs. In the early morning of the Normandy Invasion, American Consolidated B-24 Liberator bombers were dropping their payloads, preparing the invasion beaches for the coming attack. “I can still see a plane with fireballs,” recalled Andrée Oxeant, who was only 14 at the time. She may have been witnessing marker flares dropping from a B-24’s bomb bay.

Thirty-one-year-old Michael Hardelay watched the raid from the window of his house, situated atop the cliffs, overlooking the water. “I saw a light coming from two bombs that exploded at the ridge of the cliff,” he recalled. “Six more bombs had fallen down on the cliff face without killing anyone, or damaging anything.”

At the sound of the bombs, most people fled their homes for their backyards, where they had dug bomb shelters, covered with logs or corrugated metal. Some ducked to their basements, a few slept through the attack. Hardelay and his parents raced for their shelter, his mother grabbing her jewelry and money before entering.

“Only Old Men With Us”

The shelters were uncomfortable. Andrée Oxeant climbed into a shelter crammed with about 30 people. “There were essentially women and children, because the husbands were fighting or captured,” she reported. “There were only old men with us.”

Most people brought nothing to eat or drink for their day-long stay. “We were very thirsty,” recalled eight-year-old Jean-Claude Ygouf, “and our lips were swollen from the shells blasting.” Twelve-year-old Jeannine Chamberlin and her parents rushed to a German horse shelter. “The German soldier took me on his lap in between the horse’s legs,” she remembered.

As the sun rose, people could see ships in the English Channel, but Michael Hardalay could only see fog from his bedroom window. “All of a sudden, the fog cleared up and unveiled thousands of boats: a superb and grandiose sight!” He called for his mother, then his neighbor, to admire the armada.

Twelve-year-old Suzanne Coliboef caught a view of the Channel from her kitchen door. “We came out and we saw all these boats.” Thirty-six-year-old Denise Ygouf, who reentered her home to retrieve supplies, was shocked at what she saw from the window: “I only saw boats and we could not see the sea anymore.”

Then the naval bombardment began. “I looked out the window and could see the Navy shells passing by,” reported Andrée Renard. The resulting shock waves shattered windows and shook home foundations. “The Navy shells were passing over us,” wrote 16-year-old Albert André, “and the Germans were firing from Trévières [four miles to the south].” Unfortunately…