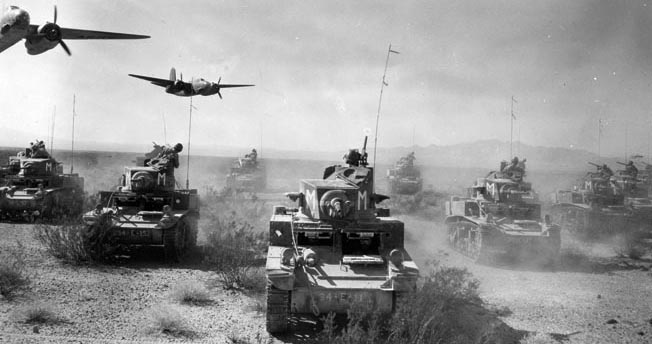 Major General George S. Patton, Jr. had no patience for soldiers disobeying the rules of combat at his Desert Training Center in Southern California. During one maneuver, he spotted Lieutenant James Craig riding in a scout car with its side armor folded down. “Looootenant!” he bellowed out in his high-pitched voice, “Get that damn side armor up!”

Craig was not about to disobey the order. “So, of course, we closed that up,” Craig recalled. It was the summer of 1942, and the U.S. Army was preparing to fight the Germans and Italians in North Africa.

Patton’s anger quickly subsided. Soon after, he put the “Looootenant” in command of 15 M5 Stuart light tanks to protect his I Armored Corps headquarters. “I didn’t think he knew my name,” said Craig. The tanks Craig would command each held a crew of five and sported a 37mm main gun and three .30-caliber machine guns. Craig named his new unit the Provisional Tank Company.

Two of the tanks were customized for the general. Both had their double-turret hatches replaced with a single large one to allow Patton easier access. “Their 37mm cannons were [also] replaced with similar looking wooden replicas,” said Craig, “and the breeches were also removed.” The accommodations would also give Patton more movement inside. Two metal flags were attached on the front of whichever tank he used: one with his two-star rank and the other with the I Armored Corps emblem. Whenever he was not using either tank, the flags were stored inside.

Lieutenant James Craig was one of Patton’s better trained soldiers. A native of Shelbyville, Kentucky, he had been training with the U.S. military since he was 16, when he attended the Citizens’ Military Training Corps (CMTC) at nearby Fort Benjamin Harrison, Indiana, in 1937. The CMTC was a summer training program that did not require enlistment. Although too young when he applied, Craig received a waiver and spent the next three summers learning how to be a soldier.

With training under his belt, Craig joined the Army at Fort Knox. His company commander made him a clerk, which he did not like. “I wanted to be in the tanks,” he recalled. He got his tank when he transferred to Fort Bliss, Texas, as a tank driver, and went from private to staff sergeant in a few months. When the camp colonel saw him training a tank company, he told him, “I don’t have any lieutenants who can train as well as you do. I’m going to send you to OCS [Officer Candidate School].”

Craig returned to Fort Knox and trained for three months to be an officer—one of the so-called “90-day wonders.” On one of his leaves, his cousin took him to Owensboro and introduced him to a young girl named Geraldine Hayden. “She was 14 and she told me she was 16,” said Craig. They spent a date sitting on a pier with their feet in the water. He saw her a few more times, and the two began writing letters.

Craig was visiting his parents when he heard over the radio that Pearl Harbor had been attacked. An announcement followed: “All military personnel report back to your duty stations.” A month after Pearl Harbor, he graduated from OCS on January 22, 1942. When Lt. Col. Stovall, the OCS commander, pinned on Craig’s gold second lieutenant bars, he told him, “I got you an assignment at Fort Benning, Georgia, with General Patton, with the I Armored Corps.” Stovall had been Craig’s company commander at Fort Knox and was looking out for him.

Craig arrived at Benning, where he became the corps’ Headquarters Company motor officer, responsible for two scout cars, two 21/2-ton trucks, and two command cars. He met General Patton briefly but did not speak to him. He also met Captain Richard “Dick” Jensen, Patton’s aide-de-camp and an avid motorcycle rider. Jensen often checked a motorcycle out of the motor pool and eventually talked Craig into riding with him. Craig had never ridden before, but Jensen showed him how. They spent their evenings riding all over the fort.

The joy riding did not last long. Patton was placed in command of the yet-to-be-established Desert Training Center, so Craig loaded his vehicles onto a train and headed west. The center, Craig recalled, “was not much to look at.” A circus-sized tent housed the officers’ recreation hall, which included a bar where officers gathered to listen to Patton tell stories about World War I. “He was very genial and nice when he talked to us that way,” recalled Craig.

Along with Patton were his chief of staff, Colonel Hobart “Hap” Gay, and one of Patton’s operations officers, Colonel Hugh Gaffey. When Craig wasn’t meeting new officers or training his men, he wrote to Geraldine. He even mailed her a promise ring, though he never spoke about marriage in his letters.

Soon after, Craig was given command of the tank company and ordered east. He loaded his tanks on a train and headed for Fort A.P. Hill in Virginia. Once there, he and his men waterproofed the tanks, including attaching large vents over the exhaust and intake pipes. Once the task was complete, the train headed to Norfolk, where the USS Ancon, an ocean liner now serving as a troop ship, waited at the pier.

The next morning, the ship’s crew loaded the tanks into one of the holds. Craig slept in a stateroom with nine other officers in three triple-decker bunks. “I had the top bunk,” he recalled. Most of the troops aboard were members of the 3rd Infantry Division. Once the ship set sail on October 24, the men learned they were heading for North Africa, which surprised Craig. “What the hell are we doing in Africa?” he asked his fellow soldiers. “The war’s in Europe.”

Craig was now part of Patton’s Western Task Force for Operation Torch, the Allied landings in North Africa. Patton’s mission was to capture Morocco, the only Atlantic-facing objective; the Eastern and Central Task Forces would assault Oran and Algiers on the Mediterranean coast.

Patton’s force would assault three areas: Port Lyautey in the north, Fadala Beach near Casablanca in the center, and the port of Safi in the south. They would not be fighting the Germans, but the Vichy French, who had sworn allegiance to Nazi Germany after their defeat in 1940. Craig would be landing at Fadala Beach.

Kevin traveled to Morocco in 2016 to explore the landing beaches and various World War II sites where General George S. Patton, Jr. started to World War II: Operation Torch. It was a powerful moment. You can read his account here: