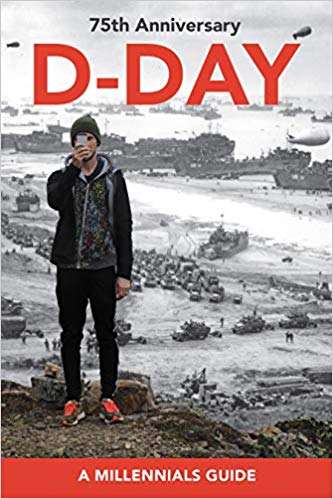 We are excited about the release of “D-Day 75th Anniversary – A Millennials Guide.” The new softcover book features 18 contributors and offers fresh perspectives and travel features on the iconic event of WWII for all ages and interest groups. One contributor is our own Senior Historian, Chris Anderson. Chris wrote two chapters for the book, “Indispensable Allies in Operation Overlord” and “In the Footsteps of Heroes: Touring DIck Winter’s Day of Days.”

As Chris says about the importance of the book, “I agreed to write for the project because we all work for a company that was founded by a man who dedicated his life to educating people about the importance of history and the part played by ordinary people. The only way that we can ensure that Dr. Ambrose’s legacy continues is if we do whatever we can to educate future generations on the importance of the past. Working on a project focused on millennials, who were born long after the war and who may not even know a veteran personally, seemed like a perfect way to continue with that mission.”

The 336-page softcover book is part history, part travel guide and includes comprehensive information on all the 2019 events in Europe and North America that commemorate the 75th anniversary of the most recognizable event of World War II, the D-Day landings on June 6, 1944. Eighteen contributors – historians, journalists, entertainment and travel writers – have written chapters for this unique work, which is meant to engage younger readers but which also has much to offer even the most knowledgeable World War II reader and traveler.

With topics ranging from why the world was so consumed by war in the early 20th century and the impact of WWII on the world of today, to a trip through the English pubs where American pilots relaxed and the making of the iconic D-Day film Saving Private Ryan, D-Day 75th Anniversary – A Millennials Guide provides entertaining reading from the armchair or the road. Every major event of the D-Day anniversary will be attended by world leaders, celebrities and surviving World War II veterans and their families. This guide is the only way to insure those who plan to be in England, France or elsewhere for these events, or those that follow them in the media, will not miss any historic moment. The travel value of the guide does not end on June 6 either. Seasonal and permanent historic locations, museums and exhibits are also covered in detail.

Beyond the sites and events, the book explains in gripping detail all the personalities and battles that began the trail leading to the final defeat of Hitler and Nazism, the freedom of Europe and the end of the Holocaust. A flowing narrative is enhanced by photos, illustrations and specially created historical and tour maps. D-Day 75th Anniversary – A Millennials Guide was designed and written to engage techno-savvy individuals of the 21st century and let them know that without the D-Day landings and campaign, current technology and the freedom to enjoy it would not be available. The failure to defeat the Nazis would have plunged the world into a chaotic period of more mass killings, absolute military rule and surrender of all independent thinking,” explains editor Jay Wertz. “We cannot overemphasize the impact the ‘Greatest Generation’ has had on the world as we know it.”