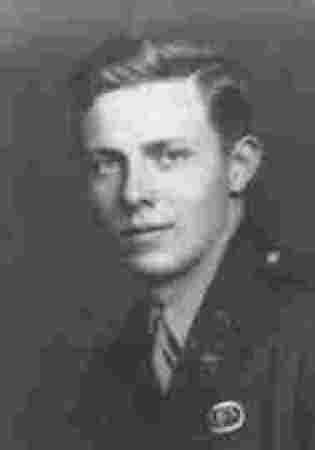 When you watch this video of Stephen Ambrose reading the letters that D-Day hero First Lieutenant Thomas Meehan III wrote to his wife be sure to have your hanky handy.

Lt. Meehan was a commissioned officer with Easy Company, 2nd Battalion, 506th Parachute Infantry Regiment, in the 101st Airborne Division of the United States Army during World War II. He was killed on D-Day when the aircraft he was aboard was shot down by ground fire.

If you have watched the epic HBO miniseries Band of Brothers, which Dr. Ambrose executive-produced and was based on his best-selling book by the same name, you will remember that Meehan was portrayed in the series. At the start of the D-Day invasion several members of Easy Company landed in and around Ste-Mere-Eglise, France, including Richard Winters, Carwood Lipton and Bill Guarnere. This is where Dick Winters took command after Lt. Meehan’s tragic death.

From the “Prologue” of Beyond Band of Brothers: The Memoirs of Major Dick Winters by Dick Winters, Cole C. Kingseed:

“As jumpmaster for my plane, I stood up and hooked up my static line, went to the door, and had a look.  I could see the planes in front and behind us in V of V formation, nine abreast.  They seemed to fill the air; their power filled the sky.  Then I looked at the English Channel and I could see this vast magnitude of ships of all sizes, steaming in the same direction that we were going—the Normandy peninsula.

. . . . We passed those two islands offshore [Channel Islands, Guernsey and Jersey]; all water, nice formation, no fire yet.  Then we were over land.  Standing in the door, I could see the antiaircraft fire, and as we approached what turned out to be Ste. Mere-Eglise, I observed a big barn burning, as well as the landing lights that had been set up by the pathfinders. As the Germans illuminated the night with searchlights and antiaircraft fire, the pilots naturally began taking evasive action.  We came in too fast and too low.  I did not realize at the time, but the plane carrying Lieutenant Meehan was hit and plunged toward the earth, killing Easy Company’s entire headquarters section save myself.”

As noted in Wikipedia:

As After serving in Company “B” (Baker) after arriving in the United Kingdom, Meehan transferred to Company “E” (Easy) to replace Captain Herbert Sobel, who had been transferred to command a parachute training school for non-combat officers.

Lt Meehan and the 16 members of Easy Company’s HQ Section flew to Normandy aboard a C-47 Skytrain of the 439th Troop Carrier Command, one of thirty-six forming Serial 12 of Mission Albany, and was headed for Drop Zone C (1 mile West of Sainte Marie-du-Mont).

The aircraft was hit by German anti-aircraft fire. An eyewitness in another aircraft said “the plane left the formation and slowly initiated a right turn. I followed it with my eyes and noticed its landing lights coming on, I thought it was going to be all right. Then, suddenly, it came crashing down [into] a hedgerow and instantly exploded.” The plane crashed near the village of Beuzeville-au-Plain (approximately 2 miles northeast of the town of Sainte-Mère-Église), killing the crew and the paratroopers aboard, including Company “E”‘s entire company headquarters group. The wreckage of the plane wasn’t confirmed found until the early 1950s; until that time he and all the men on the plane were declared missing in action. A memorial was later erected near the site.

Before takeoff, Meehan wrote a letter and handed it out the door of the C-47 to be sent to his wife.