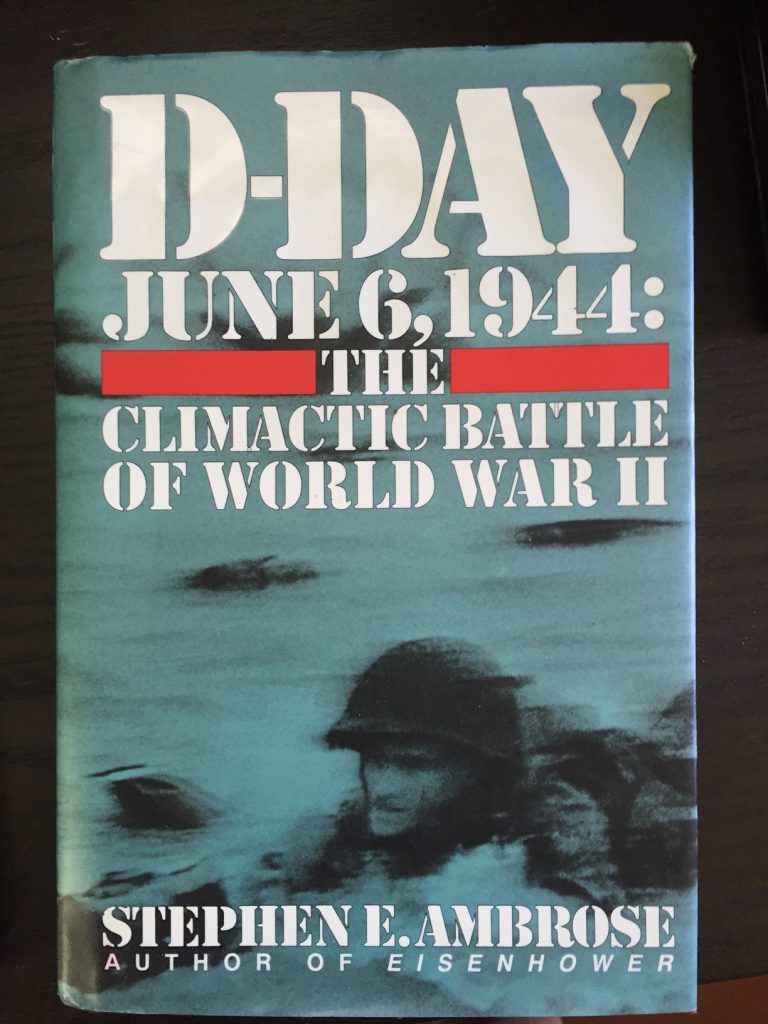 If you are joining us on one of our D-Day tours — D-Day to the Rhine or Operation Overlord — we highly recommend you read Eisenhower biographer and World War II historian Stephen E. Ambrose’s seminal work, D-Day: June 6, 1944: The Climactic Battle of World War II. This book will give you a deeper understanding of the battles of Omaha and Utah beaches from a first hand perspective of the men who fought, although as Dr. Ambrose said himself, “The best way to understand history is to study the places where it was made.”

Even if you haven’t yet decided to travel with Stephen Ambrose Historical Tours on one of our WWII tours, as John Keegan, author of A History of Warfare says about D-Day: June 6, 1944, “A magnificent history of D-Day, which is also a compellingly, grippingly readable book.”

D-Day: June 6, 1944, which is based on 1,400 oral histories from the men who were there, reveals that the intricate plan for the invasion of France in June 1944 had to be abandoned before the first shot was fired. The true story of D-Day, as Ambrose relates it, is about the citizen soldiers — junior officers and enlisted men — taking the initiative to act on their own to break through Hitler’s Atlantic Wall when they realized that nothing was as they had been told it would be.

As Ambrose is quoted in the book, “The American citizen soldiers knew the difference between right and wrong; and they did not want to live in a world in which wrong prevailed. So they fought, and won, and all of us, living and yet to born, must be forever profoundly grateful.”

The action begins at midnight, June 5/6, when the first British and American airborne troops jumped into France to launch the invasion. It ends at midnight, June 6/7. Focusing on those pivotal twenty-four hours, this is the story of individuals rather than units. It moves from the level of Supreme Commander to that of a French child, from General Omar Bradley to an American paratrooper, from Field Marshal Montgomery to a British private, from Field Marshal Rommel to a German sergeant. Ambrose cover the politics of D-Day, from Churchill’s resistance to the operation to Stalin’s impatience and Roosevelt’s concern. On the other side were Hitler’s command structure, German policy, and the plot against the Fuhrer.

This is the epic victory of democracy in winner-take-all combat. When Hitler declared war on the United States, he bet that the young men brought up in the Hitler Youth would outfight the Boy Scouts. In this book, Ambrose shows how wrong he was.

C-Span’s Book TV aired a terrific interview with Stephen Ambrose after D-Day: June 6, 1944 was published, where he talks about the 14,000 interviews he conducted with D-Day veterans and his research.

Inspired? There are still a few seats left on our D-Day to the Rhine Fall Tour!

There is no time like the present to cross our D-Day to the Rhine Tour off your bucket list. We still have a few seats left on our September 23 – October 5, 2016 tour. Enjoy beautiful weather, fewer crowds and the company of historian Ron Drez, who will share the personal recollections of D-Day veterans in the very spots where they fought.

Learn more about our D-Day to the Rhine Tour!