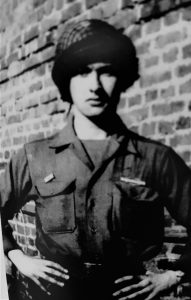 “The American citizen soldiers knew the difference between right and wrong, and they didn’t want to live in a world in which wrong prevailed. So they fought, and won, and all of us, living and yet to be born, must be profoundly grateful.”

As the 75th Anniversary of D-Day approaches, from time to time we will be paying tribute to some of these citizen soldiers. Today, we’d like to honor John Robert “Bob” Slaughter, who landed on Omaha Beach on D-Day and was instrumental in founding the National D-Day Memorial. Thanks to John Long, the memorial’s Educational Director, for sharing an excerpt of Bob’s memoir with us so we could share it with you.

Roanoke native John Robert “Bob” Slaughter joined the Virginia National Guard during the Depression at the age of 16, attracted by the adventure, impressive uniform, and $1-a-day stipend. Little did the lanky teenager know where history would take him. 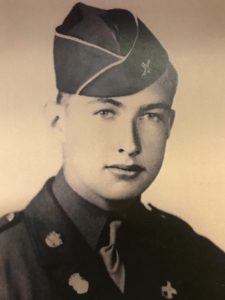 Slaughter’s unit, Co. D of the 116th Regiment, was called into regular army service along with the rest of the Virginia National Guard in February 1941, while the nation was still at peace. By December that year the US was at war, and soldiers like Bob understood they were in it for the long haul.

Now part of the 29th Division, the 116th was sent to England to prepare for the eventual Cross-Channel Invasion. That well-trained and well-led unit would be chosen as some of the very first men to land.

On D-Day, 6 June 1944, Slaughter found himself on Omaha Beach facing murderous German defenses. He would survive that day, and the rest of the war, receiving two Purple Hearts and two Bronze Stars for his service. But he thought himself no hero, and never forgot his brothers-in-arms who did not come home. 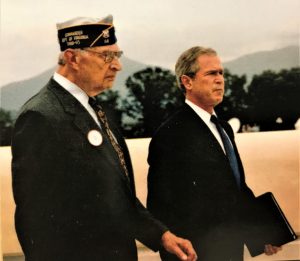 Like many veterans after the War, Slaughter spoke little of his experiences until he approached retirement age. He then began to speak and write about the men of D-Day, seeking to remind a free nation of the sacrifices his buddies had made. Concerned that there was no monument in the nation to honor them, Bob and some of his fellow veterans formed a committee to establish a National D-Day Memorial. As he spoke to audiences around the globe about the project, Slaughter became arguably the best known D-Day veteran in the nation. His dream was fulfilled on 6 June 2001, when the National D-Day Memorial was dedicated in Bedford, VA.

The selection of his wartime memories synopsized here was adapted into his autobiography, published in 2007. Bob Slaughter died in 2012.

Prior to loading, friends said their goodbyes and good luck. I remember finding Jack Ingram, an old friend from Roanoke, who had his equipment together and was waiting for the order to load. I asked him how he felt. He said, “I’m OK, good luck, see you on the beach.“ Another Roanoker, Sergeant George D. Johnson, approached me and said “Are your men ready“ I couldn’t imagine why he asked me that, but I answered, “They are ready.” Both men were killed within hours.

Each of us was given a letter signed by the Supreme Commander, General Dwight D. Eisenhower, telling us that we were about to embark upon a great crusade. I had my buddies sign mine and I carried it in my wallet throughout the war. The message was also read over the loudspeakers.

On deck, Sergeant Robert Bixler, Shamokin, PA, said in jest, “I’m going to land with a comb in one hand and a pass to Paris in the other.” The feeling amongst most of the men was that the landing would be a “walk-in affair” but later, we could expect a stiff counterattack. This didn’t worry us too much because by then tanks, heavy artillery, and air support should bolster our defense until the beachhead grew strong enough for a breakout…

We loaded into our assigned stations on the landing craft and were lowered into the sea by davits. The channel was extremely rough and it wasn’t long before we had to help the craft’s pumps by bailing water with our helmets. The cold spray blew in and soon we were soaking wet… A few thousand yards from shore we rescued three or four survivors from a craft that had sunk. We left the rest in the water as we did not have space. I could see the battleship Texas firing it’s 14-inch guns broadside into the coastline in minutes, the giant swells from the recoil of those guns newly swapped it, and it added to the sickness and misery. The bilge pumps couldn’t keep pace with the incoming sea water.

About 200 or 300 yards from shore we encountered artillery fire. The British coxswain said that it was time to lower the ramp and for us to quickly disembark. I was stationed near the front of the boat and heard Sergeant Norfleet counter with, “These men have heavy equipment and you WILL take them all the way in!“ The coxswain begged, “We’ll all be killed!” Norfleet unholstered his .45 Colt pistol, and put it to the sailor’s head and said “ALL THE WAY IN!” The craft proceeded, plowing through the choppy water, as far as it could go. My thinking, as we approached the beach, was if this boat didn’t hurry up and get us in, I would die from seasickness.

We realized then that this was not going to be a walk-in. No one thought that the enemy was going to give us this kind of trouble on the water’s edge. We expected A and B company to have the beach secured by the time we landed. The reality was, in the sector where we touched down, no one had set foot there. This would turn some of the boys into men, some would be very brave men, others would soon be dead men, but all of those that survived would be frightened men.

As we approached the beach the ramp was lowered. Mortar and artillery shells exploded on land and in the water. Unseen snipers concealed in the cliffs were shooting down at individuals, causing screams from those being hit. The water was turning red from the blood. The noise was deafening. The smell of cordite was something that would forever become fixed in my mind, always associating it with death and destruction…

As my turn came to exit, I sat on the edge of that bucking ramp trying to time my leap. I sat there too long, causing a bottleneck and endangering myself as well as the men that followed. The 1-inch steel ramp was going up and down in the surf rising as much as six or 7 feet, and I was afraid it would slap me in the head. One of the men was hit and died instantly. There were dead men in the water and there were live men as well. The Germans couldn’t tell which was which. All were coming in with the tide. It was extremely hard to shed the heavy equipment, and if one were a weak swimmer, he could drown before inflating his Mae West. I had to inflate mine to get in, even though I was a good swimmer…

It became apparent that it was time to get the hell across that beach. Initially I tried to take cover behind one of the heavy timbers and then noticed an innocent-looking mine tied to the top. Getting across the beach became an obsession. The decision not to try never entered our minds.

While lying on sand behind one of the log poles, I watched a G.I. get shot trying to cross the beach, running from my right to left. He probably was from the craft that touched down about 50 yards to my right. An enemy gunner shot him, and he screamed for a medic. One of the aidmen for my team quickly moved to help him, and he was shot. I’ll never forget seeing that medic lying next to that wounded G.I. and their screaming. They both died in minutes right there.

The tide was coming in, and later waves of men were due to come in, so we had to get off. I had my rifle ready to fire, safety off, and had fixed bayonet before disembarking.

I gathered my courage and started running as fast as my long legs could carry me. I ran as low as I could to lessen the target, but since I am 6’5” I still presented a good one. I had a long way to run, I’d say a good hundred yards or more. We were loaded down with gear and all of our clothes were soaking wet. As I ran through a tidal pool with about 6 or 8 inches of water I began to stumble. I finally caught my balance and accidentally fired my rifle right by my foot…

I looked back for the first time and got a glimpse of the armada out in the channel. It was a sight to behold. The first thing I did was to take my assault jacket off and spread my raincoat so I could clean my rifle. It was then I saw the bullet holes in my raincoat…

On the beach, at the base of the hill, men began to congregate. Regimental commander Colonel Charles D. W. Canham appeared, right arm in a sling and holding a .45 Colt in his left hand. He was yelling for the officers to get the men off the beach. Canham received the Distinguished Service Cross for his leadership and getting the men moving off the deathtrap at Omaha. His 116th Regiment was awarded the Presidential Unit Citation for its deeds and sacrifices on D-Day.