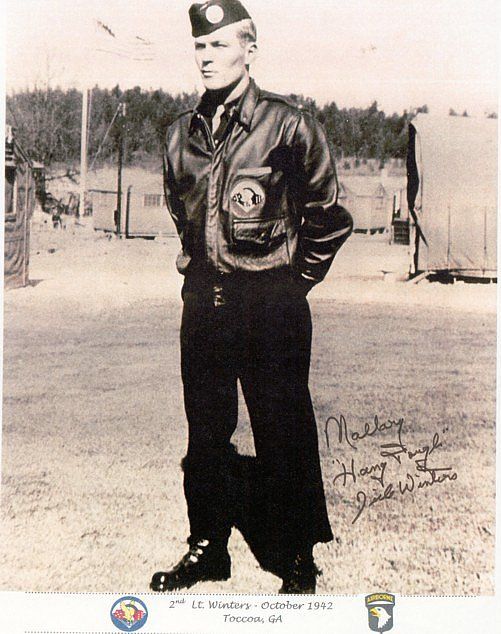 I’ve been thinking about my friend and mentor Richard “Dick” Winters a lot recently. Probably because this is the time of year when I’m usually in the midst of a Band of Brothers® Tour and I’m missing the thrill of showing people where Easy Company made history. Since the COVID crisis has prevented me from walking the ground, I thought there might be some interest in how the original Band of Brothers Tour came to be.

Almost twenty years ago this summer I was sitting in Winters’ office and we were talking about Easy Company and the lasting effect it had had the lives of all of the men who had served in it. This wasn’t all that unusual. When I lived in the metro Washington, D.C. area I would make the drive up to Hershey, Pennsylvania, about twice a month to visit with Winters and his wife Ethel. Sometimes we would talk about the war, other times sports—for him football, for me hockey. He’d give me advice on my career and offer his opinions on the magazine I was editor of.

This visit, however, was different. On this occasion I would be pitching Winters on the idea of a Band of Brothers® Tour. My bosses at the magazine had been approached by Stephen Ambrose Historical Tours about co-sponsoring a tour, and since I knew many of the men of Easy Company, they had suggested I ask Winters if he would be willing to help. I didn’t think this would be a problem. I was due to make the drive to the Winters’ house to tell them about my recent trip to Normandy and Bastogne and said I’d mention the tour idea then.

As always, Ethel greeted me at the door when I arrived, and over lunch they both asked me about my recent trip and the family. I loved these lunches. It was a chance to catch up with dear friends and hear about what was happening with other men of the company—and eating potato salad with cutlery bearing the monogram “AH” that my host had brought back from Berchtesgaden was always a thrill. After lunch, we went up to the office, and I had barely sat down before the Major started peppering me with questions about Normandy. These were not your ordinary “ask a friend about their vacation questions,” but extremely detailed ones. Even after more than half a century Winters wanted to know exactly what I had seen and, most importantly, what I had learned. I remember we talked about the approach to Brecourt Manor alone for more than an hour.

The afternoon was rapidly flying by, and I hadn’t even mentioned the purpose of my trip. Finally, I said that one of the reasons for my visit was that I’d been asked to put together a tour of Normandy, the Netherlands and Bastogne and that I’d like his help. I was a bit taken aback when he said he didn’t think it would be such a good idea. What, he said, was the point of just driving people around Europe to gawk at some old battlefields? He wished me well but said I didn’t need him for what I’d proposed.

On the long drive back to D.C. I thought a lot about Winters’ rejection. It was not what I had expected. How, I wondered, was I going to spring this on my boss and what was I going to do next? As I pondered all of this, I went over the details of my visit, trying to sort out what had caused him to say no. It was when I remembered the questioning about the details of my own trip to Normandy that the lightbulb went off. It was vintage Winters. I knew from my previous visits that no matter how casual a conversation started, when it came to discussing the war and the company, Easy’s old commander was VERY serious. It was not a subject to consider lightly or hastily. In terms of the tour, it was my “Aha” moment.

As instructed, when I got home that evening I called the Major to let him know that I’d arrived safely. Before we hung up, I interjected that I’d like to ask him to reconsider the tour. I told him that what I wanted was to put something together that focused solely on Easy Company, a Band of Brothers “master class” if you will. He immediately said yes. The only conditions that he had were that he be involved in the details of where the group visited, what stories were told and what lessons were imparted. He also said that the tour should focus on the men and not himself and mentioned veterans of the company that I should try to bring along. He then told me to come back up to Hershey as soon as I could, and we would get started.

And that is what I did. Each time I visited we would devote hours to one stop on the tour, or one day on the trip. Winters would explain to me in detail what had happened, why he had made the decisions he had and what the take-away of the stop should be. One of the things that became apparent very quickly is that I needed to arrive prepared, not only with maps, photos and any other materials that might be needed, but with a good background of what was going to be discussed and solid questions. He often asked me if I’d done my homework.

These visits went on for more than a year before the research for the basic itinerary was done. Winters had been involved in every step of the process; always willing to help in any way that he could, but expecting the entire Stephen Ambrose crew and me to pull our own weight. It was very much a collaborative process but I was the main beneficiary. I learned so much, not only about the history of what had happened, but even more importantly about planning, preparation and leadership.

Once the basic itinerary was done, it was time for a site inspection, the final step in the planning process. Here again, Winters had a hand in how the tour came together. Unable to make the trip himself, the tour staff brought along a cell phone, which in those days was about the size of a brick, and at each stop I, or someone from the office, would call him and describe in detail what we saw, where we were standing, etc. His recall of the locations where he had fought was incredible. It was largely through his recollections that we were able to trace the route he took to Brecourt on the morning of June 6, 1944, and later to find the spot of Easy’s river crossing at Hagenau during what Stephen Ambrose called, the “last patrol.”

Eventually, everything was ready, tickets were sold and the tour was going to happen. I was pretty familiar with all the stops, but this would be the first time I’d be responsible for showing a large group of people around by myself. I made one final trip to Hershey, where Winters told me that my nervousness was to be expected, but that I had done everything possible to make the tour a success and that he hoped everything would go well. As I left, he told me to return when the trip was finished and let him know how everything went. Then, as he always did when he parted, he reminded me to, “Hang Tough!”

That first tour was something I’ll never forget. I’ve never worked harder on another tour since. There were so many wonderful moments, and I particularly remember how special it was to have Bill Guarnere and Babe Heffron along. There have been almost twenty years of tours and memories since that first Band of Brothers® Tour but I will always remember the first one.

As promised, after I got home I returned to Hershey. As was customary, after lunch we headed up to Major Winters’ office. As I sat down he asked, “so how did everything go?” I answered that I thought everything had gone well.” I’ll never forget his response. His face broke out into a terrific smile and he said, “I know it went well. I had someone keep an eye on you.” Curious I asked what he meant and he said that he had reached out to one of the guests prior to the trip and had them call him every day to report on how the tour was going, what the group was seeing and, most importantly, what I was saying.

So why am I saying all of this now? It is because even after almost twenty years it is still the tour that I am proudest of helping to create and still, very much, the experience that Major Winters intended it to be. While we have improved the tour over the years, and tweaked things as we find out more, I think we have stayed very true to the original outline. It does not matter if you travel with Ron Drez, Erik Flint, or me on the Band of Brothers® Tour because each of us had a very personal and unique relationship with the men of Easy Company and each of us are still telling the story as Winters wanted it told.

Since then, many others have tried to create their own Band of Brothers® Tours but no other company or historian has had the input or endorsement of Major Winters. I’m very proud of the fact that my friend, Easy Company’s wartime commander, told someone who wondered which tour to take that, “This tour is special, there is nothing else like it.” Here is hoping we can all travel together again soon.