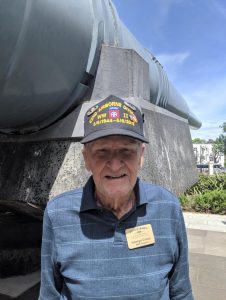 We are delighted to share the news that journalist Diane Covington Carter’s article in France Today online (June 9th, 2019), “Dispatch from Normandy: Honouring D-Day Veterans on the 75th anniversary,” won a Bronze award from the Society of American Travel Writers Western Chapter, in the category of Photo Illustrated article. D-Day veteran George Cross, a paratrooper with the 82nd Airborne who traveled with us for the 75th, appears in this piece.

Check out the award-winning photo essay Dispatch from Normandy>>

Diane Covington-Carter spent some time chatting with George at Utah Beach. She also included him in her wonderful article, “A chance to heal: Veterans return to Normandy 75 years later, honor the fallen at D-Day,” which appeared in The Union newspaper.

Read A Chance to Heal>>

George Cross joined the Army after an Army recruiter talked to his high school Class about being in the airborne division. He and a buddy, Donovan, joined together, but sadly, Donovan was murdered by his father before he could make it. George named his first son after him. George was only 17 years old when he joined the Army. His brother also joined, which was somewhat forbidden for two sons to both be in the service in harm’s way.

George served in the 82nd airborne division and began his service in the 456th Parachute Field Artillery, 456 PFA. He transferred before they jumped to the 505th Parachute Infantry Regiment, 505 PIR, because he was knowledgeable in glider training. He parachuted into Normandy 18 miles inside enemy lines on D-Day.

The men had “clickers” so that after they landed they could find each other. It was expected that the brush was only a couple feet high, but in reality the brush was much larger which caused many problems when they were landing. The parachutes that were used could not…