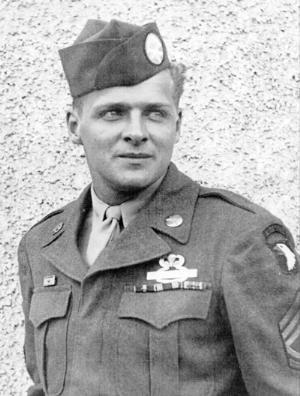 I was saddened to learn of the death of Don Malarkey, one of the last of the rapidly vanishing Band of Brothers. I first met Don on May 5, 1988 when I walked into the Company E reunion being held in the Monteleone Hotel in New Orleans. (Photo: Don Malarkey in 1945)

Steve Ambrose and I crashed their party, uninvited, in one of our earliest ventures to collect memoirs of D-Day veterans. That initial contact led to Steve’s Band of Brothers book in 1992. In 1994, and again in 2004, I was pleased to detail their voices and their exploits in my own Voices of D-day and Voices of Valor. And Stephen Spielberg’s film made them all legends.

Malarkey was an infantryman and mortar man, and during his D-Day battle, his daring, foolhardy race out onto the battlefield, to retrieve a German Luger souvenir was a memorable highlight in the Band of Brothers film. But my favorite memory of Don came much later. It was while standing on his battleground during the 50th Anniversary in 1994.

Dick Winters and Monsieur de Vallavielle (the owner of the farm) were talking about the battle at Brécourt while Don was examining the hedgerow where the German 105s had been dug-in. Monsieur de Vallavielle was commenting to Winters that despite the terrific fight in the field, his large manor house nearby had sustained little damage—except, that is, for a very large hole in the roof made by an errant mortar round.

With perfect timing, Dick Winters whirled around and shouted, “Malarkey! Come over here. Monsieur de Vallavielle wants to talk to you!”