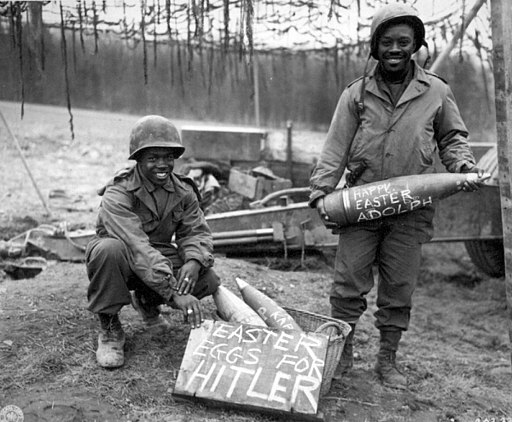 The two men in this photograph are Technical Sergeant William E. Thomas and Private First Class Joseph Jackson of the 333rd Field Artillery Battalion, but at the time of the photograph were part of the 969th Artillery Battalion. Scrawling such messages on artillery shells in World War II was one way in which artillery soldiers could humorously express their dislike of the enemy.

The 333rd Field Artillery Battalion suffered tremendous casualties in the early stages of the Battle of the Bulge in late 1944, being overrun on December 17. The survivors ended up in the 969th Artillery Battalion for the rest of the battle, where they provided vital fire support for the 101st Airborne Division during the siege of Bastogne…More at Rare Historical Photos>>

On Easter Sunday, April 9, 1944, as captured in a Signal Corps radio telephoto, Helmeted American soldiers knelt during Easter morning services on the Italian Front as Father Gregory R. Kennedy of Dubuque, Iowa, said Mass for these men, who had left the safety of their nearby foxholes to attend…More at WWII Museum digital archives>>

The Battle of Okinawa

The Battle of Okinawa was the last major battle of World War II, and one of the bloodiest. On April 1, 1945—Easter Sunday—the Navy’s Fifth Fleet and more than 180,000 U.S. Army and U.S. Marine Corps troops descended on the Pacific island of Okinawa for a final push towards Japan. The invasion was part of Operation Iceberg, a complex plan to invade and occupy the Ryukyu Islands, including Okinawa.airfields in proximity to Japan in preparation for the planned invasion.

By the time American troops landed on Okinawa, the war on the European front was nearing its end. Allied and Soviet troops had liberated much of Nazi-occupied Europe and were just weeks away from forcing Germany’s unconditional surrender.

On the Pacific front, however, American forces were still painstakingly conquering Japan’s Home Islands, one after another. After obliterating Japanese troops in the brutal Battle of Iwo Jima, they set their sights on the isolated island of Okinawa, their last stop before reaching Japan.

Okinawa’s 466 square miles of dense foliage, hills and trees made it the perfect location for the Japanese High Command’s last stand to protect their motherland. They knew if Okinawa fell, so would Japan. The Americans knew securing Okinawa’s airbases was critical to launching a successful Japanese invasion.

Landing on the Beachheads

As dawn arrived on April 1, morale was low among American troops as the Fifth Fleet launched the largest bombardment ever to support a troop landing to soften Japanese defenses.

Soldiers and Army brass alike expected the beach landings to be a massacre worse than D-Day. But the Fifth Fleet’s offensive onslaught was almost pointless and landing troops could have literally swum to shore—surprisingly, the expected mass of awaiting Japanese troops wasn’t there…More at History.com>>