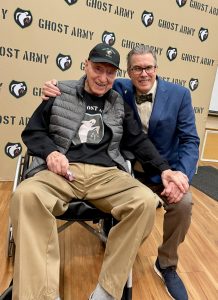 The Ghost Army used inflatable tanks, sound effects, and imagination to fool the Germans on the battlefields of Europe. The unsung heroes of the 23rd Headquarters Special Troops and the 3133rd Signal Company Special saved thousands of lives and helped win the war, but their efforts were kept secret for fifty years.

On February 1, 2022, President Biden signed the bill to award the Congressional Gold Medal to the Ghost Army. We could not be prouder of Rick Beyer, the historian for our Ghost Army of WWII Tour, who worked tirelessly for seven years as the President of the Ghost Army Legacy Foundation to make sure these extraordinary WWII units received this long overdue honor.

Exciting news! There are several opportunities to learn more about the Ghost Army and to honor the veterans in the upcoming months.

A Ghost Army exhibit that was originally created by the National WWII Museum in New Orleans, Louisiana, is on the move. Rick, who produced and directed the award-winning PBS documentary The Ghost Army and co-wrote the book, The Ghost Army of World War II, worked with the museum to create this exhibit. It’s outstanding!

The Ghost Army Exhibit opened on June 16 at the Illinois Holocaust Museum in Skokie, Illinois, just outside Chicago. More than 150 people attended the event, including Ghost Army veteran Bernie Bluestein, who took part in a lively Q&A with the audience. He was a big hit!

The exhibition details the 22 large-scale deceptions launched by the “Ghost Army” from Normandy to the Rhine River between D-Day and the end of the war. Featured artifacts include artwork, uniforms, and inflatable tanks and planes, as well as text panels detailing unit operations, profiles of unit officers, archival photography, and sketches from unit officers that educate visitors on these unlikely heroes.

After this, the exhibit moves to the Nevada Museum of Art in Reno, Nevada.

Rick expects to hold the last two celebrations in September.

Join Rick on our Ghost Army of WWII Tour to learn more about these remarkable men. You will begin in England, where the top secret unit trained, before traveling on to Normandy, Brittany, Belgium and Luxembourg to study the key deception operations that were a pivotal part of the Allied victory.

Travel with Rick on The Ghost Army Tour >