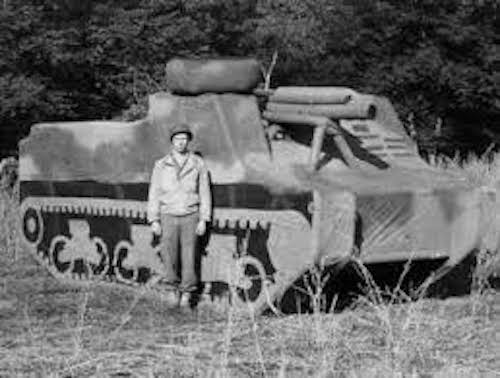 During World War II, United States Army planners (inspired by British deception efforts) set out to create a top-secret unit capable of conning the Germans on the battlefields of Europe. The 23rd Headquarters Special Troops, aka The Ghost Army, used illusion and trickery to impersonate actual fighting units on or near the front, in order to fool the Germans about the size and location of those units. Over the course of 21 different operations they are believed to have saved thousands of lives, and were never discovered by the Germans. Our historian for the Ghost Army of WWII Tour, Rick Beyer, and Elizabeth Sayles, authors of The Ghost Army of World War II, reveal eight items large and small that The Ghost Army used to pull the wool over the Germans.

The Ghost Army employed hundreds of inflatable tanks, trucks, artillery pieces, jeeps, and other vehicles. These could be set up overnight so that from the air it looked if American units had moved in. Attention to detail was critical: they used a bulldozer to create phony tracks leading up to every dummy tank. Great care had to be taken to make sure no civilians got too close. On one occasion, two Frenchmen on bicycles somehow got through security, where they spied what looked like four GI’s lifting a 40-ton Sherman Tank. As Shilstone tried to shoo them away, he offered the first explanation that came into his heads: “The Americans are very strong.”

To draw fire away from American artillery batteries, the Ghost Army would set up dummy installations with inflatable artillery pieces a quarter to half mile away.  At night they would use improvised flash canisters to mimic the firing of the artillery. These consisted of artillery shell casings filled with black powder and set off with an electrical igniter. Telephone lines were run between the real artillery and the Ghost Army’s phony batteries to synchronize the real firing with the phony flashes.

Sound engineers captured the sounds of tanks, trucks, bulldozers, even the assembly of pontoon bridges used to ford rivers. “You could hear ’em hammering away and swearing,” marveled Private Harold Flinn. These were recorded onto 16” glass transcription disks, like the ones used to make hit records. Different sound effects could be mixed together to create specific scenarios, and then played from powerful speakers mounted on armored vehicles to simulate the sounds of units moving and operating at night. With a range of more than ten miles, they not only fooled the Germans, but also frequently fooled American units located nearby!

During World War II, most critical radio messages were telegraphed in Morse code. German intelligence was so sophisticated that they could recognize the style, or “fist”, of individual radio operators n American units. So Ghost Army radio operators had to become mimics. They learned to copy the precise techniques of the operators they were imitating, so that as the real radio networks went off the air and the fake ones took over, nobody would know. To this day some experts claim that copying another operator’s fist is almost impossible. The fact is, however, that the Twenty-Third’s high-speed telegraphers did it routinely.

Part of The Ghost Army’s job was to put on a show for any German spies left behind in the towns where they were carrying out their deceptions. This was called “special effects.” If, for example, they were pretending to be the 75thArmored division moving into the line, they would carefully paint 75th markings on all their vehicles and drive them back and forth through town. Each canvas-covered truck would have two men in the back to make it seem like it was full of soldiers. Trucks could then be repainted with slightly different markings, and driven through town again.

Another special effects ploy involved wearing the patches of the unit they were impersonating, and then interacting with civilians in local towns. In some cases the men would layer the phony patches on their uniforms, with the largest on top and the smallest underneath, so they could impersonate multiple units. They would go into a town and raise hell at a local bar. Then they would rip off the top patches, and move on to the next bar. Corporal Jack Masey recalled that his shirts were wrecked because he sewed so many different patches on them.

For the sake of realism, The Ghost Army set up phony headquarters for each unit they imitated. And of course a counterfeit HQ has to have a counterfeit general to go along with it. So even though it was expressly prohibited by U.S. Army regulations, junior officers pinned on general’s stars and impersonated high-ranking brass. As one Ghost Army officer put it: “You can’t portray a woman if bosoms are forbidden.” In one notable deception, a phony general accompanied by a jeep full of armed guards conducted an inspection tour up and down the front. His biggest worry was that he would run into a real general and the jig would be up!

The men embraced their deceptions with enthusiasm. “We’d find out if a division or a special unit had a particular song that they liked to sing,” remembered Lt. Dick Syracuse.  Armed with this information, they would head into a nearby town and hit a bar or café. “We’d get blitzed and then sing their song!”

Rick Beyer and Elizabeth Sayles are the authors of The Ghost Army of World War II: How One Top-Secret Unit Deceived the Enemy with Inflatable Tanks, Sound Effects, and Other Audacious Fakery.  More on the book and the unit at http://www.ghostarmy.org.

Travel with Rick on the Ghost Army of WWII Secret War Tour!

The Ghost Army of WWII Secret War Tour follows along the path of the 23rd Headquarters Special Troops, the extraordinary deception soldiers better known as the Ghost Army. This tour focuses not only on the planning and invasion of Normandy, but also the contributions made by this top secret U.S. Army unit.

On this tour, you will have the opportunity to be part in an extraordinary event. We will be dedicating a Ghost Army historical marker in Bettembourg, Luxembourg on the EXACT spot where the 23rd Headquarters Special Troops impersonated the 6th Armored during Operation Bettembourg in September 1944. We expect the American ambassador, reenactors, and other officials to join us as we honor these heroes.

Get the details on the tour>>