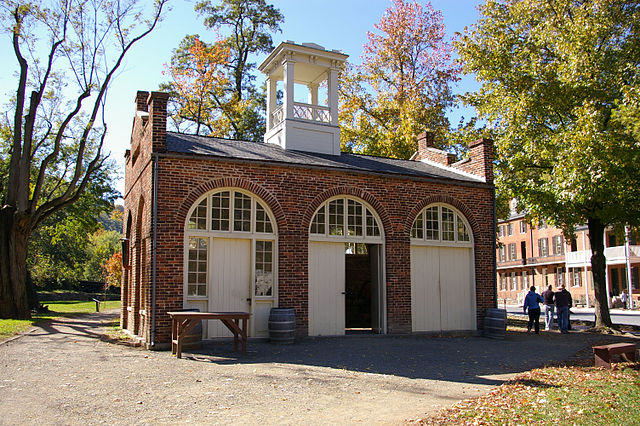 Historian Mark Bielski covers the significance of Harpers Ferry, West Virginia, in Civil War history, a charming town that is one of the stops on our Civil War: This Hallowed Ground Tour.

Certainly our time in Manassas, Antietam, Gettysburg and Appomattox are essential for anyone who wants to study the beginning, end and the carnage in between that defined this tragic and tumultuous period in American history. At the same time, each place we visit offers charms and cultural riches unique to this region of the United States. With this in mind, I’d like to share some of the history of one of the less renowned stops on our tour, Harpers Ferry, West Virginia. 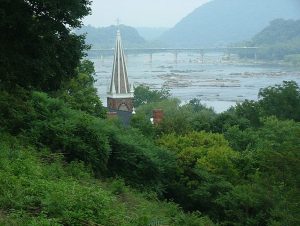 Our visit is for historic purposes and to study the events that occurred there, yet we also travel there to take in the aesthetic beauty. This is partly on the advice of Thomas Jefferson, the brilliant one-time occupant of the White House, who declared that the view from the rocks that now bear his name to be “one of the most stupendous scenes in Nature.” Photo: View of Harpers Ferry from Jefferson Rock

We walk up a series of stairs and a path hewn out of the mountain granite to Jefferson Rock, part of which includes the Appalachian Trail. Once at the summit, we regard the confluence of the Potomac and Shenandoah Rivers, and the spectacular vista that Jefferson prized as “worth a voyage across the Atlantic.”  In the lower town are many historic buildings, shops and museums along Shenandoah, Potomac and High Streets.

We get an overview and watch a video depicting local history before moving forward to the Civil War era to see where John Brown’s raid took place in 1859. The fiery abolitionist was one of America’s most controversial figures. His violent attempt to start a slave revolt here made him reviled by some and admired by others. This event enflamed the divisiveness in the country that grew even more intense from the time of Brown’s capture at the armory by U.S. Marines led by Robert E. Lee, to his execution just steps away.

In 1861, the Confederates had taken the Harpers Ferry arsenal and its munitions, moved the machinery to Richmond and left anything they could not use. They cut the railroad and burned the bridges. Most of the residents fled and only a small remnant of civilians stayed behind. The town still had strategic significance because of the railroad, the Chesapeake & Ohio canal and the rivers that formed a transportation corridor there. Union troops moved in and established a supply depot and a 14,000-man garrison.

In September 1862, after the Confederate victories at Second Manassas and Winchester, Confederate General Robert E. Lee decided the time was right to go on the offensive and take his army north, score a decisive victory and threaten Washington and Harrisburg, the capital of Pennsylvania. He also hoped to attract many recruits in Maryland and provision his army.

As the Confederate host crossed the Potomac and advanced into Maryland, the large contingent of Union troops at Harpers Ferry was a potential danger to its rear. In a prelude to what would become the great battle of Antietam, Lee divided his army of 50,000 into three parts and charged General Thomas Jonathan “Stonewall” Jackson with the task of nullifying this threat. Jackson moved on Harpers Ferry with 11,000 men. He first took possession of the heights surrounding the town. Jackson had his forces advance in a three-pronged attack. His basic plan was to gain the advantage of the high ground, encircle the town and put the defenders in an untenable position. 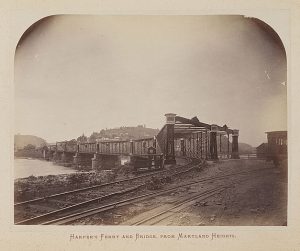 Maryland Heights was the highest mountain overlooking the town and one of the key Confederate objectives. In a crucial tactical move, General Lafayette McLaws drove the more than 4,000 blue-clad defenders off the ridge, positioned his artillery and opened fire on the Union-fortified positions on the outskirts and in streets below. Jackson had another wing do the same from Bolivar Heights, while he converged on the town with a third column from the rear.  In doing so, he trapped the remaining Federal garrison of 12,500 troops and forced their surrender in what became the largest capitulation of Union forces in the Civil War. Photo: Harpers Ferry and Bridge from Maryland Heights

After exploring the lower part of Harpers Ferry, we ascend Bolivar Heights. Here you can walk beside trenches, study the Civil War cannons placed as if the battle was yesterday, and enjoy an incredible vista where you can see most of the park areas from one vantage point.  We have a much more tranquil setting and scenic view of the historic little town while we take in the story of what occurred there.

Travel on the Civil War: This Hallowed Ground Tour

“We couldn’t have done it by ourselves. Everything is perfectly planned. All you have to do is go and the days are always filled with great sites and amazing information.” – Teresa Holmes Taylor

Our Civil War: This Hallowed Ground Tour gives you a panorama of the major events that began and ended the Civil War, starting with First Manassas, culminating with Gettysburg and breathing the air of finality at Appomattox.

Learn from, and be inspired by, the skill, the courage, and the endurance displayed by the generation that brought us through the Civil War. In addition to retracing battles we include education sessions to enhance our understanding of the war and people.

Travel on the This Hallowed Ground Tour>>