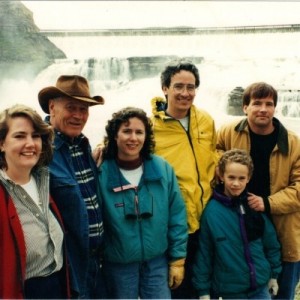 On Friday, January 30, HBO announced plans for a miniseries, Lewis & Clark, which like the network’s acclaimed miniseries, Band of Brothers will be based on a best-selling book by Stephen E. Ambrose. Executive producers Tom Hanks, Brad Pitt and Edward Norton are using Dr. Ambrose’s book, Undaunted Courage: Meriwether Lewis, Thomas Jefferson, and the Opening of the American West, as source material for the project.

While no airdate has been set, fans of the book, who don’t want to wait for the miniseries to experience the explorers’ historic journey, can travel this summer with Stephen Ambrose Historical Tours on the Lewis & Clark Undaunted Courage Tour.

“My dad decided that our family would celebrate the U.S. Bicentennial by retracing the Lewis and Clark expedition,” says Dr. Ambrose’s son, Andy Ambrose. “We started in Kentucky like Lewis and Clark and did the entire route to the Pacific. Around the campfire, dad would read from original first volumes of their journals. He had invited his classes from the University of New Orleans to join us along any part. And when we got to Lemhi Pass on the Continental Divide, which was a major disappointment for the explorers because they found endless more mountains to cross instead of a river, it was exciting for the family because there were 20 students waiting.”

Through its Lewis & Clark Undaunted Courage Tour, Stephen Ambrose Historical Tours carries on Dr. Ambrose’s legacy by continuing to preserve and expand his carefully conceived and executed historical itinerary. Like Dr. Ambrose, who did a portion of the journey every summer, the company offers this tour every summer. This year, the tour is June 17-28 and begins in Great Falls, Montana, following their path through Idaho, Washington and Oregon, finishing on the Pacific Coast.

“People who join us learn about sites like the Missouri River breaks, a very scenic part of the river with white cliffs called the scenes of enchantment by Meriwether,” says Andy Ambrose. “We go to their campsites, and like my dad, we read from the expedition journals on the very places where the explorers made their entries.”

Amenities on the Lewis & Clark Undaunted Courage Tour are luxurious in comparison to the original expedition. Guests travel by air-conditioned motor coach and enjoy staying in comfortable hotels and outstanding meals with the full-time historian, Hal Stearns, an historian-storyteller-educator, who served on the Nebraska and Montana Lewis and Clark Commissions and the National Lewis and Clark Trail Heritage Foundation Board. People seeking a taste of how Lewis and Clark traveled can book the three-day camping and canoeing pre-tour.