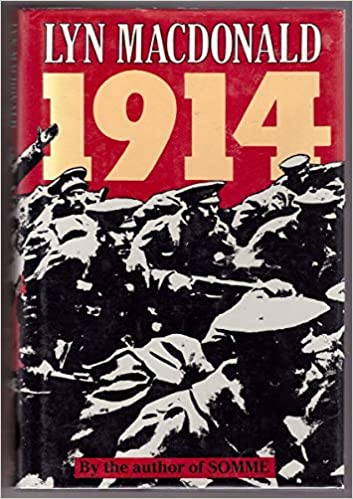 Senior Historian Chris Anderson leads our WWI: War to End All Wars Tour. Chris has spent considerable time researching and studying the First World War. After college, he moved to the UK for a year to interview British veterans of the Great War. Later as assistant curator at the Historical Society of the Militia and National Guard, he was able to interview many surviving American Doughboys.

Chris often gets asked by guests about what books to read before going on the WWI tour. Following, is an informal list he updates as he reads new books.

The literature of the Great War is truly vast so I make no claim to thoroughness here. These are just some books I have found helpful/interesting. The titles are placed in loose categories.

I should also mention that if you are very interested in the topic you would be well served to join the Western Front Association. The newsletters they put out are fantastic and they do a number of conferences in the U.S. and Great Britain. They also have a great many local chapters that meet regularly. Sort of the WWI version of the Civil War roundtables.

First World War by John Keegan – My “go to” one volume history of the war by one of my favorite historians. His chapter on the Somme in Faces of Battle is also outstanding.

The Guns of August by Barbara Tuchman – Still the standard work on the disasters that led to the outbreak of the war.

A Military Atlas of the First World War – I like maps!

Attrition by William Philpott – The author makes a very convincing case that the method of fighting the war—and the subsequent losses—were a necessary part of winning the victory.

The Vanquished by Robert Gerwath – Interesting account of the post war world for the men who participated.

A Perfidious Distortion of History by Jurgen Tampke – Very interesting book by a German historian that refutes the argument that the Versailles Treaty was unjust or that it caused WWII.

Fight to the Finish by Allen Mallinson – Another good general history of the war. He interestingly tells the story month by month. There is one chapter for all 52 months, which I think is effective.

Too Important For the Generals by Allen Mallinson – Author takes the generals to task for failing to overcome the problems of trench warfare, but also discusses the often overlooked role that civilian politicians played in not doing a better job of directing the military men.

Mud, Blood and Poppycock by Gordan Corigan – Very interesting series of essays in which a former British Army officer takes a fresh look at some of the often told stories of the war. He takes on the Lost Generation myth, Military incompetence and the role of the Americans for example.

Unending Vigil – A wonderful history of one of the organizations I most admire—the Commonwealth War Graves Commission.

ANYTHING by Lyn MacDonald – MacDonald wrote a number of oral history collections of specific British/Commonwealth battles and Great War related topics. They are all superb and set the standard for all of the books of this sort to follow.

Men Who March Away – A collection of Great War poetry that I really enjoy.

Storm of Steel by Ernst Jünger – In my opinion the best, and most authentic, first person account of a German soldier.

Somme Mud by E.P.F. Lynch – Fairly recent book by Australian soldier. There is also a companion volume written by Lynch’s editor that follows in Lynch’s footsteps.

Undertones of War by Edmund Blunden – Another account by a British officer I enjoy.

Under Fire by Henri Barbusse – Can be a bit difficult at times, but as I don’t read French it is one of the few French first person books I’m aware of.

Armies and Soldiers in WWI

Anzacs on the Western Front by Peter Pederson

They Shall Not Pass: The French Army on the Western Front by Ian Sumner

American Armies and Battlefields in Europe – THE book on the history of the AEF in WWI. Also, the maps can not be beat.

Instrument of War by Dennis Showalter – Good one volume account of the war from the German army perspective.

Death’s Men: Soldiers of the Great War by Denis Winter – I think the best social history of life for the common soldier during WWI.

The Doughboys: The Story of the AEF, 1917-1918 by Laurence Stallings – Another great history of the Americans in WWI.

Betrayal at Little Gibraltar by William Walker – History of the American attack on Mont Facon.

The Price of Glory: Verdun 1916 by Alistair Horne – Still THE history of the battle of Verdun.

Verdun 1916 by William F. Buckingham – New history of the battle that makes some interesting arguments.

The Kaiser’s Battle by Martin Middlebrook – Good account of the German spring 1918 offensive. Most of the coverage, however, is on the fighting along the British sector.

First Day of the Somme by Martin Middlebrook – Remains my favorite book about July 1st, 1916.

With their Bare Hands by Gene Fox – Another account of the Division at Montfacon.

Passchendaele: The Lost Victory of World War I by Nick Lloyd – Best recent account of the advance from Ypres I know of.

Cheerful Sacrifice: The Battle of Arras 1917 by Jonathan Nichols – Only decent account of Arras I know of.

The World Remade: America in World War I by G.J. Meyer – WWI and the American experience.

My Fellow Soldiers: General John Pershing and the Americans Who Helped Win the Great War by Andrew Carroll – Account of Pershing’s relationship with his Army.

Pershing’s Soldiers by Richard Faulkner – Thorough history of the U.S. Army in WWI.