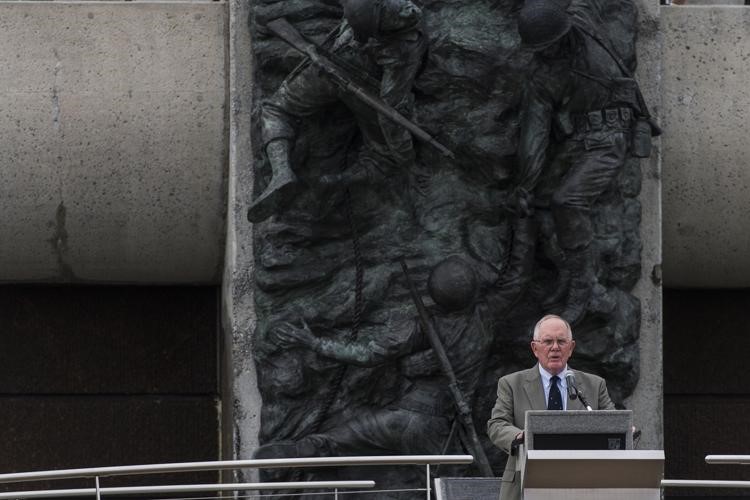 We are honored to share this article published in The News & Advance in Lynchburg, Virginia about the annual gathering on Memorial Day at the National D-Day Memorial, which is located in the small town of Bedford, Virginia. Our historian John (Jack) W. Mountcastle, BG, USA (Retired) was the keynote speaker this year. More than 1,500 people attended. (All photos credited to Shannon Keith, The News & Advance, Lynchburg, VA.)

As Jack said in his speech, “It is amazing that here at the foot of the Blue Ridge Mountains we feel such an extraordinary linkage to Normandy. It’s an honor to be here today as we pause to pay tribute to our fallen, including those that looked death in the eye on the beaches of Normandy.”

Roanoke, Virginia TV station, WDBJ7, also sent their news team to cover the event. You can watch a video of the ceremonies, “Veterans remembered at Bedford D-Day Memorial,” below.

Brent Johnson and his 4-year-old son Landon drove from their home in Richmond to the National D-Day Memorial in Bedford on Monday. Johnson said he made the trip in order to teach his son “a valuable lesson.”

“I want him to always be grateful for the sacrifices others have made,” Johnson said. “He needs to remember that freedom doesn’t come cheap.”

Johnson and his son were among the hundreds of people that came to Bedford on Monday to honor the men and women who died while serving in the nation’s armed forces.

“We come here together on this Memorial Day to honor those that gave their all,” said John Long, director of education with the National D-Day Memorial Foundation.

“We express today our gratitude for the men and women — who in defense of our great nation — made the ultimate sacrifice.”

April Cheek-Messier, president of the National D-Day Memorial Foundation, said she was pleased Monday’s event was attended by so many people.

“We have a duty to remember their sacrifice,” Cheek-Messier said. “Let us always remember those that died so we could all be here today.” 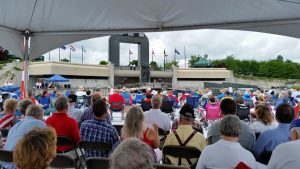 “It is so wonderful to see so many people here today to pay their respects to our fallen,” Mountcastle said during the ceremony. “And it is wonderful to know that people across our nation, in small towns and big cities, are doing the same today.”

Mountcastle — a native of Richmond — is a 1965 graduate of the Virginia Military Institute and became an officer in the United States Army in 1966. Mountcastle earned his master’s and doctorate degrees from Duke University and taught military history at the United States Military Academy at West Point and later served as the Army Chief of Military History in Washington. Mountcastle retired from the Army in 1998 and teaches Civil War history courses at the University of Richmond.

Mountcastle — who has led multiple tours of World War 2 battlefields, including D-Day landing sites in Normandy, France — said he was impressed with the memorial in Bedford.

“It is amazing that here at the foot of the Blue Ridge Mountains we feel such an extraordinary linkage to Normandy,” Mountcastle said. “It’s an honor to be here today as we pause to pay tribute to our fallen, including those that looked death in the eye on the beaches of Normandy.”

Read the entire article and see photos of the ceremonies>>

Watch coverage of the ceremonies at WDBJ7>>

Stephen Ambrose Historical Tours has several tours that will take you to the hallowed ground of D-Day, the beaches of Normandy.

D-Day to the Rhine Tour>>

75th Anniversary of D-Day: D-Day to the Rhine>>

75th Anniversary of D-Day: Churchill’s London to Battle of the Bulge Tour>>