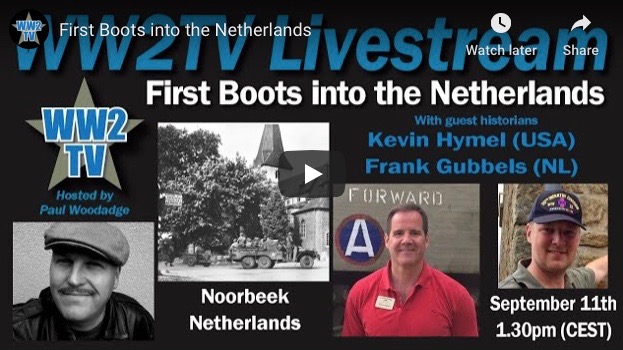 On the 76th anniversary of the start of Operation Market Garden, we’d like to share a video that Historian Kevin Hymel recently appeared in on WW2TV, “First Boots into the Netherlands.”

A week before Operation Market Garden, the American 30th Division fought for the Dutch town of Noorbeek. It then became the first part of the Netherlands liberated. In “First Boots into the Netherlands,” Kevin discusses the Rhine Rat Race battles with local historian and battlefield guide Frank Gubbels, who is on the ground the Netherlands for this historic occasion.

As historian Paul Woodadge noted when talking about his inspiration for creating the WW2TV Channel after 25 years of leading WWII tours, “I watched an award-winning film about a battle in Normandy recently. It was good, but not one second of footage was shot at the actual battlefield. It was talking heads and BW footage only. I want to change that, I want to take you INTO the battlefields in glorious HD.”

His mission is simple: “I would like to take people across, through, and inside the battlefields like never before. An immersion into the beaches, fields, hedgerows, hills, and forests that will almost allow you to feel as if you were there yourself and fighting alongside the men and women who liberated Europe. I will be pairing with fellow tour guides, authors, and historians, and drawing on my own more than 25 years of traveling and touring WWII sites.”

To learn more about Woodadge’s motivation for creating WW2TV, read the article “Paul Woodadge: Filming the Battlefields of WWII,” which appeared on War History Online.

The actual video content is hosted on the WW2TV Youtube Channel, but links will be available on Woodadge’s WW2TV website. Battlefield Studies will be the most common type of film available. They will vary in length from 5 minutes up to about 20 or 25 minutes. Future videos will include documentaries, live streaming of WW2 events, and interviews with historians and authors.