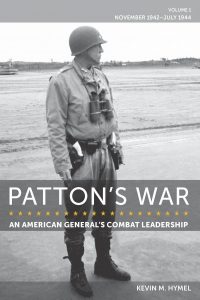 Kevin Hymel, the historian for our In Patton’s Footsteps Tour, will be giving at presentation on General George S. Patton at the Eisenhower Presidential Library in Abilene, Kansas, on Thursday, November 17. The program, which will focus on Patton’s combat leadership in Morocco, will be held at 12pm Central Time in the library building courtyard. A box lunch will be served on a first come, first served basis.

Kevin is the author of Patton’s War: An American General’s Combat Leadership, Volume I, November 1942 -July 1944. The book covers Patton’s career from Operation Torch when he assaulted the beaches of Morocco, through to the North African campaign, the battle for Sicily, and the rest of Patton’s time in Sicily, England, and France, right up to the night before his Third Army became operational on the continent.

The Eisenhower Presidential Library offers the monthly Lunch & Learn event the 4th Thursday of every month at 12pm Central Time. This year’s theme is Dwight D. Eisenhower: The Making of a Leader.

Kevin has served as a historian at the U.S. Army Combat Studies Institute at Ft. Leavenworth, Kansas. He was also the Research Director for WWII History and Military Heritage magazines and has written numerous articles for each.

Kevin has been a popular historian with Stephen Ambrose Historical Tours for more than 15 years, and has appeared in numerous documentaries on the History Channel and American Heroes Channel. He received his Bachelor’s Degree from LaSalle University and Master’s Degree from Villanova University, both in History.