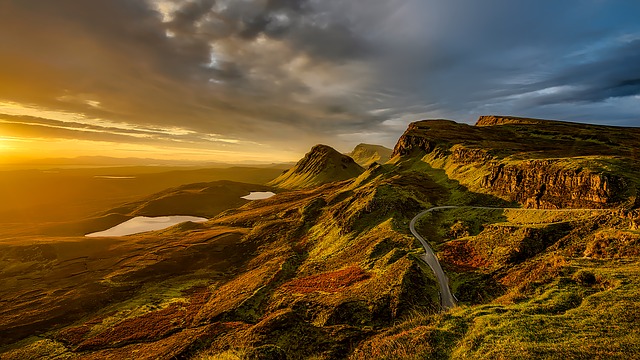 Season four of the hit Starz show Outlander just wrapped. The historical time travel drama has been credited, in part, for the fourth consecutive year of increased tourism in Scotland, as fans visit the Highlands to see the mythical Craigh na Dun stones and Lallybroch’s real-life counterpart, Midhope Castle as well as other spots where the series has been filmed.

If you’re interested in doing some historical time travel in Scotland, we’d highly recommend you join our historian Chris Anderson August 8 – 19, 2019 on the Scotland: Jacobite Rising of 1745 Tour.

As Outlander shows, Scotland’s Northern Highlands are a place of mysterious beauty. Scottish descendants will find a welcoming homeland, and all travelers will find a unique and inspirational history. As you’ll learn from our tour, the Highlands have not always been so inviting. In the wake of its defeat by the British army in the Jacobite Rebellion of 1745, Northern Scotland was left with its lands ravaged and its population either annihilated or exiled.

The seeds of the Rebellion (also known as The ‘45) were sown in 1603, with England’s first Stuart king, James I, at the time King James VI of Scotland. In 1688 his Catholic grandson, King James III, was deposed and fled to France. Nevertheless, the Stuarts held the throne until 1714, when the House of Hanover assumed the crown.

By 1745, Prince Charles Edward—Bonnie Prince Charlie—was the third generation of Stuarts in exile. Counting on help from France and from Stuart loyalists—the Jacobites—Charles entered Scotland in July of 1745, with the aim of winning back the crown for his father.

Jacobites earned surprising victories at Falkirk and Prestonpans, and, though seriously outnumbered, held off the British at Fort William and other sites. Their luck ran out at Culloden, where they were slaughtered in a savage fight.

We’ll see the battlefields, castles, forts and fields where the Jacobites fought well and made their last stand. Our tour will also include some of the Outlander filming locations—sites where Claire travels back in time to rejoin Jamie during the period of Scottish history covered by our tour.

Learn more about the Scotland: Jacobite Rising of 1745 Tour>>

What Guests Are Saying About the Scotland Tour

“This was my third tour with SA, second with Chris as Historian. Absolutely the best! Chris brought so much information to the table. He wove the story of Prince Charles into the fabric of the United States. Clair was just awesome. My wife joined me on this tour and enjoyed it very much. We cannot recommend it more highly.” – Lynn Hargrove

“This was my first time going on a Stephen Ambrose tour and I must say that this particular tour was absolutely remarkable!!! Historian Chris Anderson was amazing with all of the facts that he gave us. We visited places I never dreamed of seeing and the food….what can I say about that other than it was fantastic. Claire did an awesome job with our hotels and the food and keeping us all together…just like a mom!!! I would definitely take this tour again…well worth the money!!! Thank you Chris and Claire and everyone else involved!!!” Gail