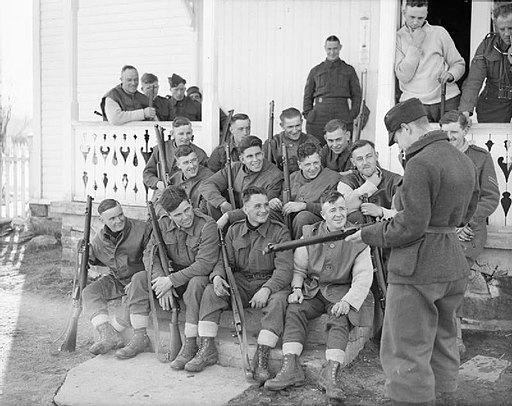 “April is the cruelest month” according to T.S. Eliot, but was he also thinking historically? You decide if these events qualify.

Here are a few of note that happened during World War II and the American Civil War.

19 April – Lofoten Islands, Norway. Three convoys departed Scotland, from the mainland and Scapa Flow: destination Norway. British and French forces were planning to take control of Norwegian ports but in a seemingly uncoordinated effort, the army and navy command staffs travelled separately. With a disjointed embarkation schedule, units did not know the whereabouts of the artillery nor munitions in many cases. While some of the transports tarried off the coast, hesitant to make an amphibious assault, German Stukas dived and strafed. Once on shore, the Allies would face the German 169th crack mountain division. With the exception of the French Chasseurs Alpins, none of the other units had trained for mountain fighting.

(Above photo: British soldiers of the 4th Lincolnshire Regiment at Skage after marching 90 km (56 mi) across the mountains to escape being cut off, April 1940. A Norwegian soldier is seen examining one of their rifles.)

3 April – Rashid Ali al-Gaylani took over the government of Iraq in a coup backed by Nazi Germany. He deposed the British backed monarchical administration of six-year old King Faisal II. Gaylani refused to allow any Allied transports through his country. Baghdad became an HQ for Nazi intelligence operations in the Middle East.

1 April – Murmansk, USSR- Convoy PQ-13 reached its destination with munitions and war supplies for the Soviet Union. The convoy began with 19 merchant ships, and reached the harbor after losing five vessels. German U-boats destroyed two, the Luftwaffe accounted for another two sinkings and a destroy took out the fifth. A violent storm had separated the convoy from its destroyer escort and German scout planes located the ships and called in the attack. The convoy departed northern Scotland before stopping in Iceland on the voyage through the Arctic Sea. This was the first Arctic convoy to reach Murmansk, the world’s largest city north of the Arctic Circle. Because of the Gulf Stream currents, the harbor in Murmansk remains ice-free for a good part of the year.

11-14 April – Charleston, SC -Thursday to Sunday. A South Carolina delegation of three men delivered a demand for surrender to Major Robert Anderson at Fort Sumter in Charleston Harbor. The message was from Confederate General P.G.T. Beauregard and stated that they intended to take “possession of a fortification commanding the entrance of one of their harbors . . . necessary to its defense and security.” They let Anderson know that they would not fire upon his position if he advised them of the time of the evacuation of the Union troops stationed there.

Anderson replied that he also would not fire except in response., but that he would evacuate on 15 April if he did not receive supplies coming from the Federal government. The Confederates were aware that a supply ship was en route and deemed the answer unsatisfactory. At 0430 on Friday a signal shot opened a barrage from the other batteries in rotation. Anderson had a garrison of 85 officers and men as well as over forty laborers who worked in the fort. They began to return fire at 0700.

On Saturday, after thirty-four hours of bombardment, a rash of fires and destruction, and some minor injuries, Fort Sumter capitulated. The formal surrender ceremony occurred on Sunday at which time was the only fatality. When the colors changed and the fifty-gun salute concluded, there was an accidental explosion in a pile of ammunition that killed a Union private and injured several others.

Major Anderson, a Kentuckian, remarked that “Our Southern brethren have done grievously wrong. . . . They must be punished and brought back, but this necessity breaks my heart.”

South Carolina Governor Francis W. Pickens addressed a crowd, “We have met them and we have conquered.”

4-5 April – Union General George B. McClellan had moved most of his massive army of 120,000 men plus horses, mules, artillery, wagons and supplies from Alexandria, VA down the Potomac River and Chesapeake Bay to land at Fort Monroe at the tip of the Virginia Peninsula. His aim was to march his horde northwest and take Richmond. His first obstacle was Yorktown, where his army attacked 15,000 Confederates under General John Bankhead Magruder. General Joseph E. Johnston, in command of the Confederate Army in Virginia was sending reinforcements while McClellan’s men prepared to conduct a siege. After a minor battle, the Confederates withdrew toward Williamsburg.

6-7 April – Battle of Shiloh. In southwest Tennessee, General Ulysses S. Grant had brought his army to Pittsburg Landing on the Tennessee River. At the same time, General Albert Sidney Johnston was leading his Confederate force northward from Mississippi. Johnston would suffer a mortal wound that caused him to bleed to death in minutes on the first day of battle. Beauregard, who just a year earlier had been in command on the war’s opening day at Fort Sumter, took the reins. On the first day, he pushed the Union forces back nearly two miles. By nightfall, Gen. Grant’s camp was almost back at the landing at the Tennessee River—an important position to retain. That night reinforcements arrived and Grant launched a counterattack. The fighting raged for six hours until Beauregard decided to withdraw. The Federals did not pursue and the Confederates returned to Corinth, Mississippi.

20 April – President Abraham Lincoln announced that the western counties of Virginia were forming their own state. When Virginia voted for secession, the bulk of the western “mountain” counties had not supported the move. The new state of West Virginia was going to join the Union on 20 June 1863.

13-28 April – The Civil War left few places untouched from violence and suffering. Fighting often occurred in obscure places that did not make the major newspapers. Copperheads in Illinois attacked Federal soldiers who were on leave in a small town near the Mississippi River and seemingly far from the action. Skirmishing took place in Camden and Princeton, Arkansas, Troublesome Creek, Kentucky and even Big Bend of Eel Creek, California.