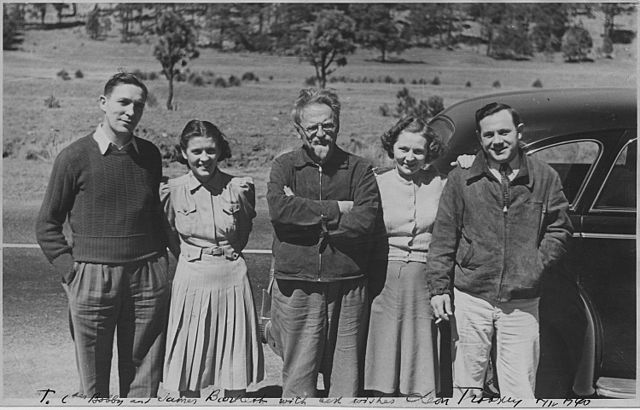 It is in the spirit of our founder, Stephen E. Ambrose, that director and historian Mark Bielski shares some of the interesting historical events that occurred during WWII and the Civil War in the month of August.

21 AUGUST Josef Stalin’s agents located his political rival, Leon Trotsky, in Mexico and murdered him with an ice-axe. Trotsky had been a leader in the Russian Revolution and had worked closely with Vladimir Lenin in the Marxist movement, the early formation of the Communist Party and a member of the first Soviet Politburo. In the power struggle that ensued after Lenin’s death, Trotsky became a marked man as Stalin rose to prominence and could brook no opposition. His elimination under Stalin’s principles of leadership was inevitable. Trotsky’s assassin, a Spanish-born communist and NKVD agent, later received the Order of Lenin.

18 AUGUST “The Fighting Rats of Tobruk” as the besieged Australian garrison in this North African seaport became known, continued to resist the assaults from Rommel’s artillery and the Luftwaffe bombings. After three weeks, Polish, British South African and Indian troops broke through the German lines with much needed supplies and reinforcements.

13-15 AUGUST The pivotal battle on the Eastern Front of WWII was about to begin.  General Friedrich Paulus and his German Sixth Army had pushed the Red Army to within 80 km of the outskirts of Stalingrad.  This large industrial city (now Volgograd) named for the dictator of the USSR was both a prize target for Hitler and the Third Reich as well as a “defend to the death” batttleground for Stalin.  More than a million Germans with their Italian, Hungarian and Romanian allies hurled themselves against an equal number of Soviet defenders.  One of the most fierce battles in the 20th Century would rage until February 1943 German surrender.

30 JUNE Major General John Frémont, the “Pathfinder,” put martial law into force in St. Louis, Missouri. Southern sympathizers and Missouri Secessionists had reacted and stirred up unrest in the city. They especially became incensed when they learned that Federal troops with a large contingent of German immigrants were called on to quell the disorder.

17 AUGUST While the Civil War raged, the Sioux Uprising occurred in Minnesota. With poor health conditions and near starvation on their reservations, the Sioux staged a revolt and attacked several white settlements. In September, President Abraham Lincoln sent General John Pope (fresh from his defeat at Second Manassas in Virginia) to quell the insurrection. After two months of fighting, the Federal troops captured nearly 1000 Sioux warriors and later executed 38 by hanging in December of that year.

21 AUGUST The infamous William Quantrill lead nearly 500 Missouri Confederates and bushwackers in a raid on Lawrence, Kansas. Striking at dawn, they sacked and burned the town, killing 150 local men and destroying $1.5 million in property. It was a bloody continuation of the border fighting between pro-slavery elements in Missouri and “free-state” Kansans.