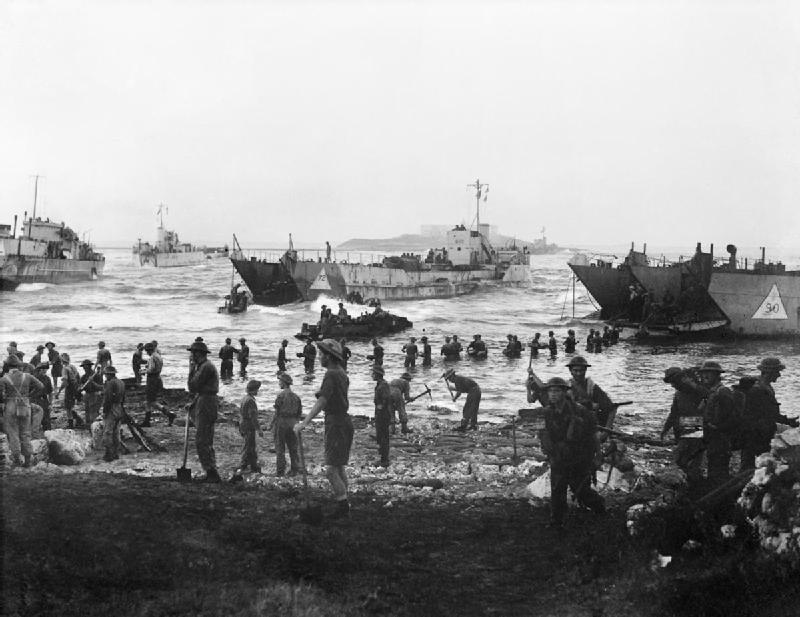 Troops from the 51st (Highland) Division unloading stores from tank landing
craft on the opening day of the invasion of Sicily, 10 July 1943.

It is in the spirit of our founder, Stephen E. Ambrose, that director and historian Mark Bielski shares some of the interesting historical events that occurred during WWII, the Civil War and the Lewis and Clark expedition in the month of July.

10 JULY Allied forces landed on the Mediterranean beaches of Sicily and for the first time brought the war to the home soil of an Axis power. A huge convoy of 3,000 ships dropped 150,000 American and British soldiers on shore. Within two more days there would be an additional 320,000 reinforcements to follow. Because of an Allied deception plan, Hitler was convinced that the invasion was to be at Sardinia. In much the same way, he would be certain the Allies were coming in at Pas de Calais, not Normandy, in 1944. The Italian defenders had been ill-prepared, thinking that bad weather would prevent any beach landings.

6 JULY The Nazi high command—namely Hitler—fired General Gerd von Rundstedt after he informed the Fuhrer that the military situation in Normandy was a disaster. He had been in several arguments by phone with Field Marshal Keitel in which he informed his commander that the counter-attack launched against the British with four Panzer divisions had been repulsed before collapsing. Whether or not this was under the supervision of Erwin Rommel, he for now was spared.

11 JULY President Franklin Delano Roosevelt held a press conference and announced that he would run for an unprecedented fourth term. In a moment of humility, he suggested that while he is Commander-in-Chief of the military, he also answers to superior officers, the American people.

In JULY the Lewis and Clark Expedition was deep in what today is Montana. They were eager to meet the Shoshone, so Meriwether Lewis went ahead with a small party and entered a large plain surrounded by high mountains. In a passage that exemplifies their mission, Dr. Stephen Ambrose gives a summation of Lewis’ feelings at the time:

Lewis was in a couple of hours’ march from one of the great gold deposits at Last Chance Gulch, in present Helena, Montana. But he wasn’t looking for gold. His lack of interest in it was one of the things that distinguished his exploration from that of his Spanish predecessors (another was his lack of interest in converting Indians to Christianity). Interested in plants and animals, especially fur-bearing animals, he paid little attention to potential mineral deposits, especially after leaving the Mandans. He had noted lead deposits on the lower Missouri, but when he entered the Rockies he hardly ever commented on rocks or minerals.

Lewis’ keen observance of nature is evident in the diaries. Dr. Ambrose notes that Lewis was aware of “passing from one ecological zone into another. On July 17, he noted that the broadleaf eastern cottonwood was giving way to the narrowleaf western cottonwood.” He also remarks on the wild berries growing as he ascends into the mountains. The abundance of yellow, black and purple currants were perfectly ripe and superior to those grown in eastern gardens.

Early JULY Although this month is most well-known for the later battle at Manassas, Virginia, there was a good deal of action in the western part of the state. Federal troops had moved in with several brigades. Three brigades in the small town of Buckhannon must have seemed like a major invasion. In what is now West Virginia, there were engagements at Rich Mountain, Cheat Mountain and Corrick’s Ford in which the Federals were largely successful.

The region was sharply divided and depending on the county, it was either pro-Union or pro-Confederate. Eventually the Unionists won out and the western counties seceded from Virginia. They formed West Virginia and the state was admitted to the Union 20 June 1863.

21 JULY The Battle of First Manassas or Bull Run took place when General Irvin McDowell advanced west from Washington toward Manassas Junction, Virginia. He had 37,000 men who were barely trained moving against the 35,000 Confederates under Generals Joseph E. Johnston and P.G.T. Beauregard. The difference was non-existent, because except for many of the officers, the men were all at the same level of experience. In the early goings, the Yankees were pushing the Rebels back when Confederate Thomas Jonathan Jackson earned his sobriquet, “Stonewall.” The Confederates won the day and the Union army retreated in disarray to the shock of many in Washington who thought it was going to be a “one battle war.”

14 JULY General John Pope, who took command of the newly formed Army of Virginia, wanted to take pressure off George McClellan’s army on the Virginia Peninsula. Pope had just come from a brief, but fairly successful, assignment in the west. Nonetheless, rather than inspiration, he resorted to braggadocio when he addressed his troops. “Let us understand each other. I have come to you from the West, where we have always seen the backs of our enemies; from an army whose business it has been to seek the adversary and to beat him when he was found; whose policy has been attack and not defense.”

This episode was a prelude to the Second Battle of Manassas the following month in which Robert E. Lee soundly defeated Pope.

11-15 JULY All of Washington mobilized as General Jubal Early and his Confederates approached from the north. They reached the outskirts of the city and as far as Fort Stevens on the northern edge of the District of Columbia. President Lincoln, always keenly interested in developments, rode out to the Fort to observe from the actual parapets. As the rebels approached, he came under fire but quickly received an admonition not usually issued to one’s Commander-in-Chief. Oliver Wendell Holmes, Jr., a young Federal officer, shouted, “Get down, you fool!”

In Mississippi, Federal troops under General A.J. Smith took the field and defeated Stephen Dill Lee and the seemingly invincible Nathan Bedford Forrest at the Battle of Tupelo. Smith was able to withstand recurring waves of Confederate attacks until by noon on the 14th they withdrew. Much to the consternation of his commander, William Tecumseh Sherman, Smith did not pursue and Forrest’s battered cavalry was able to escape.