Before we jump into events that happened in history in the month of November during WWII, WWI, the Civil War and the American Revolution, we have some thoughts for November—be positive!

“Fallen leaves lying on the grass in the November sun bring more happiness than the daffodils.” – Cyril Connolly

21 November 1939 – The HMS Gypsy sank and the Royal Navy’s HMS Belfast (a destroyer now moored in London and part of the Imperial War Museum) were disabled by the first magnetic mines employed by Nazi Germany. German U-boats and destroyers had laid them and even aircraft had dropped them into positions in British harbors, coastal waters and even in the Thames River estuary near London. Unlike contact mines that a vessel must strike to explode, a ship’s steel hull would activate a magnetic mine. After several mishaps in trying to recover a mine, British scientists set about the task of reverse-engineering and formulating a method for nullifying the deadly underwater devices.

11 November 1942 – Sensing that the experiment that allowed limited French autonomy with the collaborationist Vichy Government failed, Hitler sent troops into that unoccupied part of France. All of France was now under Nazi rule. Hitler justified this to his French puppets, Phillippe Pétain and Pierre Laval, as a move to protect the south of France from an Allied invasion. Only the port city of Toulon on the Mediterranean remained open. The plot thickened two weeks later.

27 November 1942 – The preponderance of the French fleet was anchored in Toulon harbor. Two battleships, one heavy battle cruiser, seven cruisers, 29 destroyers and two submarines were a floating prize for the Allies or the Germans. The Nazis had deliberately left the port untouched. They mined the harbor entrances and stationed warships and troop carriers in preparation to seize the fleet. Before sunrise, the French crews opened seacocks on all vessels and the Germans witnessed the scuttling of the ships they had hoped would become part of the Reich’s navy.

Winston Churchill, despite his intense hatred for French collaborationist Admiral Francois Darlan, had said that he would beg on his hands and knees to have him turn over the fleet to the Allies. Less than a month later, a young Frenchman who was opposed to Vichy and the Nazis, assassinated Darlan in his headquarters on Christmas Eve.

5 November 1944 – The U.S. Twentieth Air Force sent 53 B-29 bombers on a round trip mission of 3700 miles. Their mission was to knock out the Japanese military’s main oil refinery in Sumatra and the shipyards of Singapore, Asia’s largest naval base under Japan’s control. It was also the site of Asia’s largest dry dock.

November 1914 – The First Battle of Ypres was well underway. A series of attacks and counter-attacks by the British and French with their German adversaries had begun in late October. In mid-November, both sides had brought up reinforcements but the General Sir Douglas Haig’s (later to be Field Marshal) British I Corps was nearly routed by an assault by Prussian Guards who had smashed through their weakest point.

“A force of batsmen, cooks, headquarters staff and other ‘odds and ends’ mounted a desperate counter-attack that did just enough, just in time, and then the 2nd Oxfordshire and Buckinghamshire Light Infantry made a decisive intervention. The battle dragged on until 22 November, but the Allied line had been stabilized and Ypres, one of the few Belgian cities still in Allied hands, had been held.

In Russia there was in increasingly brutal civil war underway as various White (anti-communist groups), supported by British, French and American forces, sought to reverse the result of the Bolshevik coup. . . . An attempt to export the revolution by armed force to eastern and central Europe was thwarted, however, by the victory of the Poles against the Russians in the Battle of Warsaw in 1920.” — from Gary Sheffield’s The First World War

November 1918 – At the 11th hour of the 11th day of the 11th month the Allies, Britain, France and the United States, signed the Armistice with Germany that ended hostilities on land, sea and in the air. The chief architect of the agreement—not an official German surrender—was Supreme Allied Commander, French Marshal Ferdinand Foch. He arranged for the signing ceremony in the forest of Compiegne, France in his private railway car. The casualties of the war were astronomical. The war had left 1.8 Germans, 1.4 million French, one million from the British Empire and 115,000 Americans dead in its wake. This is only representative of the signatories present at Compiegne. As many as 11 million military deaths, and an additional 8 million civilian deaths plus another 23 million military wounded brought the total to approximately 40 million people.

21 November 1861 – Louisiana planter and politician, Judah P. Benjamin became the Confederacy’s Secretary of War. Named by President Jefferson Davis to succeed LeRoy Pope Walker, Benjamin had been the Attorney General and prior to the war and U.S. senator. Like many Louisianans, he had a colorful ethnic background. Benjamin was born in the Virgin Islands to parents who were Sephardic Jews and had migrated to the Caribbean from London. He attended Yale Law School without matriculating but read the law and passed the bar when he became a resident of Louisiana. As a cabinet member, he became a confidant of Jefferson Davis and fled Richmond with him at the end of the Civil War. Rather than be captured, Benjamin made his way to London, where he practiced law until retirement. He died in Paris in 1884.

18 November 1862 – General Ambrose Burnside moved the Army of the Potomac to Falmouth, Virginia on the north bank of the Rappahannock River. He had maneuvered his force of 110,000 men with great deliberation, thereby giving Robert E. Lee time to position his Army of Northern Virginia across the River on the high ground around Fredericksburg. Burnside meant to surprise the Confederates with a pontoon crossing and attack across the river once he was in position.  The only “surprise” for Lee and his generals was the foolhardiness of Burnside’s assault that would come in December. 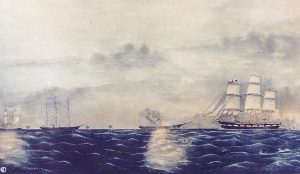 6 November 1865 – The CSS Shenandoah, the Southern raider and only Confederate ship to circumnavigate the globe, surrendered in Liverpool, England. The ship’s commander, James I. Waddell, lowered the Confederate flag for the last time and turned his ship over to the HMS Donegal after sailing up the Mersey River into Liverpool’s harbor. When Captain Waddell walked into city hall to formally surrender to the British authorities, it was the last act of the American Civil War. The Shenandoah was a 230-foot, 1200-ton sail/steam clipper with eight cannon and a crew of 109 men that could make eight to sixteen knots under steam or sail.

The men of the Shenandoah had learned of the end of the war after encountering the British bark, Baracouta, in the Pacific Ocean between Hawaii and the Southwestern coast of Mexico. For Lieutenant William C. Whittle, Jr. it “was the darkest day” of his life. “We are plunged into the deepest distress that ever men were thrown,” Whittle wrote. The Shenandoah had been en route to attack San Francisco, but changed course south toward Cape Horn and made way for England. Whittle, whose father also served in the Confederate Navy (he was a senior commander during the Federal campaign to capture New Orleans in 1862), kept a detailed diary of the voyages of the Shenandoah.

10 November 1865 – In Washington, D.C., two Union officers entered the cell of Major Henry Wirz to lead him to the gallows for execution by hanging. Wirz had been commandant of the Confederate prisoner-of-war Camp Sumter at Andersonville, Georgia. He was charged with conspiracy to injure the health and lives of Union soldiers and murder. After a two-month trial, he was found guilty and sentenced to death.

“At exactly thirty-two minutes past ten . . . the trap fell with a heavy noise, and the Andersonville jailor was dangling in the air. There were a few spasmodic convulsions of the chest, a slight movement of the extremities, and all was over.” — The New York Times, 11 November 1865.

The 41-year old Wirz, who was originally from Switzerland, had served as a Confederate exchange officer and prison commander and oversaw an operation in which thousands of prisoners died. Some saw him as a scapegoat since he had few resources available from a collapsing government. Others, such as poet Walt Whitman said, “There are deeds, crimes that may be forgiven, but this is not among them.”

11 November 1778 – The New Yorker, Walter Butler, who had remained loyal to the Crown, led a force of Loyalists and Mohawks in a massacre of local militia and civilians at Cherry Valley, New York. The war had arrived in the Mohawk Valley.

28 November 1778 – The British dispatched 3,000 troops from Sandy Hook, New Jersey, under the command of Colonel Archibald Campbell. His mission was the retaking of the colony of Georgia. In December, the Scotsman would be victorious at the Battle of Savannah and again at Augusta.