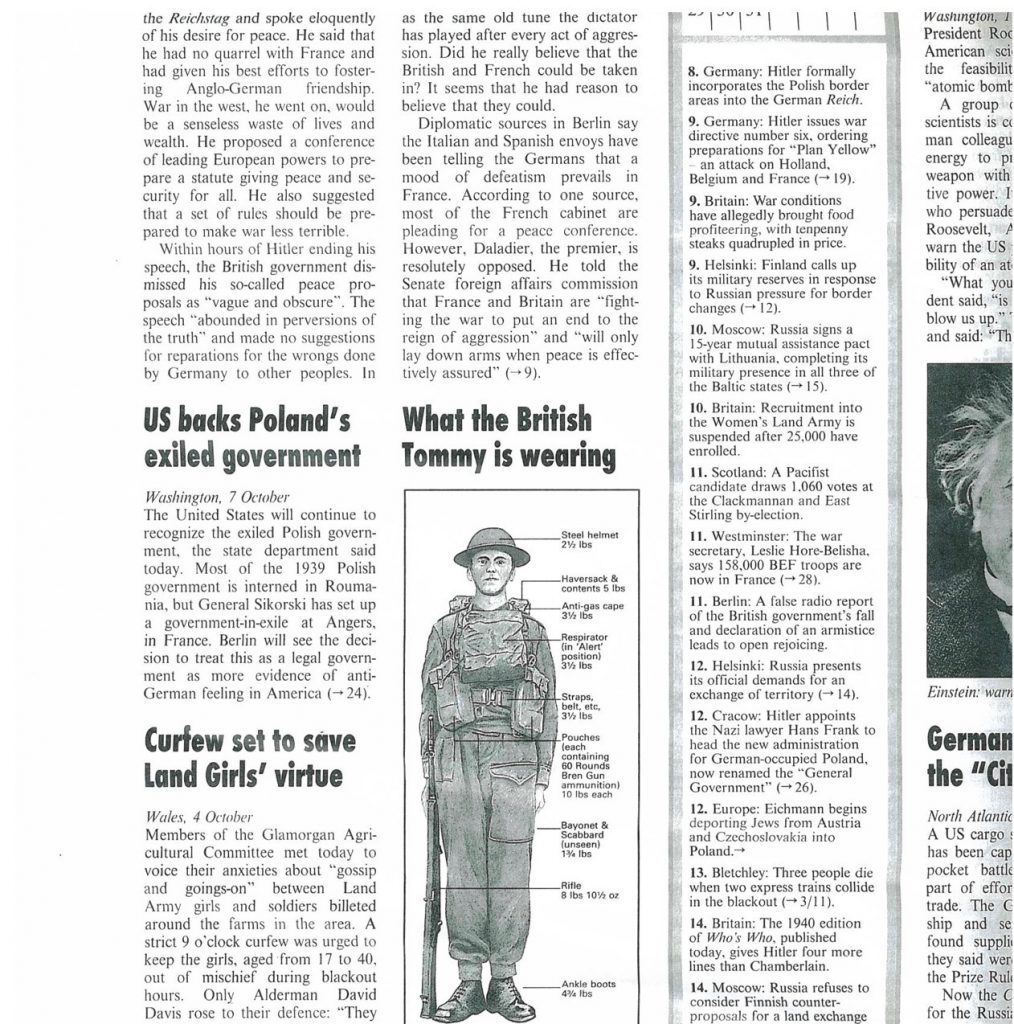 Before we jump into events that happened in history in the month of October during WWII, the Civil War and the Cold War, I have some thoughts:

“What happened in the missile crisis in October 1962 has been prettified to make it look as if acts of courage and thoughtfulness abounded. The truth is that the whole episode was almost insane.” – Noam Chomsky, American Linguist and Political Activist

“In view of the fact that God limited the intelligence of man, it seems unfair that He did not also limit his stupidity.” – Konrad Adenauer, German Statesman, 1876-1967

This may be one of my favorite all-time quotes. Adenauer, Chancellor of West Germany (leader of the Christian Democrats) was a Catholic from the Rhineland who strongly distrusted the Russians and Communist Party of East Germany.

6 October – Adolf Hitler appeared at the Reichstag in Berlin to announce that he desired nothing more than peace. His armies were completing their invasion of Poland along with the help of the Soviet Union, yet he wished to present himself as the messenger of peace and friendship. The British and French, allied with the Poles, had declared war on Germany in the beginning of September. However, Hitler stated that he had no quarrel with France and he urged Great Britain to accept his offer of friendship.

The government in London dismissed his senseless talk as “perversions of the truth,” and France denounced Germany’s most recent aggression in Europe.

7 October – The United States officially announced that it recognized the Polish Government in Exile under General Wladyslaw Sikorski. The Poles had already established their headquarters in Angers, France.

The average British Army Infantryman went into action with over forty pounds of equipment on his person.  From the combined ten pounds for rifle, bayonet and scabbard, to ammunition pouch of ten pounds to respirator (3.5 lbs.), anti-gas cape (3.5 lbs.) helmet and haversack of 2.5 and five pounds respectively, he was loaded down.  Don’t expect him to do any distance swims. [SEE ILLUSTRATION]

19 October – In a daring attack planned for the British oil refineries on the Persian Gulf Island of Bahrain, four Italian bomber planes left the Mediterranean island of Rhodes. They flew for 15 straight hours: first 3000 miles to Eritrea, then triangulating their route east to Bahrain. After each plane dropped more than 60 30-lb bombs, the pilots radioed their success, noting that they could see the fires long after they left the area.

However, the British declared that there was little damage and that the Italian bombers had missed for the most part. What the pilots saw had been mostly safety flares.

17 October – German U-boats torpedoed the American Naval destroyer, USS Kearny off the coast of Iceland. The Kearny was one of five warships en route to assist a convoy that had lost most of its armed escort in a storm when U-boats attacked. Plainly visible due to the illumination from the blazing vessels, it made an easy target. A direct hit on the starboard side killed eleven sailors and injured many more. Fortunately, the ship was able to withdraw to safer waters near Reykjavik under its own power.

24-31 October – The war in North Africa took a turn for the better as the Allies were able to mount a successful offensive against the Axis forces. British General Bernard Law Montgomery began with a massive artillery barrage with over 1000 pieces of heavy artillery while his 195,000 Allied troops readied themselves for a frontal assault. The terrain, massive minefields and the positioning of Field Marshal Ewin Rommel’s Africa Korps made a flanking or encircling maneuver unrealistic.

By the end of the month the Germans had lost 75% of their Panzers and the British and AnZac troops (Australia and New Zealand) had broken through. Montgomery knew that if he could not outwit Rommel, the Desert Fox, he could win by means of attrition. He had almost double the fighting men, 1,029 tanks to Rommel’s 489, 2,300+ guns to the Axis’ 1,200 and 570 aircraft to the Germans’ 675.

20 October – Union Army commander George B. McClellan was suspicious of Confederate activity across the Potomac River in the vicinity of Leesburg, Virginia. He had General Charles Stone organize a reconnaissance mission to quantify the troop strength and identify the positions of Colonel Nathan Evans’ Confederates. One of the scouting party leaders mistakenly reported an unguarded rebel camp near the river—it was a copse of trees.

Colonel Charles Devens organized an attack the following day. Political appointee, Senator Edward Baker of Oregon and good friend of Abraham Lincoln, took charge of sending in reinforcements had only four small boats to ferry men across the Potomac. Evans organized a counter attack and drove the Federals back toward and over the bluff into the river. Many drowned trying to escape and hundreds surrendered. A hail of bullets felled Baker and he died in the melee. Although a relatively small battle with 921 Union casualties to 149 on the Confederate side, it was a humiliating disaster with grave repercussions. Lincoln was distraught at the loss of his friend and furious Radical Republicans in Washington searched for a scapegoat.

7 October – At Perryville, Kentucky, Major General Don Carlos Buell’s Army of the Ohio, battled General Braxton Bragg’s Army of Mississippi. It began with skirmishing between Union and Confederate troops on the Springfield Pike before the actual battle began on Peters Hill. The following day, a Union division advanced up the pike and a Confederate division struck the Union left flank and forced it to fall back. As the Southern reinforcements arrived, the Union line made a stubborn stand, and counterattacked, but eventually retreated. Union troops stabilized their left with reinforcements of their own and the Confederate advance slowed.

Later in the day, three Confederate regiments struck a Union division on the Springfield Pike but stiff resistance made them pull back into Perryville. Bragg deciding he was lacking munitions and more importantly, sufficient manpower, withdrew during the night. Tactically, the Confederates were victorious, but Bragg’s withdrawal effectively ended the campaign in Kentucky.

As private Sam Watkins of the 1st Tennessee Infantry noted, both sides claimed victory, but both sides were whipped.

The Cuban Missile Crisis. Joseph Stalin died in 1953 and Nikita Khrushchev had risen to power. Tensions between the two superpowers, the U.S. and Soviet USSR, had escalated in Europe and although neither country wanted nuclear war, no one was certain it would occur. During the late 1950’s President Dwight D. Eisenhower and Soviet Premier Nikita Khruschev had decided that neither one of them could end the Cold War single handedly. The Soviet leader respected Eisenhower, but was aware that he would step down after his second term ended in 1960.

In Cuba, Fidel Castro, a Marxist-Leninist had overthrown the pro-American regime of Fulgencio Batista in 1959. Castro and his radical leftists, including the firebrand militant Argentinian Marxist, Che Guevara, had taken over and allied the island nation with Moscow. John F. Kennedy had become President in 1961 and his administration felt that having this Communist regime so close and in a position to spread its doctrines to other Latin American countries was intolerable.

The disastrous Bay of Pigs invasion was in April of that year and it ended tragically when the brigade of CIA-trained Cuban exiles failed to incite the people of the island to revolt. With no air support, they were quickly defeated, killed or round up and imprisoned.

This failure emboldened Khrushchev and he was willing to test Kennedy further. He and his comrades in the Soviet Politburo felt that the U.S. was encroaching on Soviet borders with missile and troop deployments. Now that Cuba was a Soviet ally, he decided to place missiles on the island, as he said “secretly . . . we can declare it afterwards.” This was a new “offensive policy” for the Soviets. Placing missiles on Cuba had no legitimate defensive reason such as the protection of the USSR’s borders. Historical analysis suggests that this was to pressure Washington into negotiating on other issues such as the status of Berlin. It was not to initiate a “suicidal first strike.”

The missile emplacements were not secret for long. Between U-2 spy plane overflights, the CIA, and Cuban exile informants, the U.S. figured out what the Soviets were up to. Kennedy could have pursued the issue privately with his Soviet counterpart, but Republican criticism and pressure drove him to make it a more public issue. He even considered air strikes and a full-scale invasion of Cuba.

On October 22, 1962 Kennedy announced that the U.S. would establish a Naval Quarantine around the island of Cuba. This would prohibit more Soviet weaponry from arriving henceforth. He also demanded that those missiles currently in Cuba must be dismantled and removed. As a back-up, the Pentagon prepared five divisions of troops in case an actual invasion became a necessary last resort.

Khrushchev responded with typical bluster. “We will not retreat one step” from our program, he declared. While the world waited tensely, the Presidium in Moscow approved a compromise that Khrushchev proposed. The USSR will trade their missiles for a pledge from the U.S. not to invade their Caribbean island ally, Cuba. He sent Kennedy a private letter to this effect on October 26.

Both countries had acted aggressively and coming from the new American president, this was somewhat of a surprise to Moscow. Yet the compromise had averted disaster—or worse—and for a time people could breathe easy. Nikita Khrushchev was not able to save face in the incident and John Kennedy was proclaimed a master of brinkmanship. He had won the confrontation and the ticking bomb that many thought was Cuba was diffused.