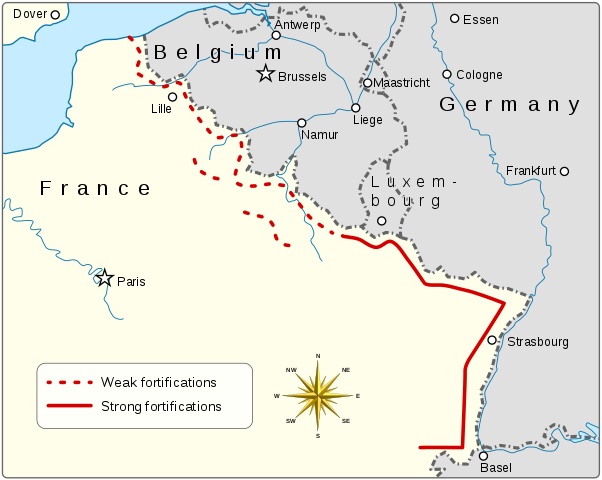 It is in the spirit of our founder, Stephen E. Ambrose, that director and historian Mark Bielski shares some of the interesting historical events that occurred during WWII and the Civil War in the month of October.

21 OCTOBER – The French government decided to trust its “invincible” Maginot Line. The line itself was a series of complex defensive fortifications constructed both above and below ground along the border with Germany. A labyrinth of tunnels connected the main forts and gun emplacements. It gave a clear signal to the Germans that the French were committed to defensive warfare rather than an attack. When Hitler invaded Poland, some French units advanced into Germany’s Saarland but posed no threat to their enemy in this so-called “Phoney War.” As soon as the French became aware of some advancing Wehrmacht troops, they withdrew back into France. There were no defenses along the Belgian border, from where Germany would invade France the following June.

31 OCTOBER – The team of Polish cryptologists, led by Colonel Gwido Langer, arrived in France to continue their work on the German Enigma enciphering machine. They brought with them two of the machines that Polish intelligence officers had captured from the Nazis.

11 OCTOBER – Italian dictator, Benito Mussolini, had proclaimed the Mediterranean Sea “Italy’s Lake,” but neglected to inform Britain’s Royal Navy. The HMS Ajax sunk two Italian torpedo boats with bursts from her six-inch guns. The British light cruiser also disabled the destroyer Antigliere, which left the Italian ship dead in the water. The HMS York finished the deed the following morning by sinking the then crew-less Antigliere. The action was labeled the “Battle of Cape Passero” and occurred 128 km south of Sicily.

12 OCTOBER – Portugal had been officially neutral in WWII, but Prime Minister Dr. Antonio decided to honor the 600-year old Anglo-Portuguese pact and give the Allies access to the Azores. The strategically located islands in the Atlantic lie roughly 1000 miles west of Lisbon. The Allies now had a base for military operations and aerial protection of shipping between the U.S. and Great Britain.

4 OCTOBER – Louisiana Governor Thomas Overton Moore issued a ban on cotton shipments from New Orleans. This was a tactical ploy to keep American cotton from reaching European ports and English textile mills. The South produced 90% of the world’s cotton and starving mills of raw product would convince the British the importance of coming to the aid of the Confederacy for economic reasons.

3-4 OCTOBER – The Battle of Corinth, Mississippi. Generals Earl Van Dorn and Sterling Price launched a combined attack against the Federal troops under William Rosecrans who manned strong defensive positions on the outskirts of town. Van Dorn and Price drove the enemy back into the town until fighting subsided that evening. The Confederates attacked again the next morning, but were driven back repeatedly until finally forced to withdraw with casualties of 4233 (killed 473, wounded 1997, missing 1763). The forces had been evenly matched at 22,000 Confederate and 23,000 Union. But Northern casualties were lighter at 355 killed, 1841 wounded and 324 missing. It was a victory for Rosecrans and a setback for Van Dorn who suffered from his costly head-on attacks.

18 OCTOBER – General Ulysses S. Grant took official command of the U.S. Military Division of the Mississippi. He was now in control of Union military operations from the Appalachian Mountains to the Mississippi River.

Confederate Naval officer, Captain James Waddell had devastated the U.S. whaling fleet in the Pacific in the spring and early summer of 1865. On 27 June, a captain from a captured whaler informed him of the Confederate surrenders in Virginia, North Carolina and Louisiana. He also gave Waddell a copy of a San Francisco newspaper that contained Jefferson Davis’ proclamation to carry on the fight. Waddell then proceeded to capture ten more whalers near the Arctic Circle. In August he learned from the captain of a British sailing barque, the Barracouta, that the war indeed was over and the capture of Jefferson Davis. He lowered the Confederate flag and ordered his crew to sail for Liverpool, where he surrendered his ship to the British government on 6 November. His was the only Confederate ship to circumnavigate the globe. Later in life Waddell, directed the management of the oyster fleets on the Chesapeake Bay. He died in Annapolis, MD and is buried there in St. Anne’s Cemetery.