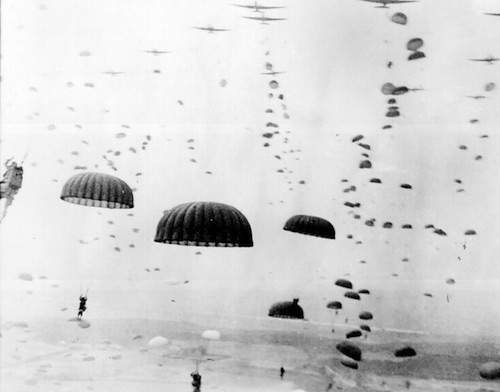 As Stephen Ambrose said, “The past is a source of knowledge, and the future is a source of hope. Love of the past implies faith in the future.” In this spirit, director and historian Mark Bielski shares some interesting history happenings that occurred in the month of May during WWII, WWI and the Civil War.

10 May In the continuing quest to expand German dominion over the entire continent of Europe, the Nazi war machine began its attack on the Low Countries of Holland and Belgium. In the pre-dawn hours, the bombers, first of the Luftwaffe’s 3,000 aircraft, came out of the sky to destroy airfields and planes on the ground. Airborne troops followed and seized key positions at bridges, power stations and communications. Parachutists descended from gliders in concentrated numbers to hit Dutch and Belgian military sites as screaming Stuka dive bombers dropped their loads to spread panic among the civilian populace. Once the two countries had been softened up squadrons of Panzer tanks advanced across the flat terrain to complete the rout for the oncoming swarm of 200,000-plus Wehrmacht ground troops. Subjugation would soon follow.

9 May In the Pacific theatre, the Battle of the Coral Sea became the first American Naval victory against the Japanese Imperial Navy. The Japanese goal was to set out with a large amphibious task force to capture Port Moresby in Papua, New Guinea and gain control of the Coral Sea. This objective, once achieved was to be their staging point to cut off Australia from SE Asia. Learning of the Japanese plans, Admiral Chester Nimitz sent a task force under Rear Admiral Frank Fletcher that included the aircraft carriers Lexington and Yorktown. Fletcher intercepted the Japanese force, sunk their light carrier and knocked out a great number of their aircraft. The Lexington was sunk and the Yorktown received damage, but it was a strategic victory and a morale boost for the Americans. It was the first time the Allies had turned around a Japanese invasion force thus far in the war.

Stephen Ambrose was relentless in his pursuit to honor the men who fought on D-Day. He founded the D-Day Museum in New Orleans, now The National WWII Museum. He wrote D-Day: June 6, 1944, giving people a deeper understanding of the battles that raged on Omaha and Utah beaches from a soldier’s perspective. He conducted more than 1,400 interviews with D-Day veterans, traveling with them to Normandy to record their stories.

Our D-Day to the Rhine Tour is based on his research and passion. Simply put, it is the best, most authentic D-Day tour you can take.

Book your D-Day to the Rhine Tour>>

22 April – 25 May The 1st Canadian Division defeated the Germans during the Second Battle of Ypres. Located in western Belgium, the Flemish town was a roadblock in Germany’s march across Belgium and northern France, so this battle was a key victory for the Allies. The nearby town of Langemark was the site of the first use of gas on the Western Front by the Germans.

31 May – 1 June The Battle of Jutland between the British Royal Navy’s Grand Fleet and the Imperial German Navy’s High Seas Fleet was the largest naval battle in WWI. 250 ships and 100,000 men were involved in this clash off of Denmark’s Jutland Peninsula in the North Sea. While both sides claimed victory, Britain retained control of the North Sea.

Our WWI Tour marks the 100th anniversary of the War to End All Wars. We travel to the most significant sites along the old Western Front. Historian Chris Anderson, who is a WWI expert, interviewed British veterans of WWI and surviving American Doughboys after college. Their stories add a personal dimension to this tour.

Book now to be part of this historic experience>>

20 May North Carolina, had been the most reluctant Southern state to leave the Union, but the convention delegates assembled in Raleigh and voted unanimously to secede. The “Old North State” became the eleventh and final state to form the Confederacy.

24 May In a story that ties-in with the PBS Original Series Mercy Street, the Yankee occupation of Alexandria, Virginia began. Soon, Union officers would commandeer some homes of Confederate loyalists, such as the Green family, and hotels would convert to military hospitals. That Friday, Federal troops moved across the Potomac River to occupy the city as a small Confederate garrison withdrew with minor skirmishing. The owner of the Marshall House hotel, James Jackson had the secession flag flying proudly as Union troops moved into the center of town. Colonel James Ellsworth led a troop of New York Zouaves to rush the hotel and remove the flag when Jackson confronted him armed with a shotgun. When Ellsworth did not back down, Jackson fatally shot him. Jackson was in turn felled by a musket ball from Private Brownell, part of Ellsworth’s command.

President Lincoln was personally acquainted with the Ellsworth family, and wrote a heartfelt letter of condolence to the parents. He also had the young colonel’s funeral services held at the White House that weekend.

3 May General George B. McClellan’s Army of the Potomac that had landed on the Virginia Peninsula after the massive amphibious transfer (see 31 March Newsletter) had now grown to 110,000 men and continued to advance toward Richmond.

Saturday saw the withdrawal of Confederate troops from historic Yorktown, Virginia. General Joseph E. Johnston was facing an army that outnumbered him 2-1 and knew his troops were facing an enormous bombardment from Federal siege guns. However, after holding off the Federals for a month he withdrew westward toward Virginia’s old colonial capital of Williamsburg.

4,5 May That Sunday, McClellan’s army took Yorktown, a feat which the British had not been able to accomplish when challenging George Washington in the Revolutionary War. The following day was the Battle of Williamsburg.

25 May General Thomas Jonathan “Stonewall” Jackson was a devout Presbyterian who eschewed, among other things, fighting on the Lord’s Day. Nonetheless he had been intent on pursuing General Nathaniel Banks up the Shenandoah Valley and decided to attack him that Sunday. In the Battle of Winchester (Virginia) Banks’ men put up a stiff resistance at first before the relentless Confederate assault caused them to break and retreat in confusion toward the safety of the Potomac River and Harpers Ferry.

You will not find another tour company that offers the level of expertise of our Civil War historians. It is an unrivaled tour experience. Most of our Civil War tours for 2017 are sold out, but you can still book one of the few remaining spots on the above dates.

Book your spot on This Hallowed Ground Tour>>

Book your spot on the Mississippi River Campaign Tour>>