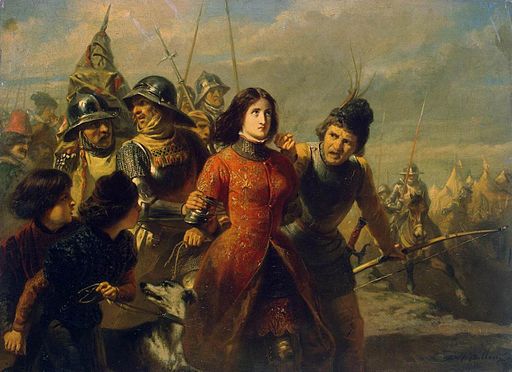 Since this month’s History Happenings take place during March, Women’s History Month, we are honoring the women who have had great accomplishments and made a difference. Our historian Mark Bielski covers great women in history from Medieval times through the American War of Independence, the Civil War and 20th Century. Photo: Capture of Joan of Arc by Adolphe Alexandre Dillens

Joan of Arc (Jeanne d’Arc), the patron saint of New Orleans, was a peasant girl born at Domrémy, France. As a teenager, she began to hear inner voices that came from the saints and angels. As she said, these voices included St. Michael and St. Catherine of Alexandria. They instructed her to help France and lead its rightful king, Charles VII, in the war against England in what became the 100 Years War. Once she received and audience with Charles, she convinced him to let her lead the French army. Joan’s charisma and passion inspired the troops, even though she was only a girl of seventeen years. Soon she won a great victory and liberated the city of Orléans.  She continued her campaign and won other battles against the English and their French Burgundian allies.  However, in a fight at Compiegne, she fell from her horse only to have the Burgundians capture her and turn her over to the English.

In February and March 1431, Joan went through a series of interrogations by a tribunal in which she was accused of heresy, witchcraft and—dressing as a man—which she did out of practical reasons in order to go into battle.  During the grueling questioning, she always frustrated and bettered her accusers with her logic and belief in her cause.  Historian Daniel Hobbins wrote that she was doomed primarily because her guiding voices had pitted her against the English.  After a trial held behind closed doors, they found Joan guilty of heresy and sentenced her to death.  Throughout the ordeal, she always maintained her innocence.  Finally, the tribunal used her crime of dressing as a man in military garb to condemn her.

In May of that year, her captors burned her at the stake in Rouen, Normandy. Her canonization as a saint came in 1920 and the French people remember her with a national holiday each second Sunday in May.

It is a legendary story that Betsy Ross, a Quaker from Philadelphia, made the first United States flag. According to her grandson, in 1776 General George Washington and members of the Continental Congress, asked Mrs. Ross to make a flag for the fledgling country that was about to declare independence from England.  It is interesting to note that Washington had wanted to use a six-pointed star to represent each of the thirteen colonies.  However, Betsy recommended the five-pointed pentagram.  As a seamstress, she may have suggested this because it was an easier pattern to sew.

At the same time, there were other Philadelphia seamstresses making flags. There are records that Margaret Manning and Cornelia Bridges did such work, as well as another lady, Mary Pickersgill. Her daughter would later sew the flag that flew over Fort McHenry in Baltimore during the War of 1812.  This was the same flag that inspired Francis Scott Key to pen America’s national anthem, “The Star Spangled Banner.”

Just outside of Washington, DC and stretching into Maryland is the Clara Barton Parkway.  This idyllic, tree-lined drive along the Potomac River belies the turmoil that Clara Barton thrust herself into during the Civil War.  She began her nursing career during the Civil War by providing relief and comfort to Union soldiers stationed in the many camps or interned in the hospitals around the Capital.

In 1862, she went to Fredericksburg, Virginia, to provide aid to the soldiers stationed there.  In December of that year, Clara Barton was at Chatham House on the Rappahannock River and witnessed the fierce battle of Fredericksburg. As the fighting raged, she helped the wounded soldiers from North and South as they were brought into the house, which was now a makeshift hospital. Even as artillery shells struck the house and surrounding grounds, she continued her duties administering to the wounded.

Later in the war, she traveled the fifty miles from her home in Washington to take care of the wounded during the horrific battles of the Wilderness Campaign and Spotsylvania.

Years later, Clara Barton went to Europe and found herself immersed in the Franco-Prussian War.  This time, she provided much needed assistance to the women and children who were sick, hungry and homeless due to the destruction of their cities and villages.  Inspired by the newly created International Red Cross, Clara would go on to establish the American Red Cross when she returned to the U.S. and pledged to provide aid to the unfortunate wherever possible. In doing so, she proposed a mission statement:

“War, although the most tragic, is not the only evil that assails humanity…The American Society of the Red Cross asked to have included in its charter the privilege of rendering such aid as it could in great calamities, as fires, floods, cyclones, famines and pestilence.”

On 1 July 1943, President Franklin Delano Roosevelt signed the legislation that made the Women’s Army Corps (WAC) officially part of the United States Army.  This was a landmark move, in that it gave these women the same rank, privilege and benefits of the men serving in the military.

Massachusetts Congressional representative, Edith Rogers had introduced a bill that would create the Women’s Army Auxiliary Corps in 1941. She wanted to ensure that women who served would have the same status as the men in the armed forces.

Women of all walks of life volunteered from every state and territory.  Among this number were blacks and Japanese-Americans.  Eventually, these women took many positions.  In the Army Air Forces, some became weather forecasters; on the ground, many were radio mechanics and code senders. In the Army Service Forces, they worked as medical and surgical technicians. Some of the Nisei, or Japanese-American women, were translators in post-war Tokyo for General Douglas MacArthur.

Early in the war, Chief of Staff General George C. Marshall demanded the formation of the women’s corps to ease the shortage of manpower.  In 1943, with enlistments waning, General Dwight D. Eisenhower expressed the necessity of their service:

The simple headquarters of a Grant or Lee were gone forever.  An Army of filing clerks, stenographers, office managers, telephone operators, and chauffeurs had become essential, and it was scarcely less than criminal to recruit these from needed manpower when great numbers of highly qualified women were available.