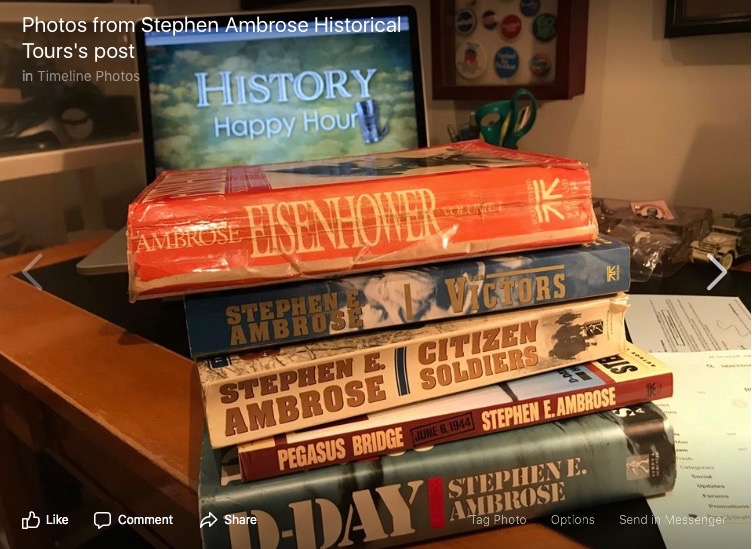 Launched on March 20, 2020, 51 shows and 47 guest interviews later, the History Happy Hour livestream is celebrating its one-year anniversary! Every Sunday at 4pm EDT, co-host historians Christopher Anderson in London and Rick Beyer in Chicago each grab a cocktail and go live to talk history (and maybe some smack) on the Stephen Ambrose Historical Tours Facebook page and YouTube channel. They have welcomed fascinating and knowledgeable guests such as authors Andrew Roberts, Joe Balkoski, and Hampton Sides for entertaining history discussions, as well as viewers, who get to join the conversation with questions and comments.

With the pandemic closing tours down last year, Chris and Rick, both historians for Stephen Ambrose Historical Tours, were looking for a way to stay connected with history and the guests who come on the historical tours they lead for our company. One of the best parts of a Stephen Ambrose tour is crowding into the bar at happy hour to have a drink and discuss the places visited during the day and kibbitz over history tidbits. Thus, was born the inspiration for History Happy Hour.

At first, History Happy Hour was just Chris and Rick discussing a historical topic of interest, but soon they started reaching out to other historians and authors to join the conversation. That’s when the show really took off. 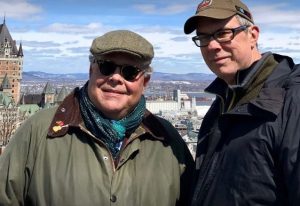 “At first I sort of viewed the show as a simple way to pass some time and to give some historical focus to my days,” said Chris. “As the lockdown continued, it became much more to me. I realized that the show is an important way for the Stephen Ambrose Historical Tours family to stay in touch with one another and to share the thing we love so much—history—even through some pretty dark times. Every Sunday when I sit down at my desk to start the show, I get the same thrill as when I step on the bus with a new group at the start of a tour. History Happy Hour has shown me that entertaining and informative history can come in many, many, forms. I’d like to think that Dr. Ambrose would approve.”

“For me, this has been like a fabulous year-long graduate seminar,” said Rick. “It has been awe-inspiring, and sometimes humbling, to have a chance to talk with history authors who I have admired for years! While many of our shows have focused on aspects WWII and WWI, we have also done shows on Ancient Rome, the American Revolution, the Civil Rights movement, and the Plains Indians. There have been shows that were a total revelation, where Chris and I learned something new every minute. And other shows where we got to take a deeper dive into stories we were already conversant with.”

Among the many fantastic moments of History Happy for Rick over the last year is when Andrew Roberts explained that he writes at a rate of 5000 words a day, fueled by Red Bull. “That gets me a great deal of hatred from other writers” Roberts said. “Since I think writing 800 words a day is a fast clip, I can tell you I was totally gobsmacked,” Rick says.

Based on comments Chris and Rick have received from their guests, it seems that many of the authors and historians have enjoyed the show as much as Chris and Rick.

“I appreciated your well-informed questions and your relaxed but incisive interviewing style. Bravo to you both!” – John Matteson, author A Worse Place Than Hell

“A lot of fun—really appreciate your having me, it went by like the wind!” David Michaelis, author, Eleanor

“Great Fun!”  Tom Standage, author, A History of the World in Six Glasses

While most viewers are located in the United States, the show also has viewers from as far away as France, Belgium, Netherlands, Spain, and Japan, many of whom have rarely missed an episode.

“I think the formula for History Happy Hour is just about perfect: two experienced hosts, each of whom provides a different perspective on the discussion; an extremely knowledgeable guest, who provides depth and personal insights into the topic at hand; and a well-informed audience, who pose questions that take the show in interesting directions. All that and your favorite beverage … what more could one ask for??” – Jim Lattin, San Francisco

“Great stuff. You have discovered gold in what you are doing!” – Wally Morrison

“History Happy Hour has been the weekly bright spot for the past year…always fun, fascinating and informative…and almost as good as traveling with Chris and Rick and the rest of the gang!!!  (really, it’s kept me sane!) – Doreen Gibson

Chris Anderson is a historian who is well versed in many aspects of American history with special expertise in the Normandy Invasion, Band of Brothers, and 101st Airborne as well as the American Revolution. As the former editor of WWII Magazine he edited and wrote about all areas of the U.S. involvement in that war. Chris was also one of the original creators of the Stephen Ambrose Band of Brothers Tour and a personal confidant of Major Dick Winters, commander of Easy Company, as well as many other veterans of WWII. He lives in London, where he chronicles his visits to the places where history happened and the fascinating people he meets along the way in his blog, History Hikes.

Rick Beyer is an award-winning documentary filmmaker and New York Times best-selling author. His most recent book, Rivals Unto Death, explores the intricate thirty-year rivalry between Alexander Hamilton and Aaron Burr. Rick has been researching the Ghost Army, a top secret WWII unit, for more than a dozen years, and has led the Stephen Ambrose Ghost Army Tour since 2014. He produced and directed the award-winning PBS documentary The Ghost Army, and co-wrote (with Liz Sayles) of The Ghost Army of World War II. The book is now being developed as a Hollywood movie by the producers of American Sniper.

Over the last 20 years Rick has made numerous history documentaries for The History Channel, National Geographic, the Smithsonian Institution, and others. He is the author of the The Greatest Stories Never Told series. He has shared his unique take on history with audiences around the country and appeared on CBS News, Fox News, NPR, CNN and elswhewere. A graduate of Dartmouth College, he lives in Chicago.