If you make a right out of my terraced house, the first major road you come to is Maida Vale, otherwise known as the A5. Turning to the right on the A5, as I usually do, you will eventually bump into Marble Arch, Oxford Street and Hyde Park. It would be familiar territory to just about anyone who has visited London. Recently, however, I turned left. I was heading out to have a look at Kilburn Park Underground Station and a nearby World War I memorial.

Unlike Westminster, Kilburn is not one of your “tonier” neighborhoods and you are unlikely to stumble into too many tourists. But, like so many of the unexplored places in the city, it has an amazing—if too often overlooked—history. Ancient Britons had trod the path of what would become the A5 for centuries before the arrival of the Romans who paved and widened it so that its legionaries could move efficiently from Dover, across the Thames to points deep in the interior. After the Romans left, the route continued to be used and by the time Geoffrey Chaucer and other pilgrims walked along it between St. Albans and Canterbury it was known to one and all as Watling Street.

I wasn’t going as far as Chaucer on this trip. Walking up Watling Street a short way I stopped at the now sadly boarded-up Red Lion pub. Originally built in 1444, the Red Lion stood on the site of Kilburn Priory, which gave its name to the area. Just beyond the old priory site is Cambridge Avenue, which leads to Kilburn Park Underground Station. As you walk down the street you would have to be blind to miss what has to be one of the ugliest, but quirkiest old churches in the entire city. And I love it.

Looking a little worse for wear, the corrugated iron church that was the home of St. James Episcopal was put up by developer James Bailey in 1863 as a temporary structure while he built homes in this part of Kilburn. Corrugated iron buildings do not really fit into the area’s aesthetic, but as Bailey assured worried locals at the time, the building was only temporary and would be replaced with a “proper” church once his development was complete. Fortunately for us, Bailey went bankrupt in 1866.

The idea of bending sheets of iron and using them as building material sprang from the fertile mind of British civil engineer Henry Robinson Palmer in 1829. Railroad aficionados will know Palmer as the designer of the world’s first elevated railway. Three years after developing corrugated sheets, Palmer sold the patent to Richard Walker. A clever businessman, Walker was soon advertising “portable buildings for export,” using Palmer’s sheets. Business, however, was slow. The buildings did not hold up well to the elements. This all changed when Walker began dipping his sheets in molten vats of zinc in a process called “galvanization” that had been developed by Frenchman Stanislas Sorel in 1836.

The marriage of Palmer and Sorel’s inventions could not have come at a better time for Walker. Rapid industrialization in Great Britain meant that thousands of people were moving from the countryside to industrial cities that were bursting at the seams. All sorts of buildings were quickly needed to give these people places to live and work.

At the same time, Queen Victoria’s red-coated soldiers were expanding her empire to the furthest reaches of the globe. Between 1815 and 1915 the British Empire expanded by 10 million square miles and gained 400 million souls. Imperialist Alexander Campbell was not being facetious in 1852 when he boasted, “The sun never sets on the British Empire.” All of this territory, of course, needed administration, and all these administrators needed a place to get out of the sun.

Overnight an industry was created to satisfy the need for buildings that could be built cheap and fast. Walker and his competitors were soon sending their British-built buildings to every corner of the empire as well as to the homesteaders settling the American West. Amongst the buildings in greatest demand were ones that could be used for worship. David Rowell and Company advertised churches for 400 persons, “delivered to the nearest railhead and constructed on a pre-existing foundation for £300 complete.” By 1851, 19 of these “tin tabernacles” had been built in Melbourne, Australia alone.

Traditionalists were horrified. Leaders of established churches did not like the fact that the prefab churches could be quickly built by non-conformist preachers who were attracting large congregations. Architects and designers found the buildings to be an eyesore-which they probably were. William Morris, a leader in the Arts and Crafts movement, was so appalled that he published a pamphlet criticizing the utilitarian buildings and warning darkly that they, “were spreading like a pestilence over the country.”

It was at the height of this prefab construction boom that Kilburn got it’s very own tin tabernacle. It served the Church of England until the late 19th century when, probably to the relief of traditionalists, congregants started attending the recently dedicated, and far more lavish, St. Augustine’s, “the Cathedral of North London.”  Congregationalists worshipped there for a while before the tabernacle’s time as a house of God came to an end. By 1920 it was known locally as the Lord Lloyd of Dolobran Hall and served the, by then, largely Irish Catholic community of Kilburn.

At the height of the Blitz the former church was used by air raid wardens and the fire service as a place to rest between raids, conduct training exercises and store equipment. At the end of the war, much of the area was in rubble and the old church should have been cleared away as new homes were built. Fortunately, it wasn’t. It went to sea instead—sort of.

It was the building’s utilitarianism and simplicity that saved and then transformed it. In 1949, the Willesden and St. Marylebone Sea Cadets were in desperate need of a home. Large function halls were few and far between in post-war London and the cadets needed a place to meet. Sea Cadets are a youth organization with close ties to the Royal Navy. The old tin church seemed a suitable place and the cadets moved in. 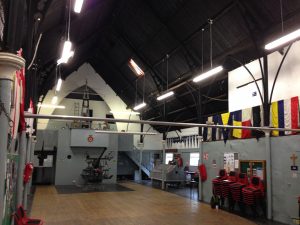 The one problem was that their headquarters was a bit too far from the sea. Undaunted, someone in the group hit upon a wonderfully unique solution. Two derelict double-decker London buses were obtained from somewhere, disassembled and the components used to reconstruct the various rooms of a Ton-class minesweeper in exacting detail inside the old church. Re-christened S(ea) C(adet) C(orps) Training Ship Bicester, the old church was home to generations of young cadets until the “ship” was decommissioned in 2019. Ironically the cadets, like many in the original congregation, moved to St. Augustine’s-where they definitely have NOT been allowed to build another land-locked ship.

I’ve seen many pictures of the inside of Kilburn’s tin tabernacle and the “ship” remains as the cadets left it. There are officer’s and NCO’s messes, a galley, communications room and, where the altar once sat, a full-scale reproduction of a ship’s bridge. At some point, the altar used in the movie “Becket” was donated and used as the centerpiece of a reconstructed naval chapel. For me, the pièce de résistance has to be the 1942 dated 40mm Bofors gun which still has pride of place in the center of what had once been a church.

Today, under the name “Cambridge Avenue Hall,” Kilburn’s tin tabernacle has returned to the community and, prior to COVID restrictions was used for art instillations and as a meeting place for a local folk music club. I can’t wait to get aboard once the COVID restrictions are lifted.

Kilburn’s very own tin tabernacle is an incredibly rare survivor of a simple utilitarian building that could be found in cities, town and villages around the world in the nineteenth century. Of the hundreds that once stood in Great Britain, only a handful remain. William Morris would be horrified, but I couldn’t be happier.

To find out more about the tin tabernacles and the ugly, but utilitarian, buildings that housed an empire, see:

For more on Kilburn see:

Kilburn and Cricklewood (Images of London), by Marianne Colloms

Kilburn and West Hampstead Past, by Dick Weindling