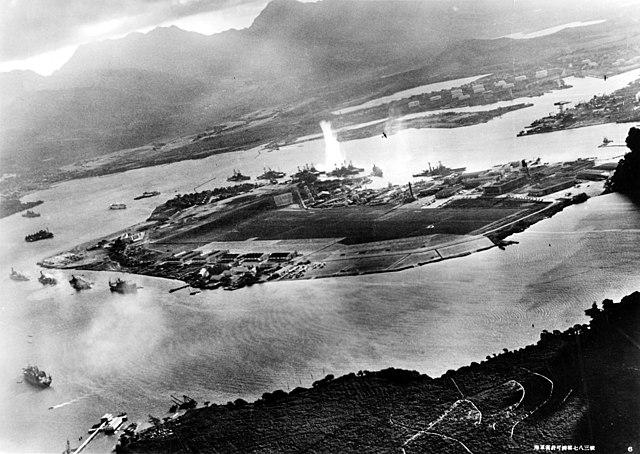 On the 78th anniversary of Pearl Harbor, our director, Mark Bielski, has two episodes on Pearl Harbor on his History with Mark Bielski podcast that you won’t want to miss!

Mark revisits his interview with historian Ron Drez. They discuss his book, Predicting Pearl Harbor: Billy Mitchell and the Path to War. General Billy Mitchell recognized the signs and foresaw the eventual showdown between the two nations―eighteen years before the tragedy of Pearl Harbor. Yet his predictions were dismissed out of hand. Mitchell’s attempts to have his theories taken seriously led to scorn and a subsequent court martialing.

On this week’s episode of History with Mark Bielski, Mark revisits his interview with historian Marty Morgan on “Conspiracy Theories: JFK and Pearl Harbor.” They discuss Lee Harvey Oswald, the new JFK documents that have been released and conspiracy theories that have revolved around the Pearl Harbor attack.

The above photograph was taken from a Japanese plane during the torpedo attack on ships moored on both sides of Ford Island shortly after the beginning of the Pearl Harbor attack. View looks about east, with the supply depot, submarine base and fuel tank farm in the right center distance. A torpedo has just hit USS West Virginia on the far side of Ford Island (center). Other battleships moored nearby are (from left): Nevada, Arizona, Tennessee (inboard of West Virginia), Oklahoma (torpedoed and listing) alongside Maryland, and California. On the near side of Ford Island, to the left, are light cruisers Detroit and Raleigh, target and training ship Utah and seaplane tender Tangier. Raleigh and Utah have been torpedoed, and Utah is listing sharply to port. Japanese planes are visible in the right center (over Ford Island) and over the Navy Yard at right. U.S. Navy planes on the seaplane ramp are on fire. Japanese writing in the lower right states that the photograph was reproduced by authorization of the Navy Ministry. Credit: Imperial Japanese Navy – Official U.S. Navy photograph