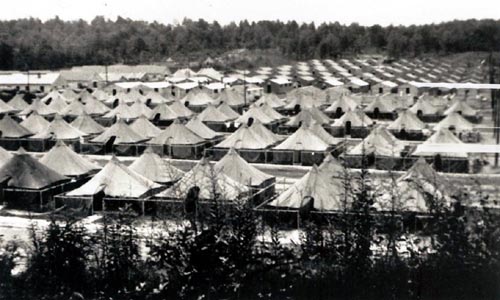 On our Original Band of Brothers® Tour, we begin our tour where the men of Easy Company began—at the training camp in Toccoa, Georgia. We visit the train station where recruits for the 506th first arrived, now the Currahee Military Museum. After viewing artifacts and memorabilia from Camp Toccoa, we travel to the site of the camp and then proceed up Mount Currahee, the 1,000 ft. mountain that the men of the 506th ran daily for training.

Read on to learn more about the fascinating history of the home of the Band of Brothers.

In July 1942, 5,000 men arrived at the remote training camp 5 miles outside of Toccoa, Georgia at Currahee Mountain for training as a new type of soldier – a paratrooper. Over the next few years 17,000 soldiers from 501st, 506th, 511th, and 517th Parachute Infantry Division (PID) trained at Camp Toccoa in preparation to defend the free world from the German offensive that was World War II.

Originally called Camp Toombs, named after Confederate Civil War General Toombs, the name was changed to Camp Toccoa after the camp commander pointed out the irony that arriving recruits walked Georgia Highway 12, passed the Toccoa Casket Company, marched through a cemetery and arrived at Camp Toombs to learn to jump out of an airplane.

It seemed fitting that Currahee was the name of the mountain at Camp Toccoa as it is an indian word for “Stands Alone” – significant that paratroopers do “stand alone” as they drop behind enemy lines. Today “Currahee” is the battle cry of the 506th Infantry Regiment.

Camp Toccoa subjected the young men who trained there with many rigorous physical challenges to help prepare them for battle. One notable event was the 115 mile march from Camp Toccoa, GA. on 12/1-3/1942, where they boarded trains for the remainder of the trip to Fort Benning. The four day hike was a challenge to best the Japanese record of a similar maneuver. The march was described by a 12/4/1942

The roads up Currahee Mountain remain as U.S. Forest Service roads and as a reminder of the quote from training soldiers, “3 Miles up, 3 Miles down”, as they used these roads for their hikes and runs.

In recent years Camp Toccoa has become a destination for historians, tour groups, reunions, and especially veterans returning to visit their “home” during training. Currahee Mountain is part of the Piedmont province and rises sharply about 800 feet above it’s surroundings and is the highest peak in Stephens County Georgia. Also adjacent to the Chattahoochee National Forest, Camp Toccoa has become a favorite place to camp, hike, horseback ride, sightseeing, and to run footraces following the footsteps of the soldiers run of “3 Miles up, 3 Miles down”.

In nearby Toccoa the Stephens County Historical Society maintains the Currahee Military Museum at the site of the old train depot where soldiers arrived before they made the five mile hike to Camp Toccoa. The Museum houses photos, documents and memorabilia of WWII including an actual stable that housed members of the PIR before and after D-Day.

Travel on our Original Band of Brothers® Tour>>