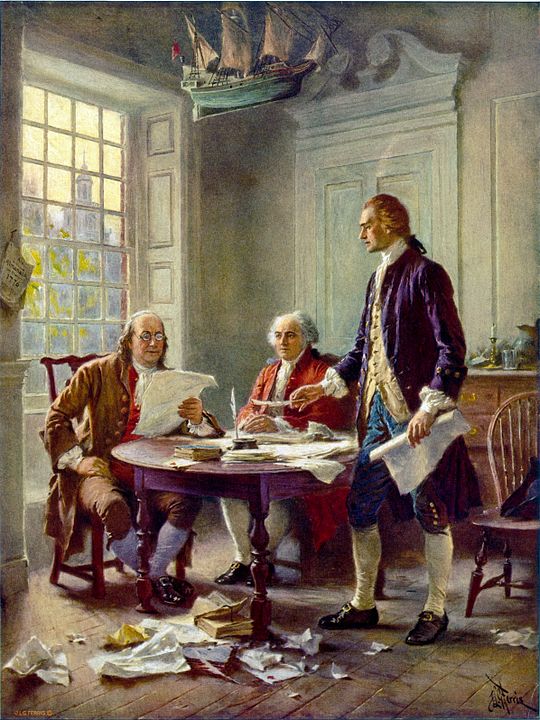 Perhaps the most momentous day in American history is Independence Day, which we celebrate on 4 July. Historians often will discuss turning points or defining moments for our country and elucidate their reasons: Cornwallis’ surrender at Yorktown, Gettysburg or the Civil War in general, and VE Day in WWII just to name a few. However, none of them would have occurred had it not been for the decision to declare independence from the British Crown. That one act made the rest possible.

There were 56 representatives to the Continental Congress from each of the thirteen colonies that were soon to be states. They signed in groups according to their state. Possibly the most well-known were Thomas Jefferson of Virginia, Benjamin Franklin of Pennsylvania, and John Adams of Massachusetts. The most unmistakable signature was that of John Hancock, also of Massachusetts, whose prominent flourish is front and center on the document.

Maryland’s Charles Carroll added “of Carrollton,” so that there was no mistake as to his identity.  He was also the last surviving signer, dying in 1832 at the age of ninety-five.

Not all the signatories lived to such an old age, nor did all of them fare well after declaring the colonies independent. Carter Braxton had his Virginia plantation and home ransacked by British soldiers. He also personally helped finance the Revolution and sponsored privateering against English shipping. He never recovered from the subsequent financial outlay. Button Gwinnett of Georgia led an unsuccessful attempt by his militia to invade Spanish Florida. He died in 1777 from wounds received in a duel with fellow Georgian Lachlan McIntosh.

The signers knew that the British would deem their action as treason, but each was prepared to make the sacrifice. Of the group, twenty-four were lawyers and jurists. Eleven were merchants or businessmen, and nine were farmers and large plantation owners. In general, they were prominent in their communities and well-to-do. They were also well educated and knew they had much to lose. Yet they signed the Declaration of Independence knowing full well that the penalty would be death if they were captured.

“Let the annual return of this day forever refresh our recollections of these rights, and an undiminished devotion to them.” — Thomas Jefferson

“They that can give up essential liberty to obtain a little temporary safety deserve neither liberty nor safety.” – Benjamin Franklin

“We must be unanimous; there must be no pulling different ways; we must hang together.” – John Hancock

“The dons, the bashaws, the grandees, the patricians, the sachems, the nabobs, call them by what names you please, sigh and groan and fret, and sometimes stamp and foam and curse, but all in vain. The decree is gone forth, and it cannot be recalled, that a more equal liberty than has prevailed in other parts of the earth must be established in America.” – John Adams

“… liberty will maintain her empire, till a dissoluteness of morals, luxury and venality shall have prepared the degenerate sons of some future age, to prefer their own mean lucre, ye bribes, and the smiles of corruption and arbitrary ministers, to patriotism…” Charles Carroll