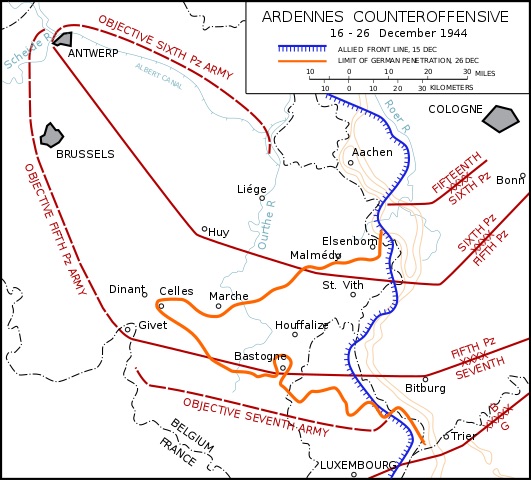 Historian Kevin Hymel recently joined host Bob Gould on Veterans Radio for a lively discussion of the Battle of the Bulge and Airborne military strategy.

It was December 16, 1944. The Allied front line extended 200 miles along the Belgium/Luxembourg border defended by the General Courtney Hodges’ First Army. Before dawn, the Germans launched a counterattack through the Ardennes forest, with Tiger, Panther, and Mark IV tanks. in hopes of splitting the Americans from their British allies. The attack created a “bulge” in the Allied line. The ultimate goal: capture the port city of Antwerp. But American bravery, ingenuity, and firepower ensured disaster for the Germans.

Listen to Kevin discuss the significant of this military battle>>

Travel to the Site of the Battle of the Bulge!

As Stephen E. Ambrose said, “The best way to understand history is to travel to the places where it was made.”

If you want to hear Kevin and our other professional historians share more stories about the men who fought during the Battle of the Bulge at the very place where they made history, travel with us on a D-Day to the Rhine or Band of Brothers tour.

Learn more about our D-Day to the Rhine Tour>>

Learn more about our Original Band of Brothers Tour>>