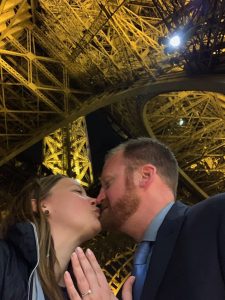 We are thrilled to share the happy news that two of our guests got engaged while traveling on our 75th Anniversary of D-Day Tour!

Shawn Morris used the occasion to ask Amanda Fonferek to marry him on their 9th anniversary of dating. The two met through mutual friends at an off-road race in 2010. Shawn, a former Marine, was a professional off-road racer at that time. Amanda has a photography company that specializes in extreme motorsports. They soon found that not only did they share a mutual love of racing, but also of history.

We were intrigued to find out more about why Shawn decided to pop the question then and what the special moment was like. We reached out to Shawn and Amanda to see if they would be willing to share the details with us and they graciously agreed to do so. Today, we share their sweet story with you.

Love Blossoms on the 75th Anniversary of D-Day

SAHT: Why did you decide to travel on the 75thAnniversary of D-Day Tour with Stephen Ambrose Historical Tours for your 9th anniversary of dating?

Amanda: It all started when Shawn retired from racing and he said we should go to Germany for Octoberfest. I began researching and found the cheapest flights from Colorado, where we live, were into Paris. I told Shawn if we were flying as far as Paris there was no way we weren’t adding a couple days and going to Normandy. We both really enjoy learning about war history. We watch a lot of war movies and documentaries and Band of Brothers and The Pacific are two of our favorites.

Shawn started Googling, and then one night he handed me his phone and told me to read the description for a tour he had just found being offered by Stephen Ambrose Historical Tours. 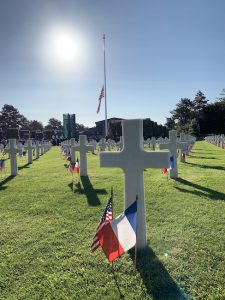 The next day he emailed SAHT and put our names on a waiting list for what turned out to be the 75th Anniversary of D-Day Tour. We assumed that there was no way we’d make it off the waiting list. But at the beginning of December Cheryl emailed to say we were in!

The 75th was a huge draw for us. Knowing that the men and women in the war were 16-22 years old, plus 75 years, meant that WWII veterans wouldn’t be around for the next major milestone years. We wanted the opportunity to pay our respects, honor those who were lost and those who survived, have the chance to hear their stories, and put ourselves in their footsteps before it was too late.

It was about this time that I started putting it together that the tour company was affiliated with Stephen Ambrose the author. I knew of his work, but I didn’t know that he had started a tour company.

SAHT: Shawn, how did you decide when and where to propose? 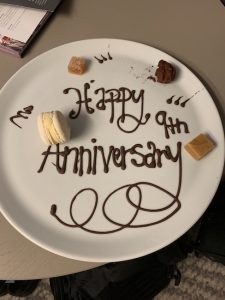 Shawn: Going into the trip I had studied the itinerary and was going to make the best of any spare moment we were given. Knowing we had a free night in Paris, I booked dinner at the restaurant at the Eiffel Tower back in March. It’s stupid expensive, but I figured the chances of us doing that a second time in life were pretty slim.

Our actual 9th anniversary was June 5th, but the 5th and the 6th had us on Omaha and Utah beaches, in the thick of Normandy, and at the 75th anniversary ceremony. We wanted to honor and respect those events on those days and chose not to acknowledge our anniversary publicly until the 7th, which was our free evening in Paris.

SAHT: Amanda, did you know that Shawn was going to propose to you before the tour?

Amanda: I knew we were going to dinner at the Eiffel Tower for our anniversary, but I didn’t know he was going to propose. Shawn said he wanted us to dress up, so I brought a nice dress and he brought a full suit. I look back now and think, Oh My Gosh, he had that ring across the world, in four different hotels and on shuttles, trains, buses and taxis! How he kept his cool about it and how I never found it in our luggage is still a mystery.

SAHT: Amanda, tell us about the moment when Shawn proposed. Did he get down on one knee?

Amanda: As we rolled into Paris on the bus, the tour guide proceeded to explain to us how you have to pay attention in Paris because of pick pockets. We checked into our room and got showered and dressed and then it began to rain and get very windy. But we weren’t going to let a little weather stop our once-in-a-lifetime dinner. We plotted our course, determined our metro locations and headed out. 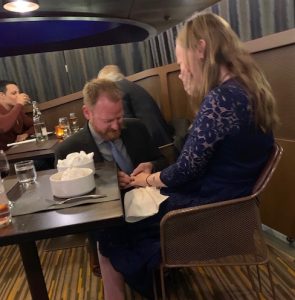 Shawn was super fidgety and always worried about where I was walking and standing. As we got on the metro we watched a gentleman right next to us almost get pick pocketed and a fight broke out in the train car. Shawn was freaking out and I couldn’t understand why he was so paranoid, that wasn’t like him.

We got to the Eiffel Tower and had to wait about an hour for our reservation so we had a gift shop beer and took about a million selfies! When we sat down for dinner it was just amazing. We ordered champagne and chatted with a couple next to us. A cheer erupted and I told Shawn that someone must have gotten engaged. During our dinner, there was another cheer from across the room. Shawn said, “another poor sap.” I laughed it off and excused myself to use the restroom. 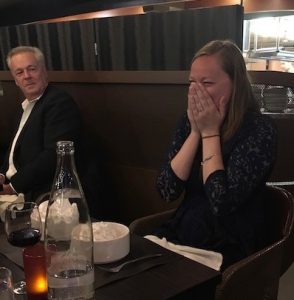 Shortly thereafter our desserts and more wine arrived. I immediately grabbed my spoon to dive into the delicious looking strawberry rhubarb sorbet and the waiter stopped me and said there was another part to my dessert and I had to wait and eat them together.

He scurried off and returned with another bowl like the one my sorbet was in. He lifted the cover, stepped aside and I saw Shawn down on one knee. There was a ring nestled into a napkin in the bowl. I started bawling and covering my face. Shawn said a whole bunch of super sweet things that I can’t remember due to the shock. I know I said yes and we hugged and kissed. Everyone around us started clapping, and thankfully the couple next to us took photos. We eventually finished dessert, took more photos, and navigated the metro back towards the hotel.

SAHT: Tell us about your engagement ring.

Amanda: The night before we flew out for London, I left work before Shawn to go home and pack. He arrived home fairly late, and I was getting worried and annoyed that he wasn’t leaving enough time for himself to pack. He said he had stopped at a friend’s house. Turns out he actually turned his phone off and drove out to the jewelry store to pick up the ring he had picked out a couple days prior. 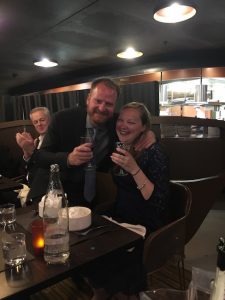 We have been together for nine years so I was hopeful that someday we would get engaged but at the same point, life just keeps marching on. We live life like we are married. I had made an Amazon wishlist of rings that Shawn had access to, so he knew what style and coloring and sizing I liked. He took the list to the jewelry store and picked out something similar but unique. I love that he picked out the ring himself, it means that much more to me.

SAHT: When did you share the happy news with your fellow travelers and family?

Amanda: The next morning outside the hotel, Shawn told our tour manager Matt. He asked permission to share the news and announced it on the bus to our whole group. It was kind of sweet to have the remainder of the trip disconnected from majority of everyone we knew back in the States and to be able to just enjoy the engagement by ourselves (and 37 of our new traveling friends, LOL). 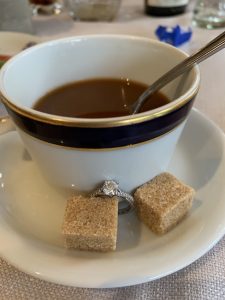 Shawn: The next night we were in the Netherlands and the hotel had excellent WiFi so we were able to FaceTime Amanda’s parents, my dad and stepmom, my sister, and Amanda’s best friend. The following night we did a mini photo shoot at dinner where we hid the ring in all our food and drink and used that as a way to announce on social media that we got engaged. We did the old “the food here in Europe has been amazing” and waited for people to see it. By the end of the trip the married guests were passing on their marriage advice and wishing us the best of luck in our future.

SAHT: So when’s the big day?

Amanda: Oh, that is the million-dollar question. We are tossing around a couple ideas, weighing some pros and cons, and looking at dates. After nine years together we aren’t in a giant rush.

SAHT: We are fans of this wedding plan! Do you have anything else you’d like to share with us? 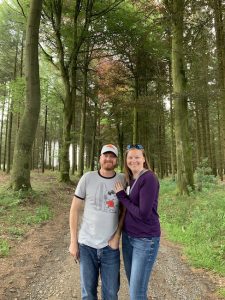 Amanda: Shawn and I would just like to take a moment to thank all the staff at SAHT for an amazing experience. Touring Europe and taking in all the history and getting to pay our respects to the people and the events around World War II was a once-in-a-lifetime experience for us. Getting engaged at the top of the Eiffel Tower in Paris was a dream and SAHT allowed that dream to come true! Special thanks to our tour historian Ed, tour manager Matt, bus driver Harry, and all the guests who we shared our adventure with!

SAHT: Thanks for sharing your wonderful story and photos with us. All of us at Stephen Ambrose Historical Tours wish you both the very best!