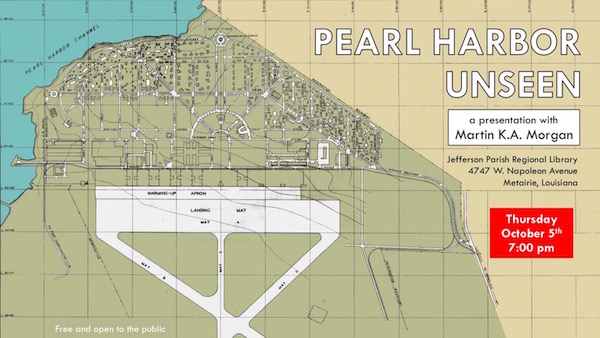 We are excited to announce that our historian Martin K.A. Morgan will be giving a lecture at Jefferson Parish Regional Public Library in Metairie, LA this Thursday entitled, “Pearl Harbor Unseen.”

“Pearl Harbor Unseen” relates to piece of original color footage from the December 7, 1941 attack on Pearl Harbor that was filmed by a U.S. Army soldier and his wife. This footage has never been seen in public before and captures the aftermath of the Japanese attacks on battleship row and Hickam Army Airfield. This is an episode of Pearl Harbor history that was obscured by the passage of time but that nevertheless offers a unique insight into the experience of surviving December 7th.

Marty Morgan is one of our historians on our D-Day to the Rhine Tour and Iwo Jima: War in the Pacific Tour. He is the author of Down To Earth: The 507th Parachute Infantry Regiment in Normandy and The Americans on D-Day: A Photographic History of the Normandy Invasion. He contributes frequently to World War II Quarterly, Shooting Illustrated and The American Rifleman and has also contributed to Aviation History, World War II, World War II History, and Armchair General. Marty has appeared regularly on Discovery, National Geographic, History, The Smithsonian Channel, and The Military Channel/The American Heroes Channel as an expert on subjects ranging from D-Day to Pearl Harbor to how whiskey, Christmas, and chocolate changed history.

The lecture is free & open to the public!