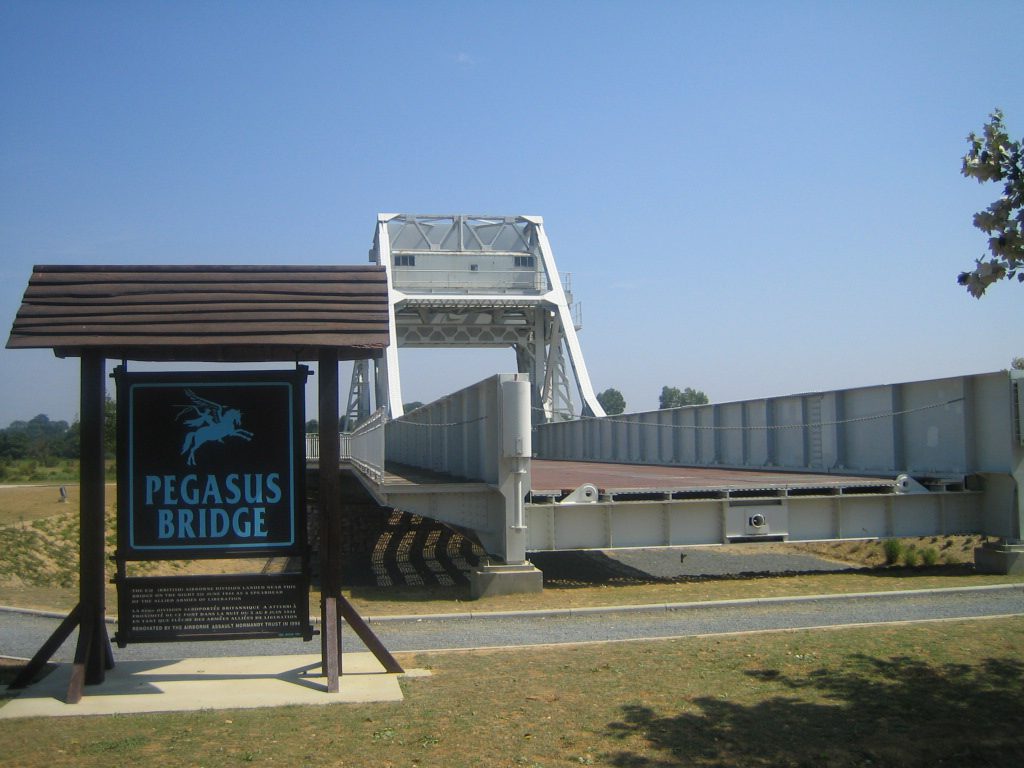 One of the interesting places we stop on our D-Day to the Rhine and Operation Overlord tours is the Memorial Pegasus museum in Ranville, France, the location of Pegasus Bridge, the major objective of the British airborne troops during the D-Day Invasion. Ranville was also the first French village liberated on D-Day and is a commune in the Calvados department in Normandy. So, our guests not only get to learn about the significance of this bridge and town in D-Day history, but they also get to enjoy a glass of Calvados!

Inaugurated on June 4th 2000 by HRH the Prince of Wales, the Memorial Pegasus is dedicated to the men of 6th Airborne Division and their role during the Battle of Normandy from June to September 1944. The museum was designed and constructed within a few months by the D-Day Commemoration Committee presided by Admiral Brac de la Perrière.

Guided visits, within a thematically laid out exhibition hall, enable the visitors to discover the missions of the division. Missions carried out before the seaborne landings on the beaches in June 1944, “The Longest Day.” Hundreds of historical objects and photos of the era are presented in the museum.

The original Bénouville Bridge, renamed Pegasus Bridge after the liberation, is on display in the park of the museum along with a Bailey bridge and a full size copy of a wartime Horsa glider (the only time gliders were used in combat was during the Second World War).

The collection is constantly increasing in size and the historical relevancy to 6th Airborne Division is carefully controlled by the British Airborne Assault Normandy Trust.

The Memorial Pegasus is dedicated to the men of 6th British Airborne Division, “the Red Berets.” The missions for the division on June 6th 1944 are presented in the museum.

The division, commanded by Major General Richard Gale, was composed of parachutists and glider borne troops being transported in Horsa or Hamilcar gliders.

The division had to hold the eastern flank of the invasion forces and to stop German counter attacks coming from the east. This mission was carried out in three ways :

These missions were accomplished with great success before dawn on D-Day but with heavy losses. More than 2000 soldiers lie in peace at the Commonwealth War Graves cemetery at Ranville several kilometres from the museum.

Pegasus Bridge – The Bridge of the Longest Day

The capture of the River Orne bridge at Ranville and the bridge across the Caen Canal at Bénouville is the most famous mission of the airborne division. 180 troops of the Ox and Bucks Light Infantry, commanded by Major John Howard, captured the bridges after landing in Horsa gliders only meters from their objectives.

In less than ten minutes both bridges had been captured intact. The sea borne reinforcements commanded by Brigadier Lord Lovat, preceded by his bagpiper Bill Millin, were able to cross the waterways to reinforce 6th Airborne Division on the eastern flank. Among these Green Berets, 177 French Commandos commanded by Philip Kieffer.

On June 26th 1944, the Caen Canal bridge was baptized Pegasus Bridge as a tribute to the British troops. Pegasus, the winged horse, was the emblem worn on the sleeves of the men of the airborne division. The insignia was chosen by the author Daphne du Maurier, wife of the wartime commander of British airborne forces General Sir Frederick Browning.

In 1961 the bridge acquired celebrity status due to the D-Day film, produced by Darryl Zanuck, The Longest Day.

Replaced in 1994 by a new bridge, the original Pegasus Bridge is now on display in the park of the museum.

As an interesting side note, in the 80s, when Stephen Ambrose was still leading the D-Day to the Rhine tour, quite by chance, British Major John Howard happened to overhear him speaking to his group on Pegasus Bridge. Howard followed the guests back to the bus, where he got on and announced, “Perhaps I can add something. I’m John Howard.”

There is a wealth of historical information on the Memorial Pegasus website, including the historical significance of the Bailey Bridge and the Horsa Glider. But as they say, there is nothing like being there. In addition to the museum’s permanent exhibits, including an actual Horsa Glider, there are rotating exhibits like the The Fallen Heroes of Normandy, an interactive experience of information, both photographic and documentation, about troops killed on D-Day and during the Battle of Normandy. We hope you will join us on one of our D-Day tours soon!

Check out our D-Day to the Rhine itinerary.

Check out our Operation Overlord itinerary.