Must-Watch Video: From the Ballpark to the Battlefield: Baseball and WWII | Stephen Ambrose Historical Tours 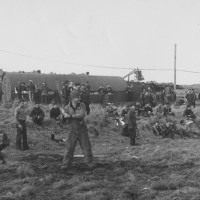 More than 4,500 major and minor leaguers fought in WWII. Baseball greats like Ted Williams, Bob Feller, Joe DiMaggio and Warren Spahn were among the men who traded one uniform for another.

Their amazing stories are told in the Fox News show, War Stories with Oliver North: From the Ballpark to the Battlefield: Baseball and WWII. The show’s coverage of this little talked about chapter in WWII history is absolutely fascinating.

While many of these guys are now gone, you can learn all about these men on our Baseball Goes to War Tour next summer. Three fantastic historians and authors will be leading this tour, including Todd Anton, Gary Bedingfield and Bill Nowlin. Todd and Bill co-wrote When Baseball Went to War and Todd also appears in the Fox News show, which you can watch in its entirety here:

War Stories with Oliver North: From the Ballpark to the Battlefield: Baseball and WWII

They will share the personal stories of these players at some of the most important sites in WWII, among them Sainte-Mère-Église, Omaha Beach, Utah Beach, and the American Cemetery in Hamm and Bastogne.

Read all about this fascinating tour, which will run from July 15-28, 2016, download the itinerary, and book your spot online.