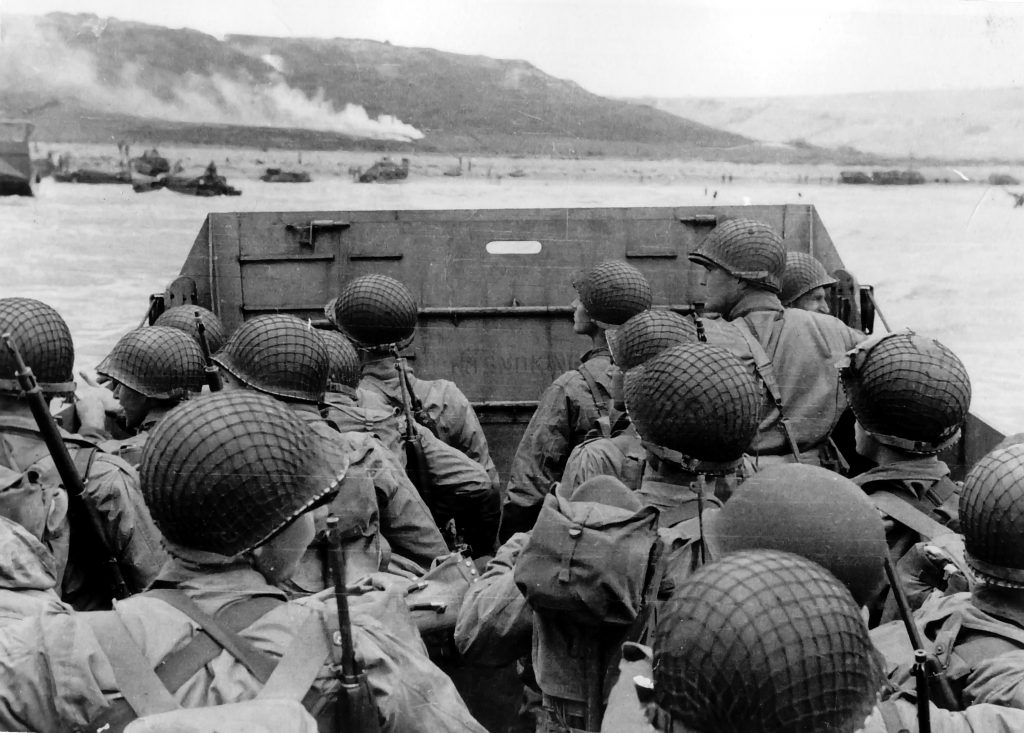 Historian Kevin M. Hymel’s article, “Last Man In Hell: A Navy Beachmaster on Omaha Beach,” was originally published in WWII Magazine and posted on Warfare History Network on January 23, 2017. It is a gripping account of Beachmaster Robert L. Watson’s 28 days on Omaha Beach during the D-Day invasion. Kevin, who is the historian for the United States Air Force Chaplain Corps, leads D-Day tours for Stephen Ambrose Historical Tours, which includes visits to Omaha Beach and Normandy. He is also the historian for the In Patton’s Footsteps Tour and the author of Patton’s Photographs: War as He Saw It.

On our tours, you will hear Kevin (and all of our historians) tell these stories of America’s heroes at the very places where the action occurred. These harrowing tales of bravery and courage capture moments in time and add a personal dimension to our tours that no other WWII or D-Day tour company can offer.

Last Man In Hell: A Navy Beachmaster on Omaha Beach

The Landing Craft Mechanized (LCM) carrying Army engineers and Navy beachmasters hit a mine on its way into Omaha Beach. The explosion rocked the craft, killing the men in the front and tossing others into the water. Beachmaster Robert L. Watson flew backward into the air, cutting his left leg on the LCM’s bulwark before plunging into the freezing water.

The saltwater stung his wounds. The 60 pounds of equipment on his back pulled him into the depths, but he quickly inflated the lifebelt around his chest and popped to the surface. “I’m in shock,” recalled Watson, “and I’m scared to death.” It was early morning on D-Day, June 6, 1944, and he could not tell which of the other men bobbing in the water was alive or dead. Worse, he knew that other landing craft were not allowed to stop and pick up survivors.

“I thought I was the last man in hell,” he recalled.

Watson soon spotted a Landing Craft Vehicle Personnel (LCVP) headed straight for him. He screamed at the coxswain, “Hey! Stop! Hey! I’m over here!” The craft slowed long enough for him to grab a rope drooping from the side. He clung to the side of the craft with one hand, gagging as salt water splashed his face. His new ride dragged him all the way to the beach, tearing the skin off his hands in the process.

Watson let go of the rope about 40 yards from the beach in shallow water. He found a nightmare. German artillery shells exploded on the beach while machine-gun fire stitched the sand. Sherman tanks burned on the water line and half-sunk landing craft bobbed in the water, red with blood. The dead and body parts littered the beach.

Watson crawled on his hands and knees up the beach, his uniform in tatters but his helmet still on. “Bob, get your head together,” he told himself and kept repeating, “I don’t want to die here, I don’t want to die here.” Once out of the water, he pulled his bolt-action Springfield rifle from its protective plastic bag.

Watson then crawled up to an Army medic who had lost everything but the strings of morphine syrettes he wore around his neck. He gave Watson one and, shouting over the din of battle, told him, “Just give it to a medic.” Watson, in return, fished some sulfa powder and pressure bandages from his first aid kit and handed them to the medic. Watson climbed farther up the beach, over dead and wounded Americans, and removed all the first aid kits he could find, throwing them back to the medic.

Watson had arrived an hour into the battle. Companies E and F of Colonel George Taylor’s 16th Infantry Regiment, 1st Infantry Division had landed on Fox Green and Easy Red Beaches opposite the Colleville Draw and encountered a slaughter. The Germans defended either side of the draw with two major defensive positions, Widerstandsnests (WN) 61 and 62. On Watson’s left, WN 61 stood low to the beach firing an 88mm cannon from a concrete bunker. On his right, WN 62 stood atop a hill dominating the area with its 75mm cannon.

Although some heavy guns had been knocked out before Watson arrived, enemy artillery, mortars, machine guns, and sniper fire rained onto the beach. Many American soldiers were killed as they charged out of their landing craft. Some never made it out. Those who survived struggled up the beach, exhausted and weighted down by equipment and soaking wet uniforms. Many more were cut down. Almost all the officers in F Company were either killed or wounded.

Watson continued up the beach until he met an Army captain who ordered him to the firing line. Watson pointed at his helmet, which bore the distinct Navy orange crescent and a black number six on the front and gray band around the base, identifying him as a Navy beachmaster. The captain was unimpressed. “Get your ass up there or I’ll blow your head off!” he demanded.

“Where the Hell is Pearl Harbor?”

The carnage of ground combat had been the farthest thing from Bobby Watson’s mind some 21/2 years earlier as he trimmed rose bushes in a garden with his father across the street from their Lynn, Massachusetts, home. Watson’s mother interrupted their work when she called out from their house to come listen to the radio. They rushed inside to hear that Pearl Harbor had been attacked. Like so many Americans, Watson’s first thought was, “Where the hell is Pearl Harbor?”

Watson, a 17-year-old student at English High School, was working as the head usher at the local movie theater when the country went to war. As the months passed, he spent his time watching war newsreels, seeing bayonet charges, weapons firing, and men getting killed. When his draft notice arrived in July 1943, he decided to join the U.S. Navy, where he figured he would get three hot meals a day and sleep on a bed. He realized that in the Army and Marine Corps, “You can’t get a deal like that.” But before he left, he watched his last movie, Humphrey Bogart’s Casablanca.

Watson joined the Navy at the Newport Naval Station, Rhode Island. After six weeks of training, he and his fellow draftees were declared sailors. Upon graduation, the new swabbies lined up in front of their barracks and an officer offered them two options: men less than six feet in height were offered the submarine service; everyone else was offered the Naval Armed Guard.

The next day, the men entered a large auditorium where they were assigned to outgoing units. Watson did not like his chances for a good assignment. “You know if your name ends with W, X, Y, and Z, you’re in a world of hurt.”

When the officer calling names finally reached the letter W, he called out, “Six-man draft of the 6th Naval Beach Battalion, Camp Bradford, Virginia, amphibious training station! About face!” Watson and five other sailors headed off to their new school. When he asked the coxswain in charge where they were going, the coxswain said, “You got it made! You’re gonna be a gator! You’re gonna crawl out of the water and onto the beach.”

Visit Omaha Beach on our D-Day to the Rhine Tour>>