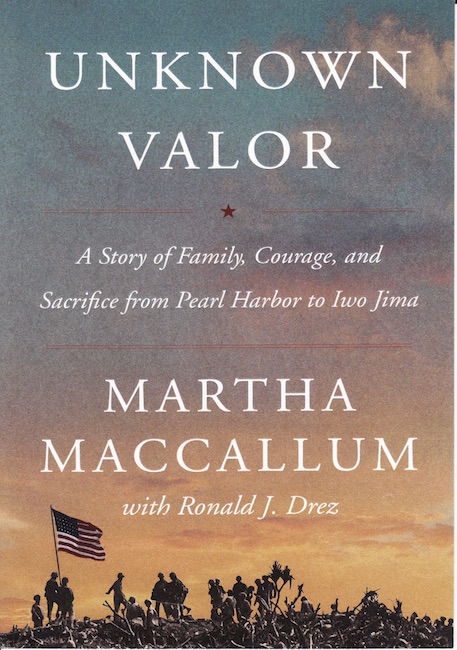 We are excited to announce the book launch for Unknown Valor: A Story of Family, Courage, and Sacrifice from Pearl Harbor to Iwo Jima. The book was written by Martha MacCallum, a news anchor for Fox News, with our chief historian Ronald J. Drez. We’d like to congratulate Martha and Ron on this important new work which is already #1 on Amazon!

This is Ron’s tenth book. His others have covered topics from Pearl Harbor to D-Day to the War of 1812. You can read about all of them – and order signed copies – on his website:

Read on to learn more about Unknown Valor from Ron himself.

The book launch for Martha MacCallum’s new book, Untold Valor, is in New York on February 13, 2020 at the University Club, and there is to be a television special at a later date. It was my happy task to co-author this work.

I researched and wrote with Martha – who is just a delightful person – for over a year. She joined me on our tour to the Pacific in 2019, along with her producer and camera man as we explored Saipan, Tinian, Guam, and Iwo Jima. I was able to take her to the exact spot on Iwo where her uncle, just 18 at the time, was killed — almost on the last day.

It also presented me with a wonderful opportunity to again meld the stories of two of my dearest friends and heroes, into this latest story. James Russell (Tarawa and Saipan), and Jay Rebstock (Iwo Jima), now both deceased, are again very much a part of this new story that features the Pacific war, but with periodic glimpses into life at home. It follows the parallel history of the Marines’ Central Drive, and the maturing and eventual heartbreaking death of Martha’s uncle, 18-year-old Private Harry Gray.

I had featured Russell and Rebstock initially in my book, Twenty-Five Yards of War, and it was great to have them appear again in this latest important work. But it was necessary to not have this new work begin and end with just another story on Iwo Jima.

To make this wonderful story most compelling, it had to begin at the beginning, at Pearl Harbor and then, island hop to the bitter end — as historians Clive Howard and Joe Whitley famously described, “One Damned Island After Another.”

This was a labor of love for me. To cap it all off, Martha MacCallum will broadcast her show “The Story” along with me from the USS Kidd veterans memorial in Baton Rouge at 6PM on March 9. A book signing will be held after the show around 7:30 PM at the Barnes & Noble store on LSU campus.

For all of you who are nearby, come and join us.

As Ron noted, last year Martha traveled with Stephen Ambrose Historical Tours to Guam and Iwo Jima to research WWII for Unknown Valor. When she returned, she did a segment on Fox News, where she shared her images from that trip.