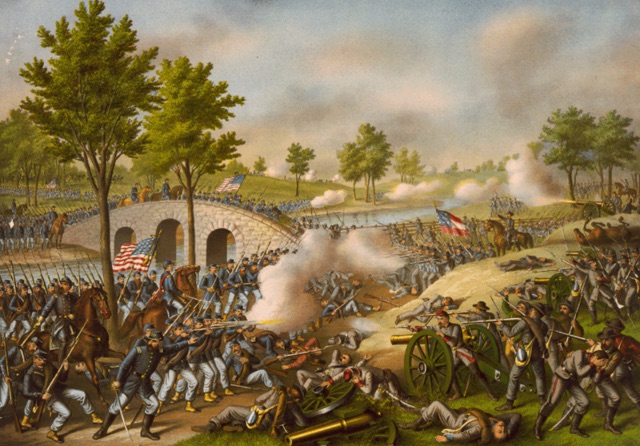 Our Civil War historian Mark Bielski dives into the American Civil War on the most recent episodes of History with Mark Bielski. (Photo: Battle of Antietam painting)

Gerry Prokopowicz joins Mark to discuss the events leading up to the Battle of Antietam in September 1862. They cover the Second Battle of Manassas (Bull Run) that August, Robert E. Lee’s reasons for taking the Army of Northern Virginia into Maryland and the beginning of the battle.

Gerry is one of our historians who leads the Civil War: This Hallowed Ground Tour.

Gerry Prokopowicz returns to discuss the battle, its consequences and aftermath and the response from both sides. They include Abraham Lincoln’s writing the Emancipation Proclamation.

Mark takes a comparative look at developments leading up to the Civil War and the importance of the city of New Orleans to the Confederacy.

Listen to History with Mark Bielski.

Subscribe to the History with Mark Bielski podcast on iTunes or Google Play.

Mark Bielski is an historian, author, and the director at Stephen Ambrose Historical Tours. He is the author of Sons of the White Eagle in the American Civil War: Divided Poles in a Divided Nation. He also hosts the History with Mark Bielski podcast, where he and his guests, experts in their field of study, delve into the characters, backstories and often the intrigues that drove events throughout history.

As the Director at Stephen Ambrose Historical Tours, he is involved in business and educational development, historical guiding, lecturing and itinerary design for tours that primarily involve World War II in Europe and the American Civil War.

Learn more about Mark Bielski’s books and podcast on his website.

Travel with Mark or Gerry on a 2018 Civil War Tour

You can join Mark Bielski and Gerry Prokopowicz on a Civil War Tour in 2018. Please call the office at 888.903.3329 to find out which tours and dates they will be leading.

Learn more about our Civil War: This Hallowed Ground Tour.

Learn more about our Civil War: War on the Rivers, Rails and Mountains.