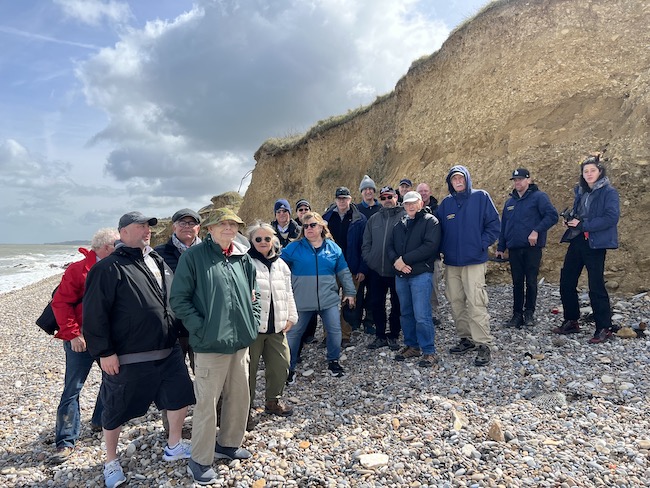 Senior Historian Chris Anderson recently returned from Stephen Ambrose Historical Tours’ inaugural Normandy Master Class: a week-long intensive study of the D-Day landings. He was joined by three other historians and 17 wonderful guests. Based on an email that one guest, Doctor Homer Hodge, a Silver Star recipient, sent to us, it was a hit! Read on to learn more about the Master Class experience and let us know if you’d be interested in joining us next year.

For a Stephen Ambrose historian, twenty-nine months is a long time to be away from Normandy. It is like a second home to me but, because of the COVID pandemic, I had not had a chance to visit since November 2019. It was with some excitement, and not a little trepidation, that I recently made my first trip back to the D-Day beaches. I was a little apprehensive before the trip that pandemic restrictions would have changed my favorite part of France for the worse. I needn’t have worried. As soon as I landed at the ferry terminal in Caen and smoothly passed through immigration, I knew that everything would be okay. 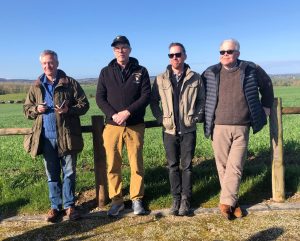 I was in Normandy with three other historians and 17 wonderful friends for Stephen Ambrose Historical Tours’ inaugural Normandy Master Class: a week-long intensive study of the D-Day landings. No ordinary Normandy tour, this would be an intensive eight-day immersive visit into the Allied landings on June 6, 1944. The idea for Master Class came during the darkest days of the lockdown when I had been dreaming of Normandy. “Wouldn’t it be terrific,” I thought, “if I could get back to the landing beaches for a few days with friends. We’d study before the trip and then really focus on what happened in June 1944 as we walked the ground. Just like the old days. It would be magic.”

As any SAHT guest knows, nothing can replace standing where history happened. Having been locked down for so long, there were lots of things I had dug up as I read my way through the pandemic that I was anxious to see for the first time. I also knew that if I ever got back to Normandy, I’d probably be a little rusty on some of the basics. Out of these thoughts came the idea for the “Master Class.” At first, it was really nothing more than exchanging e-mails with some fellow historians about things we’d been reading or things we wanted to see and do when we finally got back to France.

During the winter of 2021, when it looked like some travel restrictions might finally be lifting, the office encouraged me to reach out to some of our most knowledgeable historians to see if they would like to make a quick trip to Normandy during the off season for a bit of a refresher. I did and was happy when four of my colleagues readily agreed.

As time would be short, it was agreed that each of us would take the lead in studying a particular beach or topic and that once we were all on the ground that person would act as our guide and historian. We would spend time visiting places we ordinarily did not get to see on tours as well as revisiting some of our favorite stops. As our resident British historian Hugh MacDonald-Buchanan focused on Sword and Gold beaches. My good friend, and History Happy Hour co-host, Rick Beyer did a deep dive on the 1st Infantry Division and the Americans at Falaise, Fort Lewis Museum director Erik Flint took the lead on the 2nd and 5th Ranger battalions and SAHT’s newest historian, Matt Broggie, helped us with the 29th Division at Omaha and the Utah Beach landings. My assignment was to discuss operations of the 6th British Airborne division, the Canadians at Juno beach and my beloved E/506-the “Band of Brothers.”

After a break of so long, it was fantastic to be picking over all the details of Operation Overlord again. It was like seeing it with fresh eyes. But there was still something missing. One of the things I love so much about my job is sharing what I have learned with interested folks. One of the things I have missed so much during the lockdown is spending time with some of SAHT’s wonderful guests-many of whom have become very close friends. Suddenly it dawned on me that there was a solution to this, we would invite a select few of our friends to join the historians as we returned to Normandy. Master Class was officially a “thing.”

After a few days in London and Portsmouth, Matt, Rick, and I traveled to France on April 3. Unfortunately, Erik, who is still on active duty with the Army was unable to join us. As soon as we arrived in Caen, we met the 17 guests who had decided to join our inaugural master class. It was so good to be back on a bus with a group. We spend the first afternoon discussing the landings of the 6th British Airborne Division in some detail before heading to our hotel in Bayeux. Hugh joined us that evening. 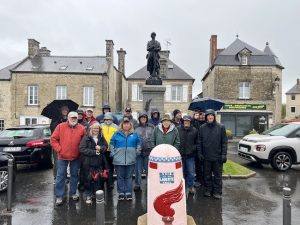 The next week was spectacular. We hit the ground running and had a full day on each beach, with each historian taking it in turn to explain in detail what happened. In all my years of travelling to Normandy it is the first time we have been able to do this with a group. Everyone seemed to enjoy themselves and get into the spirit of things. I get a smile on my face when I think of Normandy first timer Susan Havey exclaiming, “I can’t wait to explain what the shingle is to my siblings!” And another guest who said, “I never realized what a unified operation it all was. So much more than just the American beaches.”

There were so many highlights for me, among them were finally getting inside the Hillman Redoubt, the incredibly well-preserved German bunker system that dominated Sword Beach, the opportunity to spend a full day looking at Juno Beach finishing up to the Canadian cemetery at Beny-sur-Mer, following in the footsteps of Victoria Cross winner Stan Hollis at Gold Beach, walking Omaha Beach from Easy Green to Fox Green beach, Matt’s discussion of Utah Beach and, after the downpour, warming up with a glass of Brecourt Manor calvados with my dear friend Charles de Vallavielle. Finally, each evening after dinner, the guests could join the historians for an open discussion on ANY World War II topic you could think of. It was wonderful!

It was also gratifying to hear that our guests seemed to get a good deal out of the master class experience as well. Doctor Homer Hodge, a Silver Star recipient who during our discussions added greatly to my understanding of men in combat had this to say,

“Over the past almost 50 years I’ve attended many battlefield tours, including five times to the Normandy D-Day battle sites. The Historian Masterclass Normandy 2022 was my first with SAHT and it was by far the most thorough and informative tour I’ve ever attended. The four historians who led the tour – Chris, Rick, Matt, and Hugh – were exceptionally knowledgeable and their delivery in lectures and discussion was superb. Before taking this tour I considered myself very well acquainted with the D-Day operations, but I still learned additional details and assessments from our expert historians.

I hope there will be more SAHT tours in the Historian Masterclass format led by your fine historians. I would especially like to attend another one in that format that focuses on the post-D-Day battles of the Normandy Campaign fought by all the Allies and, of course, the German enemy.

Thank you for a wonderful experience.

Want to Join Us on a Master Class?

Having the opportunity to spend dedicated time on one specific battle with such a fantastic group of historians and friends was a wonderful, and worthwhile experience. I can safely say that it was one of the best Normandy tours I have ever been involved in. We are hoping to expand the master class idea in future and as schedules permit, create similar trips. I’d very much like to see our next master class focus in on the American battles that took place June 7-August 30, 1944. We’ll have to see. If the master class idea is something that appeals to you or if you have any further questions, thoughts, or ideas, please let the folks in the office know.

I hope to see some of you on a battlefield again very soon!