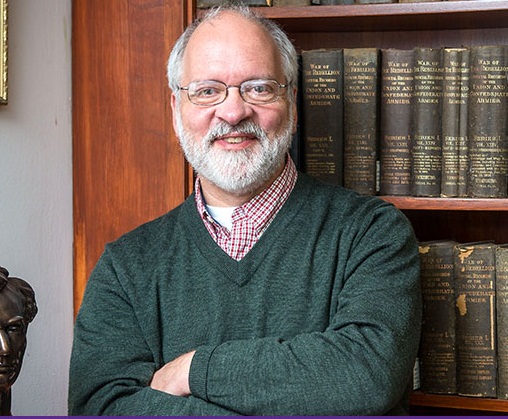 As it was when Dr. Ambrose was leading the D-Day to the Rhine Tour in the 1970s, we have only the most qualified historians lead our historical and WWII tours. Whether it is the history of WWII, the Civil War or Lewis and Clark, our historians are leaders in their field and world-renowned authors. They are also dedicated to making history come alive even when they are not leading tours – giving lectures, being interviewed, writing books, advocating for veterans.

Here’s a look at what some of our historians are have been up to when not on tour.

Dr. Gerry Prokopowicz (photo above), who leads our Civil War: This Hallowed Ground Tour, is the host of Civil War Talk Radio. A history professor at East Carolina University, he has been recording his live, hourlong weekly podcast for 15 seasons. Gerry was recently featured in a piece by the East Carolina University News Services, “Talking War History.” It’s a wonderful interview with him as he reflects on Civil War Talk Radio as it nears it’s 500th episode.

Civil War Talk Radio is produced by the Internet radio station Voice America and airs live every Wednesday at 7 p.m. EST. If you haven’t tuned in, you are missing out!

Chris was recently interviewed in the Greenville News about our Original Band of Brothers Tour. As he says in the article, “What makes this tour so unique is the amount of time I spent with the men of Easy Company. They were very dear friends and the tour is the product of the relationships I had with many of the original men of the company and the trips I made with them back to their battlefields.” Read on to hear Chris’s behind the scenes story of out Band of Brothers Tour, the Original!

Rick Beyer, who leads our Ghost Army of WWII Tour, has been hard at work, lobbying Congress to award the Ghost Army the Congressional Gold Medal. Every voice, including yours, must be heard by the end of the year or the push begins anew. But how to go about it? Rick has a page on his Ghost Army Legacy Project website that will walk you through the very easy steps about how to reach out to your representatives.