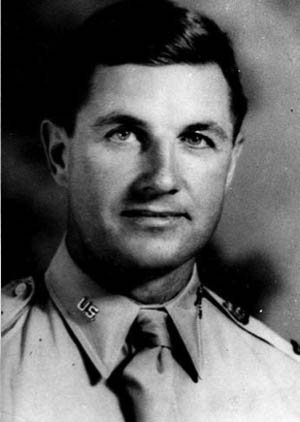 To Colonel Edson Raff, jumping out of a plane was ‘like getting out of the bed in the morning.’ So why was he commanding a tank regiment on D-Day?

America’s most experienced paratrooper, Raff earned his jump wings while the airborne battalions were still being formed. He commanded the Allied landings in North Africa in 1942, the first airborne operation of World War II.

As commander of the 2nd Battalion, 503rd Parachute Infantry, he was a tenacious and tough disciplinarian; his men considered him fearless and aggressive. His hard-charging personality and success on the battlefield was enough to earn him the nickname “Little Caesar” by some of his men. William Yarboro, one of his officers, called him “a human dynamo” who “just wanted Nazi hides.”

So why in the world was Raff commanding a tank regiment on the day of the Normandy Invasion?

To understand Raff’s bizarre role in the D-Day landings, it’s important to note the events leading up to the invasion. During Raff’s second parachute drop in the war, he clashed often with British General Kenneth Anderson. Eventually, Raff’s defiance of Anderson became a hallmark of his personality. He cared little for superiors who didn’t share his vision of attack.

This bitter attitude also extended to Maj. Gen. Matthew Ridgway. After a disagreement about paratrooper deployments, Raff blew up and accused Ridgway of surrounding himself with yes men; Ridgway, in turn, immediately disliked Raff and his brusque mannerisms.

Prior to D-Day, Ridgway was busy preparing the 82nd Airborne for its future role at Utah Beach. The invasion plan called for 82nd and 101st Airborne Divisions to parachute into Normandy at midnight: their mission was to secure vital bridges and roads and to wreak as much havoc in the enemy’s rear as possible. But in the midst of the confusion, the U.S. 4th Infantry Division was to assault the beach and push inland to link up with the two airborne units.

However, Ridgway knew that once his lightly armed paratroops captured the nearby towns, the Germans would try to retake them. He knew he needed big guns and armor to hold the town.

So, Ridgway put Raff in command of an armored task force and ordered him to hit the beach and race for Ste. Mère Église, where he would give the paratroopers the extra punch they’d need. He was also to secure an open field designated Landing Zone W, where a flight of American gliders were to secure the airfield and protect it from German crossfire.

Raff was pissed. He called Ridgway a “conceited, self-centered narcissistic man,” who had almost no use for him. “God help us if we get into combat under him,” he said later.

But was Ridgway putting Raff in charge of the armored force as a punishment, like Raff suspected? Or was it something else?

Travel to the Beaches of Normandy and Beyond

Following are some of the tours that will take you to the beaches of Normandy and beyond to sites like the Battle of the Bulge, where our expert historians will share some of the lesser known stories of D-Day and WWII and the men who fought for our freedom.

D-Day to the Rhine>>

The Original Band of Brothers Tour>>