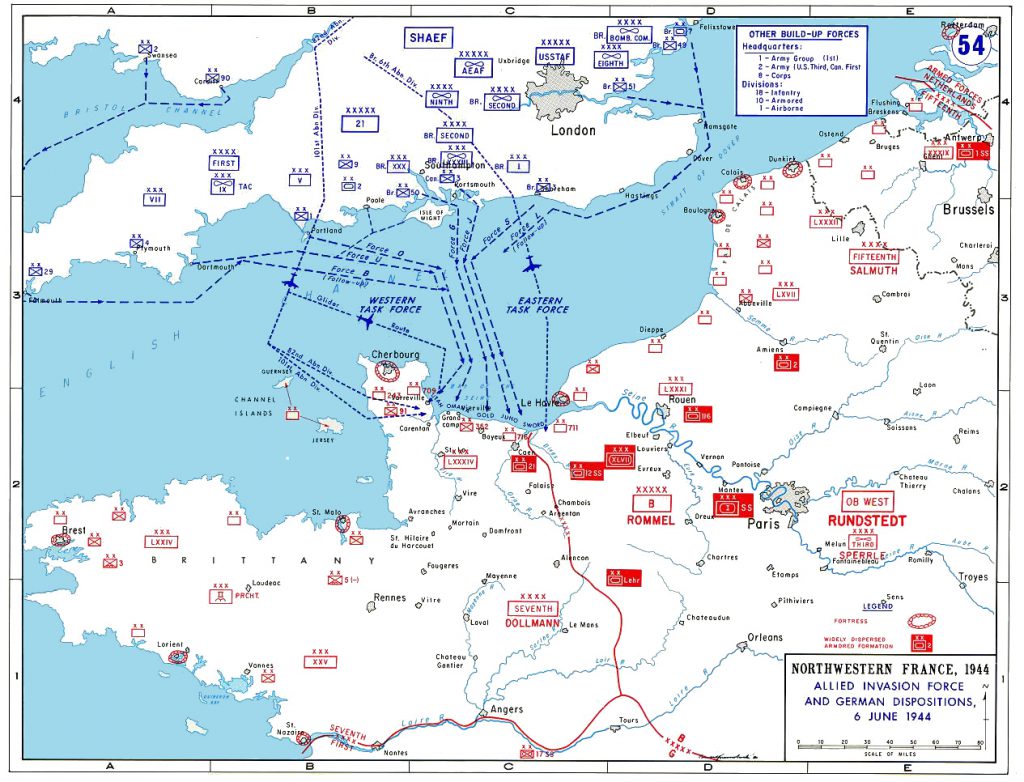 In Part I of our series on Operation Overlord, the code name for the planning and launch of the D-Day invasion during WWII, we reviewed the initial preparations for the operation, which commenced on 6 June, 1944 with the Normandy landings. In Part II, we covered the deception plan, Operation Fortitude.

Dr. Stephen Ambrose covered these subjects in his lectures at the University of New Orleans. He also wrote about and lectured on the Allied absolute need for security of all military areas and secrecy for all Overlord operations. Any information that reached the Nazis had to be misleading.

In Part III of our series on the preparations for Operation Overlord we cover the steps General Dwight D. “Ike” Eisenhower took to ensure secrecy during the planning of D-Day invasion.

The Allied Supreme Commander, General Dwight D. “Ike” Eisenhower, had a difficult time getting Winston Churchill to cooperate in closing the coastal areas to unauthorized visitors—a spy could easily slip in with a group of English tourists going to enjoy the seaside. It was not until Field Marshall Bernard Montgomery banned visitors from his training areas that Churchill submitted to the American request.

Eisenhower also had the British War Cabinet reluctantly ban diplomatic pouches (privileged diplomatic communications). He regarded these formerly sacrosanct international communiqués as “the gravest risk to the security of our operations.” The ban did not apply to the U.S. nor the USSR but applied to all the other allies, including the French, who protested furiously.

Through the ages commanders have worried about loose lips, and Ike was no exception. Cocktail parties were notorious occasions for careless chatter. They afforded guests the potential for an inadvertent slip of the tongue that could compromise security, or even more egregious was bragging about having inside knowledge of the operation.

Just such an occurrence happened at a party at Claridge’s hotel in London in April 1944. Purportedly after everyone had imbibed more than a few drinks, Major General Henry Miller, one of Ike’s classmates at West Point, boasted that he knew that the invasion would “come before June 15.” An incensed Eisenhower had Miller busted down to colonel and sent back to the U.S. for that one-sentence mistake.

In May, a similar episode took place with an inebriated Naval officer bragging that he knew specific launch sites, landing strengths and dates. He too was demoted and shipped back to the States. Ike wrote his boss in Washington, General George C. Marshall, that he became “so angry at the occurrence of such needless and additional hazards” that he “could cheerfully shoot the offender” himself.

One of the more intriguing stories involving the protection of the invasion plan security and deceptions used, revolves around spies such as “Garbo” and “Brutus.” Both were double agents who worked for the Germans as well as the British but tipped the scales decidedly in favor of the Allies.

Garbo, a young Spaniard named Juan Pujols, had the trust of the Abwehr, the Nazi intelligence arm. He created an imaginary network of spies and fed the Germans consistent reports that convinced them the invasion was coming at Pas de Calais. All his work was in concert with British MI5, and the German High Command deemed him so valuable that they awarded him the Iron Cross.

Brutus was a Polish Air Force Captain, Roman Garby-Czerniawski who created a network of spies in France in the early years of the war. In 1941 the Gestapo arrested him, but he convinced them that he was pro-Nazi and they sent him to Britain to work for them as a spy. He enlisted with MI5 and, as a double-agent, was a key agent in Operation Fortitude. He put together a completely fictitious Order of Battle that had Hitler convinced the invasion was coming at Calais.*

The secrecy of Operation Overlord was so paramount that Eisenhower did not brief Charles De Gaulle until June 3, 1944 when Churchill brought him over to Southwick House. The leader of the Free French feared an “Anglo-Saxon occupation of France” and was completely uncooperative. He refused to address the French people over BBC and told his officers not to accompany the American and British divisions in the invasion because “no agreement had been reached on civil administration” in France.

Churchill felt this was treasonous and wanted to send De Gaulle back to Algiers immediately, “in chains if necessary.” De Gaulle finally did address the French people in a broadcast on 6 June, 1944, but it was eight hours after Eisenhower had spoken over the airwaves. In his talk at 5:30 p.m., the French leader made no mention of the American troops. Instead he proclaimed “it is France’s battle and . . . the French will fight with fury.” Of course, he had pulled his advisors out, and except for some commandos at Sword Beach, knew full well that there were no French troops involved in the D-Day landing.

Travel on Our Operation Overlord and D-Day Tours!

Learn more about Operation Overlord and the D-Day invasion on our 2-week D-Day to the Rhine Tour!